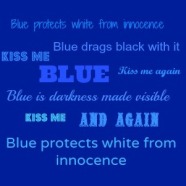 “Blue is Darkness Made Visible”: Derek Jarman’s Descent into Death 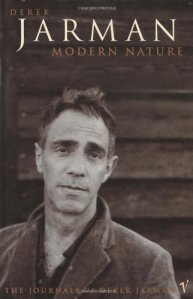 Today is the 20th anniversary of the death of English film director, stage designer, artist, gardener, author, and active advocate for gay rights, Derek Jarman. Considered one of Europe’s greatest independent film-makers, he died on the 19th of February 1994, after a six-year battle with AIDS.  In his films Jubilee (1977) – arguably the first UK punk movie, The Tempest (1979) and The Angelic Conversation (1985), Jarman presented his interpretation of the Elizabethan Age through the exploration of alchemical imagery, while in Sebastiane (1976) and Caravaggio (1986) he revived key gay and homoerotic historical figures. Therefore, his approach towards historical subject matter was highly personal.

In 1986, at the peak of his professional career, when diagnosed as HIV-positive, Jarman entered a rather prolific period of his life. Between 1986 and 1994, he wrote two books: Modern Nature (1991) and At Your Own Risk (1993); worked on his famous shingle cottage-garden; produced several paintings, and six films: The Last of England (1987), War Requiem (1988), The Garden (1990), Edward II (1991), Wittgenstein (1992), and Blue (1993). His desperate, yet productive, chase against time was dictated by the limitations of treatment for AIDS – the disease, which in the mid-1980s, was still a taboo subject of major cultural prejudice. “When I was diagnosed five years ago,” he said, “I thought I would be around for two or three years; that’s the time you were given; that changed.”(Derek Jarman, At Your Own Risk: A Saint’s Testament). 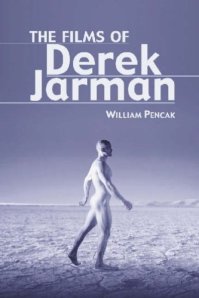 His final feature film Blue, released only four months before Jarman’s death, is a form of record of his descent into blindness and death. The film consists of a single shot of saturated blue colour filling the screen, set as a background to the narration by Jarman and his favourite actors, describing his life and vision. “The color blue was of special significance to Jarman: it represented the infinite as both possibility and “poison,” as he quoted Caravaggio’s supposed opinion of blue. …At the beginning of the film, blue represents the promise of life: “You say to the boy open your eyes,” but “When he opens his eyes and sees the light/You make him cry out.” Sight is accompanied by pain from birth, but we only focus on the positive, ignoring the cry: “O Blue” is invoked, much as a deity, to “come forth,” “arise,” “ascend,” and “come in.” Jarman, however, does not film a progression from birth to death: rather, the film recounts the poisoning of blue and the tragedy of life from the perspective of Jarman himself as a dying AIDS patient who is in the process of losing his sight. As the color “seen” by the blind, blue appears over and over again as a metaphor for the perils and unhappiness of human life. Only on occasion does happiness, again connected to the color blue, visit our troubled existence.” (William Pencak, The Films of Derek Jarman).

In the film, Jarman juxtaposes his own struggle against the problems of the public world, represented in this instance by the war in Bosnia. It seems that his personal concerns slowly overshadow the public events of the world, revealing simultaneously the bitter truth about the world’s ignorance of a singular suffering, and especially the suffering of an AIDS victim. “Blue achieves its power precisely through the equation and juxtaposition of private and public suffering. The AIDS epidemic should move us to intervene – take in victims, protect the helpless, fight the murdering virus – like the slaughter in Bosnia ultimately compelled similar reactions on the part of the NATO powers. Jarman equalizes both of these horrors by narrating them with roughly equal emphasis on a screen of unchanging blue, in which accounts of global problems alternate with the director’s sometimes excruciating description of his struggle with AIDS.” (Pencak). Then Jarman 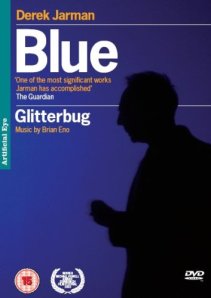 explores his personal path as a patient, through the hospital wards, where he is treated first as an outpatient, then finally, to be permanently confined to one of them. An examination of his eyes by a doctor triggers a stream-of-consciousness narrative, which takes Jarman to reflect on beauty, dreams and love. “[At] the movie’s very end, in the midst of an incredibly lyrical and erotically charged love song, Jarman is strangely reassuring about the world’s blindness. “Our name will be forgotten, in time, no one will remember our work,” he says, as if this is a good thing, because it allows us to concentrate on our love, which is what really matters. Freed from self-conception as artists, queers, or anything else, we are free to become what only death can make us, human, and hence free to realize the true potential of our estate. Beyond words, beyond names, beyond subject and object “In the pandemonium of image, I bring you the universal Blue.” (Gridley Minima).

Blue had its premiere at the Venice Biennale in June 1993. The screening of the film was quiet and uneventful, with only a small audience, one reporter and Jarman himself attending. Yet, the film gave its creator the feeling of fulfilment: “There are no plans to do another one,” he said “It’s a good end film, so I’m not too worried about that.” (Simon Garfield, Derek Jarman: Into the Blue, Independent, 14 August 1993)