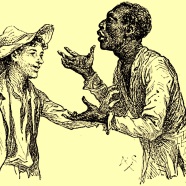 Posted by ArtLark on February 18, 2022 in Literature, Society | 5 Comments 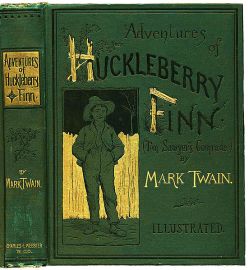 On the 18th of February 1885, Mark Twain’s The Adventures of Huckleberry Finn was first published in the United States. Twain’s picaresque novel set in the 1840s, is about a young boy called Huck who runs away from home and floats down the Mississippi River. On his way he meets a runaway slave  Jim and the two undertake a series of adventures, which slowly change Huck’s views of bigotry. He begins to distinguish right from wrong, and is ultimately faced with the moral dilemma between the world’s racial prejudice and the lessons Jim has taught him throughout the story about the evils of racism. The book attracted controversy and criticism as soon as it was released due to what was perceived as its coarse, vulgar language. It was even more frowned upon in the 20th century for its racial stereotyping, especially its frequent use of the ‘n’ word, despite strong counter-arguments that Twain and his intentions were precisely the opposite, that he intended to make a stand against racial prejudice and social injustice. Despite its problematic reception, Huck Finn has become one of the most widely taught novels in American educational institutions. Here is an excerpt from the book, in modern American English:

“The first time I got Tom in private, I asked him what his idea had been at the time of the evasion. What did he plan to do if the evasion worked and he managed to set a n—– free who had already been free before? He said he would have done the same thing he’d been planning to do from the start: If we got Jim out safely, we’d run him down the river on the raft and have adventures all the way to the mouth. Then we would have told him about him being free and taken him back home on the steamboat in style. We would pay him for his lost time and send word ahead to gather all the n—— around and have them waltz into town in a torchlit parade with a brass band.” (Chapter 43, The Adventures of Huckleberry Finn). 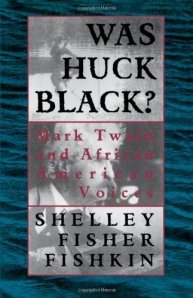 Scholars have become increasingly divided in their views of Twain’s approach to racial issues. Some applauded the humanisation of Jim, others deplored his depiction. Professor Stephen Railton of the University of Virginia claimed that Twain only did what the white community expected of him by using deeply ingrained stereotypes of black people, his writing resulting in the portrayal of a minstrel show-style comedy. On the other hand, authors such as Toni Morrison and Gore Vidal, but especially Shelley Fisher Fishkin celebrated Twain’s humour, sense of style, and compassion: “Mark Twain taught me the things I needed to know. He taught me to understand the raw racism that lay behind what I saw on the evening news. He taught me that most well-meaning people can be hurtful and myopic. He taught me to recognize the supreme irony of a country founded in freedom that continued to deny freedom to so many of its citizens. Every time I hear of another effort to kick Huck Finn out of school somewhere, I recall everything that Mark Twain taught this high school junior, and I find myself jumping into the fray.” In her book Was Huck Black?, Fishkin suggested that in Huckleberry Finn, more than in any other work, Mark Twain let African-American voices, language, and rhetorical traditions play a major role. The scholar studied the influence of African-American culture and language on the creation of Huckleberry Finn as both novel and character. “by limiting their field of inquiry to the periphery, [white scholars] have missed the ways in which African-American voices shaped Twain’s cre-ative imagination at its core”. She linked her study of Twain to the more general “need to revise our understanding of the nature of the mainstream American literary tradition” and credited Twain with helping to “open American literature to the multicultural polyphony that is its birthright and special strength”. 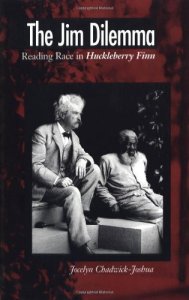 Similarly, as a response to the attacks on Twain aired in the book Satire or Evasion?: Black Perspectives on Huckleberry Finn, Jocelyn Chadwick-Joshua’s The Jim Dilemma, writer, educator, scholar and mother of a school-age child, maintained that Huck Finn can and should be read appreciatively by African Americans like herself. “The “dilemma” the character of Jim poses is multi-layered, and the audience the author addresses is likewise heterogeneous. Why do some readers, especially African American readers, fail or refuse to recognize Jim’s loyalty, intelligence, sense of duty, and magnanimity as truly heroic? Why, she continues, do some readers prefer to regard him as yet another degrading racial stereotype? The answer, she proposes, is that “the pride we should, and do at times, feel in Huck, Jim, the northern professor, Jack, and other characters too often mutates into a form of self-loathing and historical denial, our Jim dilemma.” American literary historians have told a largely segregated story: white writers come from white literary ancestors, black writers from black ones. But the truth is more complex and more interesting than this. While African-American culture had shaped Huckleberry Finn, the novel, in turn, helped shape African-American writing in the twentieth century. As Ralph Ellison commented in an interview with Fishkin, Twain “made it possible for many of us to find our own voices.”