Emma Lazarus: A Question of Liberty 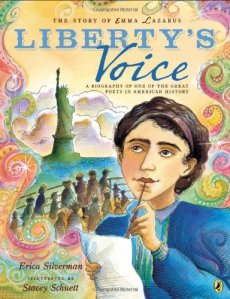 On the 22nd of July 1849, poet Emma Lazarus was born in New York City. “No poet bears so monumental a relation to Atlantic liberalism as Emma Lazarus, who is known chiefly as the author of the famous lines of “world-wide welcome” inscribed in bronze within the massive pedestal of the Statue of Liberty in New York Harbor. Her 1883 sonnet “The New Colossus” is one of the most frequently quoted poems of the nineteenth century.” (Max Cavitch, ‘Emma Lazarus and the Golem of Liberty’, American Literary History, Vol. 18, No. 1, Spring, 2006). The sonnet was written to raise funds for the pedestal at an auction held by the Art Loan Fund Exhibition in Aid of the Bartholdi Pedestal Fund for the Statue of Liberty.

Not like the brazen giant of Greek fame,
With conquering limbs astride from land to land,
Here at our sea-washed, sunset gates shall stand
A mighty woman, with a torch, whose flame
Is the imprisoned lightning, and her name
Mother of Exiles. From her beacon-hand
Glows world-wide welcome; her mild eyes command
The air-bridged harbor that twin-cities frame.
“Keep, ancient lands, your storied pomp!” cries she,
With silent lips. “Give me your tired, your poor,
Your huddled masses, yearning to breathe free;
The wretched refuse of your teaming shore-
Send these, the homeless, tempest-tost to me-
I lift my lamp beside the golden door!

These lines are “commonly invoked, for instance, whenever anyone feels that our government is acting inhospitably-thus their frequent citation in contemporary debates over post-9/11 immigration policy. But the assimilation of the ideal of liberty to the discourse of liberal complaint suppresses the strangeness and danger and contradictoriness of that ideal.” (Max Cavitch, ‘Emma Lazarus and the Golem of Liberty’, American Literary History, Vol. 18, No. 1, Spring, 2006).

The verses were written a

t a time when poverty and persecution were threatening individual liberties in America. The huge statue was commissioned to embody the nation’s commitment to this ideology of freedom. Lazarus’s decision to contribute was fuelled by her research into her Jewish ancestry – reading the George Eliot novel Daniel Deronda, and studying the history of the Russian pogroms that followed the assassination of Tsar Alexander II in 1881. It was a direct result of this anti-Semitic violence that thousands of destitute Ashkenazi Jews emigrated from the Russian Pale of Settlement – a restricted region of Imperial Russia in which permanent residency by Jews was allowed – to New York. At this point, Lazarus began to advocate on behalf of pauperised Jewish refugees and helped establish the Hebrew Technical Institute in New York to provide vocational training to help poor Jewish immigrants become self-supporting.

Max Cavitch writes that, more recently, in the States “the identification of the Statue of Liberty with the subject of liberty has become harder, rather than easier, to sustain. Widespread concern over the erosion of civil rights by recent legislation ostensibly designed, in the words of James Sensenbrenner, to “secure our liberties”( qtd. in Lichtblau) often gets viewed as somehow at odds with more “patriotic” anxiety for the safety of national icons of freedom. These icons include, most notably, the Statue of Liberty, which the federal government has placed under special protection. The world’s most famous monument to national permeability was locked down entirely for almost three years following the 9/11 attacks. While Lazarus’s sonnet continued, of course, to circulate independently of its bronze inscription (placed in the statue’s pedestal in 1903), no visitor was able to read that particular inscription until the museum and pedestal areas of the monument were reopened in August 2004 after an expensive security upgrade. The interior of the statue itself remains closed indefinitely.” (‘Emma Lazarus and the Golem of Liberty’, American Literary History, Vol. 18, No. 1, Spring, 2006).

← Herbert M. McLuhan, Creator of The Global Village Pearls of Swedish Cinema: Jan Troell’s ‘The Flight of The Eagle’ →