Posted by ArtLark on September 20, 2022 in Art, Feminism, Photography | 5 Comments

On the 20th of September 1903, German Bauhaus photographer Gertrud Arndt was born in Hantschk Ratibor, Upper Silesia. Arndt studied at the Bauhaus in Dessau (under Klee, Gropius and Itten), where she subsequently also taught. Her primary discipline was weaving, her textile designs showcasing the rigid geometric pattern-making typical of the Bauhaus aesthetic.

“She must have felt so optimistic. When Gertrud Arndt arrived at the Bauhaus school of art and design in 1923, she was a gifted, spirited 20-year-old who had won a scholarship to pay for her studies. Having spent several years working as an apprentice to a firm of architects, she had set her heart on studying architecture. No chance. The Bauhaus was in tumult because of the long-running battle between its founding director, the architect Walter Gropius, and one of its most charismatic teachers, Johannes Itten, who wanted to use the school as a vehicle for his quasi-spiritual approach to art and design. Arndt was told that there was no architecture course for her to join and was dispatched to the weaving workshop. Not that she was alone. Most of the other female students had been forced to study the supposedly “feminine” subjects of weaving or ceramics too. The Bauhaus Archive in Berlin is now trying to make amends to the women like them, who felt marginalized at the school, by celebrating their work in the “Female Bauhaus” series of exhibitions, the latest of which is devoted to Arndt.” (Alice Rawsthorn, ‘Female Pioneers of the Bauhaus’, The New York Times, March 22, 2013). Why did a supposedly progressive school turn out to be so misogynistic? The Bauhaus, which ran from 1919 to 1933, was not always unfair to women. It was only in the early years that female students were relegated to particular courses, despite Gropius’s claim in the school’s manifesto that it welcomed “any person of good repute, without regard to age or sex.” The situation improved after Gropius succeeded in ousting Itten in 1923 and replac

ed him with the radical Hungarian artist and designer Laszlo Moholy-Nagy; unfortunately Arndt was too late to directly benefit from these changes.

In her private photographic studies, however, Arndt revealed a completely different, unique and confident style. “The photographic work of Arndt was relatively unknown until she first exhibited her self-portraits in 1979 at the Museum Folkwang in Essen, Germany. Although her photographic period lasted less than five years, Arndt ended up taking portraits, photographing herself and her friends in a range of costumes, hairstyles, facial expressions and stage settings. Creating various atmospheres in these works, ranging from severe to absurd to playful, these photographs were to become her Masked Portraits and are considered by art critics to be the predecessors to the works of Cindy Sherman.” (Angela Connor, ‘Before Cindy Sherman came Gertrud Arndt’, Berlin Art Link, Monday, Mar. 11, 2013). Arndt’s theatrical self portraits, all taken around 1930, started “Out of boredom,” she said; they are black and white images of the artist’s upper torso and head in veiled headdress, dressed in fanciful robes, often with eyelids half closed, in poses which vary from distinguished and outraged to lascivious and sensual. The transformation from lady to little 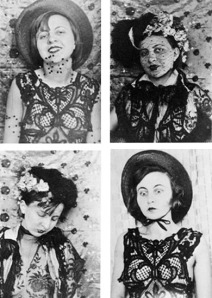 girl is helped by various female accessories; these enable the interpretation of female poses, from formal and traditional to frivolous and lewd. To this day, however, it is unclear how Arndt saw her real self. Her ironic images still seem to have a fresh playfulness about them. Forgotten by critics until the 1980s, her portraits have been compared to the work of her contemporaries Marta Astfalck-Vietz and Claude Cahun. They also clearly predate the self-projections of feminist artists Cindy Sherman, Sophie Calle and Gillian Wearing, photographers who today alienate themselves in ever new disguises beyond recognition and then use the trigger to capture these metamorphoses. Arndt simply described her work process:

“So I sat on a chair with no back. The apparatus stood in front of a large window – we had huge windows in Dessau. And then, I had this old machine – which had no self-timer – I took a length of black twine, fixed it under a round stone, so that my camera could not fall over. The stands were so shaky – they did not have the iron spikes in those days yet. I sat down very carefully and looked into the camera. Behind me, I had a broom to which I hung a newspaper to help set the focus: I gave the broom a push and as it fell down, I took my snap. Quite simply, this is how all my mask photos were created.” (The Hidden Museum, photographs of Bauhaus artist Gertrud Arndt, Berlin 1994).

Although Arndt’s pictures seem to be the outcome of fun experiments, one wonders whether in the patriarchal Bauhaus climate, they could raise equally challenging questions about the role and representation of women in society, as well as the nature of the creation of art itself. Elements of social role-play and sexual stereotyping present in the art of future female photographers can be equally read into Arndt’s ‘mask’ images. When asked what she was thinking when she was posing for her staged self-portraits, contemporary artist Cindy Sherman said: “I think of becoming a different person. I look into a mirror next to the camera . . . it’s trance-like. By staring into it I try to become that character through the lens. It seems to work out, it sounds like meditation. But something happens that makes it more fun for me because I have no control over it. Something else takes over. (…) I think people are more apt to believe photographs (…) Even if they know it’s fake they can believe anything. People are accustomed to being told what to believe in. (…) I went into photography because it seemed like a fast way to say what you want rather than laboriously making something look real. ” (Betsy Sussler, ‘Cindy Sherman’, interview with this artist, Bomb Magazine 12, Spring 1985). Like Sherman, Arndt

did not use a specific narrative and did not serialise her photographs around a certain theme. They were simply instantaneous moments of emotion captured on film. One can argue that they become conceptual pieces, as the viewer can fill in the story of each photograph – they continue their creative journey in our own minds.