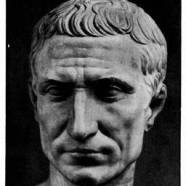 The Mercantile Reign of Julius Caesar

On the 12th or of July 100 BC Julius Caesar is believed to have been born in Rome, Italy, although this date is debatable. A legendary historical figure, he is renown for opposing the military dictator Sulla as a teenager and almost losing his life over it. In his illustrious military career he was decorated for courage in battle, was captured and held to ransom by pirates. As a popular leader, he almost bankrupted himself by staging games for the masses and became notorious as a dangerously ambitious maverick. Politically, he became Consul when he was barely in his 30s and ended up dominating the Senate. As for his international expansion, he conquered all of Gaul, invaded Germany, and twice landed in Britain – an achievement which in 55 BC turned him into a God-like figure in the eyes of his contemporaries. It took Caesar only thirty years to turn from a nobody into one of the richest men the world has ever seen, capable of overthrowing the Republic and becoming emperor of most of the world discovered up to that point in history.

The ways in which he made his fortune were unimaginably cruel to modern sensibilities. During his conquests, he often bought large numbers of men, women, and children through merchants and sold them on as slaves. “It would have been quite normal for the era if most of the women were raped by the soldiers before this occurred. A share of the purchase price would also have gone to all of the legionaries, with larger shares to the centurions and tribunes. The sale of war captives was one source of profit. Another was plunder, though this is rarely mentioned in the Commentaries. Caesar says that the Gauls had many sacred sites where gold and precious objects had been dedicated to the gods and left piled up in public view. All the tribes respected these sacred sites and no one dared to steal from them. According to Suetonius,

Caesar was unimpressed by such taboos and never failed to loot them. The wealth he was gaining restored his own finances, but as ever his main interest in money was to use it to buy friends and popularity, both with his army and back in Italy.” (Adrian Goldsmith, Caesar, 2007).

“Caesar was carried from step to step by the demands of a personal career which was in its turn driven by his desire to succeed as a Roman aristocrat in the social, political, and economic world created by the value-system and beliefs of the governing class of the late Republic. These demands were often financial. Wolfgang Will points the finger at the neglect of Caesar’s material wealth by historians, and quotes Bertolt Brecht’s observation that Mommsen devoted a whole chapter to Caesar’s qualities, but not a single line to his income. ‘Modern history‘, he goes on, ‘holds to Hegel’s dictum, that Caesar to a supreme degree did the business of the spirit of the age (die Geschafte des Weltgeistes betrieb). But if men without qualities, but not men without money, could have careers, surely the business smelt of money‘.” (John Carter,  review of A Revaluation of Julius Caesar/ Julius Caesar: Eine Bilanz by Wolfgang Will, The Classical Review, New Series, Vol. 43, No. 2, 1993).

A series of books were written on Julius Caesar in the post WW II period (especially by German historians) and following the end of Hitler, most likely due to a need for

a better understanding of how the mind of a dictator worked and the historical circumstances which allowed such reigns to develop. In A Revaluation of Julius Caesar(1993), Wolfgang Will could arguably not bring anything new to the table and John Carter claimed that he could not offer a “new picture of ‘Caesar’s greatness’, because this is an illusion”. Will concluded that ‘Caesar was an office-holder in a collapsing republic, the most capable perhaps, but nothing more. He owed his rise less to the daring of his ideas than to business (Geschafte) which had little in common with that of the Hegelian spirit of the age.” There are thus less researched areas in the dictator’s career, such as the economic aspect, which suggest that he was a very cunning businessman and that his reputation owed a lot more to his enterprising spirit, than his strategic thinking or bravery.

← Nash and the Neo-Romantic Landscapel Piero Manzoni: Scatology and Art →