Home » Books » Beyond Sound and Vision: Helen Keller and the Story of Her Life

Beyond Sound and Vision: Helen Keller and the Story of Her Life

On the 27th of June 1880, the remarkable American author, political activist, and lecturer Helen Keller was born in Tuscumbia, Alabama. In her autobiography The Story of My Life, which she wrote aged twenty-two, Keller recalls her early years: “The beginning of my life was simple and much like every other little life. I came, I saw, I conquered, as the first baby in the family always does. …I am told that while I was still in long dresses I showed many signs of an eager, self-asserting disposition. Everything that I saw other people do I insisted upon imitating. At six months I could pipe out “How d’ye,” and one day I attracted every one’s attention by saying “Tea, tea, tea” quite plainly. …Then in the dreary month of February, came the illness which closed my eyes and ears and plunged me into the unconsciousness of a new-born baby.”

At nineteenth months Keller contracted either scarlet fever or meningitis which left her both deaf and blind. For some time it was believed that she would remain trapped in a world of her own, but she soon surprised everyone. A determined child, she started using the senses of touch, smell, and taste to connect with the outside world. Her first attempts at communication were signs, initially only understood by the six-year old daughter of the family cook, proving that child’s perception and ability to communicate lies beyond the medium of spoken language. As she grew over the years, she developed sixty signs to express herself: putting on glasses and pretending to read a newspaper was the sign for her father, patting her cheek indicated her mother, sucking her thumb meant her new baby sister, and so on. At the age of six, young Keller, following the advice of Alexander Graham Bell, was referred to the Perkins Institute for the Blind in Boston to seek help with her further education. She was assigned assistance by a visually impaired former student of the Institute, Anne Sullivan, who became her instructor, governess and friend for over forty-nine years until her death in 1936.

Sullivan recognized the importance of Keller understanding language and immediately began spelling words into her charge’s hand using the manual alphabet. But at first the connection between words and particular objects was beyond Keller’s comprehension. A memorable breakthrough occured on the 5th of April 1887: “We walked down the path to the well-house, attracted by the fragrance of the honeysuckle with which it was covered. Some one was drawing water and my teacher placed my hand under the spout. As the cool water gushed over one hand she spelled the word water, first slowly, then rapidly. I stood still, my whole attention fixed upon the motions of her fingers. Suddenly I felt a misty consciousness as of something forgotten – a thrill of returning thought; and somehow the mystery of language was revealed to me. I knew then that “w-a-t-e-r” meant the wonderful cool something that was flowing over my hand.” (Helen Keller, The Story of My Life). From then on, Keller was unstoppable in her eagerness to learn the manual alphabet and express herself fully, revealing her extraordinary intellectual capacity. Throughout the years, and with help of other teachers, she learnt how to read, write and even speak, and followed the path of formal education.  In 1904, at the age of twenty four, Keller became the first deaf-blind person to earn a Bachelor of Arts degree. She eventually became a world-famous author and public speaker, advocate for people with disabilities and an active political campaigner. 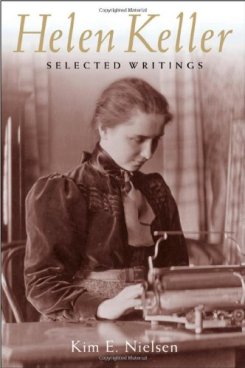 At the beginning of the twentieth century very little was known on the abilities of deaf and blind people and their comprehension of the world. For example, according to one of the critics announcing the publication of the Matilda Ziegler Magazine for the Blind: “Many poems and stories must be omitted because they deal with sight. Allusion to moonbeams, rainbows, starlight, clouds, and beautiful scenery may not be printed, because they serve to emphasize the blind man’s sense of his affliction.” (Kim E. Nielsen, Helen Keller: Selected Writings). Keller’s reaction to the statement was very strong, leaving no doubt about people’s general ignorance on the subject. Keller wrote: “That is to say, I may not talk about beautiful mansions and gardens because I am poor. I may not read about Paris and the West Indies because I cannot visit them in their territorial reality. I may not dream of heaven because it is possible that I may never go there. Yet a venturesome spirit impels me to use words of sight and sound whose meaning I can guess only from analogy and fancy. …Allusions to moonbeams and clouds do not emphasize the sense of my affliction: they carry my soul beyond affliction’s narrow actuality. Critics delight to tell us what we cannot do. They assume that blindness and deafness sever us completely from the things which the seeing and the hearing enjoy, and hence they assert we have no moral right to talk about beauty, the skies, mountains, the song of birds, and colors. They declare that the very sensations we have from the sense of touch are “vicarious”, as though our friends felt the sun for us! They deny a priori what they have not seen and I have felt. Some brave doubters have gone so far even as to deny my existence. In order, therefore, that I may know that I exist, I resort to Descartes’s method: “I think, therefore I am.” Thus I am metaphysically established, and I throw upon the doubters the burden of proving my non-existence.” (Nielsen)

← WWII Heroines: Violette Szabo The Wings of Rubens’ Virgin as Woman of the Apocalypse →