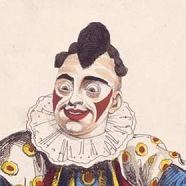 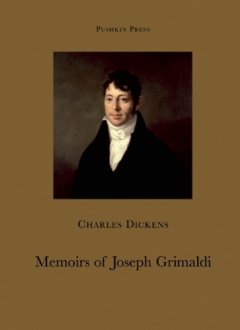 On the 31st of May 1837, Joseph Grimaldi, the most popular entertainer of the Regency period, died in Islington, Greater London, England. His death, precipitated by depression and alcoholism, as well as frequent injuries caused by his risky on-stage behaviour, was a sad coda to his most exciting life. Known as the inventor of the famous pantomime catchphrase “Here we are again!”, Grimaldi was introduced to the stage by his father, Signor Giuseppe Grimaldi, ballet master at Sadler’s Wells, at the early age of two. Grimaldi liked to play Harlequin and Pantaloon as well as a clownish bumpkin, for which he became immensely popular. Because of him, to this day, the nickname for a circus Clown is ‘Joey’. Among his numerous fans was the young Charles Dickens who at the age of seven and eight saw the Clown Joseph Grimaldi perform in Christmas pantomimes. His astonishment with the Clown was so great that nearly twenty years later Dickens undertook the task of editing a version of Grimaldi’s memoirs.

By seven, Grimaldi was already a well know entertainer, performing for audiences either at Drury Lane or Sadler’s Wells, or later also at Covent Garden theatres. “… [H]e confirmed his status through the accumulation of regular injuries, the first acquired at Sadler’s Wells playing the Signor’s monkey, led by a chain attached to his waist that the Signor would use to swing him around his head ‘with the utmost velocity’. One night it broke, hurling Joe into the lap of a gentleman seated way back in the pit. Another time, playing a cat in Hurly Burly, the Drury Lane pantomime for Boxing Day 1785, Joe ran onstage in costume only to fall thirty feet through an open trap because someone had forgotten to cut eye-holes in his suit. He was lucky to break only his collarbone, but was unable to perform again until the Sadler’s Wells season opened the following Easter.” (Andrew McConnell Stott, The

Pantomime Life of Joseph Grimaldi). On some other occasion, in 1801, overtaken by grief after his wife and unborn child’s death, he shot himself in the foot during The Great Devil’s performance. After this accident, he was confined to bed for five weeks. Subsequently, more injuries, such as broken bones, wrenched muscles or wounds with swords or pistols were involved in the cause of fun, gaining him the most favourable acclaim. Grimaldi was singled out by The Times for his successful masochism in the Covent Garden pantomime of 1812-13, Harlequin and the Red Dwarf: “Grimaldi is the most assiduous of all imaginable buffoons, and it is absolutely surprising that any human head or hide can resist the rough trials which he volunteers. Serious tumbles from serious heights, innumerable kicks, and incessant beatings, come on him as matters of common occurrence, and leave him every night fresh and free for the next night’s flagellation.” (Richard Findlater, Joe Grimaldi, His Life and Theatre)

Grimaldi appeared on stage dressed in red, white, and blue motley, signalling ‘Joey’ to the audience with a special costume and makeup: the chalky face was cut with a gaud of red paint on each cheek, and a blue, crested wig capped the expressive countenance. He quickly became the most famous Clown in London, gradually reshaping the perception of comedy and the Clown character as well. In his performances, he satirised many aspects of contemporary British life, and mocked absurdities of lifestyle and fashion at the time. However, compared with his contemporaries, Grimaldi was a gentle and good-humoured Clown, and his buffoonery was only a facet of his comic genius. Eventually, Grimaldi transformed the figure of the Clown from a pratfalling country bumpkin into the most important character in the harlequinade, on occasions even more important than Harlequin. His performances appealed to different audiences (Drury Lane was associated with the wealthy classes of society, whilst Sadler’s Wells with the boisterous working class), and catered for various tastes. This does not mean however that he found the golden mean in order to do so. With his mockery and jokes he merely signalled the existence of a certain preconditioned human need – the need for laughter that enables to distance oneself from the otherwise rigid

social order ridiculed for this instance by the Clown’s performance. “The clown, in fact, rather confirms than undermines the mythological order. There is no identification of the spectators with the medieval jester, with Arlequino or Chaplin’s Charlie. On the contrary, the comical effect of the clown is founded on the distance between him and his audience. He is a counter image of the sublime from which the audience is separated by an equally large distance. The spectator is the man in the middle, participating neither in the world of the angels nor that of the devil. The clown, in spite of his monstrosity, is still human enough to serve as an object of comparison; but the gods and the mythological masters also have human features. Man feels painfully his separation from the unattainable heights of those above him, but his pain is alleviated by the discovery that there still exists somebody as far removed from man as man is from God. The merry laughter about the clown is not different from the laughter of the children in front of a monkey cage.” (Wolfgang M. Zucker, The Image of the Clown, The Journal of Aesthetics and Art Criticism, Vol. 12, No. 3, Mar., 1954)

← Rubens in Today’s Art Market: Priceless vs. Over-Priced Paco Peña: Flamenco and the Question of National Identity in Spain →