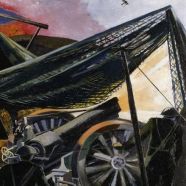 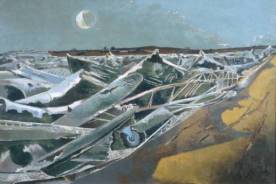 On the 11th of May 1889, British Surrealist painter and war artist Paul Nash was born in London. The older brother of the artist John Nash, he started his professional education at the Chelsea Polytechnic, from which he moved on to the London County Council School of Photo-engraving and Lithography. Eventually, after being spotted by Selwyn Image, and following his advice, he entered the Slade School of Art at University College, London, where he studied drawing under Professor Henry Tonks. He came relatively late to oil painting and only began to use it regularly for his commissions as a war artist around 1917, when, after suffering an injury on the Western Front he was sent back to London to recuperate. Having experienced firsthand the harshness and brutality of war, he immersed himself in producing the most captivating landscapes which confronted the ideal of the poetic landscape with the physical consequences of war.

One of his most iconic war paintings is probably the 1941 Totes Meer (Dead Sea), which holds much greater strength and depth than his First World War paintings. Totes Meer, commissioned by the War Artists Advisory Committee, was an immediate success when displayed at the National Gallery in London in May 1941; it was called by the WAAC’s chairman, Kenneth Clark, ‘the best war picture so far’. The wings and fuselages of the destroyed German aircraft, which in the painting resemble the waves and tides of a rough sea, were based upon sketches and photographs made by Nash at the Cowley dump near his home in Oxford. In a 1941 letter to Kenneth Clark, Nash wrote: “Totes Meer Dead Sea (very much not The Dead Sea of course). Based on actual scene. One of the larger dumps devoted to wrecked German planes alone. You will remember the set of photographs I showed you. The thing looked to me suddenly, like a great inundating sea. You might feel – under certain influences – a moonlight night for instance – this is a vast tide moving across the fields, the breakers rearing up & crashing on the plain. And then, no; nothing moves, it is not

water or even ice, it is something static and dead. It is metal piled up, wreckage. It is hundreds & hundreds of flying creatures which invaded these shores (how many Nazi planes have been shot down or otherwise wrecked in this country since they first invaded?). Well, here they are, or some of them. By moonlight, the waning moon, one could swear they began to move & twist & turn as they did in the air. A sort of rigor mortis? No, they are quite dead & still. The only moving creature is the white owl flying low over the bodies of the other predatory creatures, raking the shadows for rats & voles. She isn’t there, of course, as a symbol quite so much as the form & colour essential just there to link up with the cloud fringe overhead.” (Peter Stansky, London’s Burning: Life, Death and Art in the Second World War)

The symbolic juxtaposition of destroyed German bombers with the serenity of British landscape represents unquestionably the triumph of Britain over Germany. Nash stated:  “Dead Sea is not entirely a fantasy. It was inspired by an actual phenomenon. …It symbolizes the defeat of Germany’s aerial invasion of England in 1940 when between August & October 2,375 Nazi planes were destroyed.” (Stansky). However, Nash’s poetic description of how the painting emerged – of “one of the larger dumps” transforming into an “inundating sea” – provokes even more metaphorical interpretation. This interpretation reaches far beyond the theme of nations as organic entities and stresses the insignificance of human conflict within the context of nature – after all, the inorganic man-made forms in the painting seem to be slowly giving in to the consuming natural forces of both the soil and the moonlight. The interplay between organic and inorganic elements in Nash’s painting, and their eventual merging into one is supported by the artist’s zoomorphic perception of the flying machines. For example, in his 1943 letter to the art dealer Dudley Tooth, Nash describes airplanes as if they were living creatures: “When I came to study airplanes I found in them the same evidence of personality as I saw in trees and stones, except that the animal resemblance was more pronounced. The personality, in fact, was seldom a mechanised 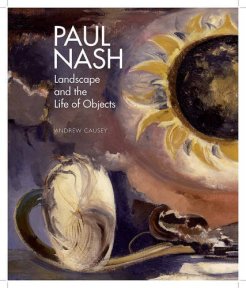 one, and aerial creatures though they were, this confirmation suggested most often the inhabitants of the earth or the sea – when it did not conjure up the monsters of pre-history. …So, for some time, I persisted in my preoccupation of the monsters in the fields although I made other studies of planes in flight, but very few quite isolated from the land below. It was this research that led me to the larger concern of broken German planes in the mass which suggested to my mind the large painting Totes Meer. Although Totes Meer had a direct bearing on the Battle of Britain, I wanted to express in aerial terms the triumph of that victory. …Landscape at night has always fascinated me. …By the end of 1940 I had to a great degree exhausted my interest in the personality of air planes.” (Stansky)

Despite its contemplative character, Totes Meer ended up being used for a pragmatic purpose, as anti-Nazi propaganda. “Nash saw further propaganda possibilities in this painting and he anxiously sought out official figures of the numbers of planes brought down – information that could be printed on the back of a postcard reproduction and then dropped over Germany. The message was clear Britain’s borders are absolute and its defence unforgiving, every Nazi invader is repelled or defeated and then added to victorious tally. Nash was prepared to alter and corrupt the image further. Taking a postcard sized reproduction he added a photograph of Hitler’s head. Perhaps the end result loses the coldness of the original, but the joke and ambition is clear.” (BBC)