Home » Aesthetics » Kant on the Feeling of Beautiful and Sublime 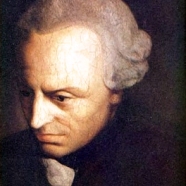 Kant on the Feeling of Beautiful and Sublime

On the 22nd of April 1724, Immanuel Kant was born in Königsberg, Prussia. The German philosopher discussed the subjective nature of aesthetic qualities and experiences in Observations on the Feeling of the Beautiful and Sublime, (1764): 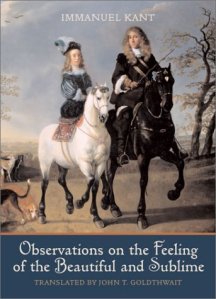 “Philosophical eyes are microscopic.  Their view is exact but small and their intention is truth.  The sensible [sinnliche] view is bold and provides fanciful excess that is moving although only it will only be encountered in the imagination.

Beautiful and sublime are not the same.  The former swells the heart and makes the attention fixed and tense thereby tiring it. The latter lets the heart melt in a kind of softish sensation and, as it leaves the nerves behind here, the feeling becomes a gentler emotion which, if it goes too far, transforms into feebleness, boredom, and disgust.

The sublime must always be great; the beautiful can also be small. The sublime must be simple; the beautiful can be adorned and ornamented. A great height is just as sublime as a great depth, except that the latter is accompanied with the
sensation of shuddering, the former with one of wonder. Hence the latter feeling can be the terrifying sublime, and the former the noble. The sight of an Egyptian pyramid, as Hasselquist reports, moves one far more than one can imagine from all the descriptions; but its design is simple and noble. St. Peter’s in Rome is splendid; because on its frame, which is large and simple, beauty is so distributed, for example, gold, mosaic work, and so on, that the feeling of the sublime still strikes through with the greatest effect; hence the object is called splendid. An arsenal must be noble and simple, a residence castle splendid, and a pleasure palace beautiful and ornamented. “