Kostis Palamas and the Olympic Anthem

“And then I saw that I am the poet, surely a poet among many a mere soldier of the verse, but always the poet who desires to close within his verse the longings and questionings of the universal man, and the cares and fanaticism of the citizen. I may not be a worthy citizen; but it cannot be that I am the poet of myself alone. I am the poet of my age and of my race. And what I hold within me cannot be divided from the world without.” (Kostis Palamas, Preface to The Twelve Words of the Gypsy)

On the 13th of January 1859, Kostis Palamas was born in Patras, Greece. Considered one of the foremost poets of modern Greece, Palamas is valued for his lyrical expression of the national sufferings and aspirations of the Greeks and for the characteristic fusion of Greek history, mythology, and philosophy with various contemporary European ideas. According to Eugène Clement, “Kostis Palamas… is raised not only above other poets of Modern Greece but above all the poets of contemporary Europe. Though he is not the most known… he is incontestably the greatest.” (Eugène Clement, Revue des Études Grecques).

After moving to Athens in 1875 (where he stayed until his death in 1943), Palamas became acquainted with such Western-minded critics as E. Rhoidis, A. Vlachos and J. Papadiamantopoulos (Jean Moréas). Together they formed a new literary group called the new school of Athens. “Its members, who began to write around 1880, realised that a literary change must start with a change in language, and they therefore decided to use the demotic or popular language in their compositions. Their immediate purpose was to break away from the style of their predecessors; and since they identified purism with romanticism, they also turned against romanticism in general and the romantic excess of rhetorical diffuseness and redundancy in particular”. (S. A. Sofroniou, The

Parnassianism of Kostis Palamas, The Slavonic and East European Review, Vol. 38, No. 90, December, 1959). The reaction of the young Greek demotic poets against romanticism was similar to that of French Parnassians, and even more reminiscent of the French example in their attraction to classical and Hellenistic Greece. By breaking away from the use of archaic language, that until then had monopolised classical Greek culture, the demotic poets were trying to prove that Greekness, and its love of classical subjects, could be expressed in popular language without diminishing any of its cultural significance. Palamas, as the biggest sympathiser of the Parnassian ideas, became eventually the leader of the new school.

In 1930 Romain Rolland described Palamas as Europe’s greatest poet at the time and nominated him for the Nobel Prize. Two years later, Marcel Brion referred to The Twelve Words of the Gypsy by Palamas as the most original and the most powerful creation in contemporary Greek poetry. “The Twelve Words of the Gypsy is set in the environs of Constantinople around the time of the “fall”. The hero, an uncompromising revolutionary and insatiable curious gypsy – the personification of freedom of thought and unrestrained action – successively (during the first eight words) rejects or finds unsatisfying work, religion, learning, motherland, hope, everything. But then, in the ninth word he discovers a violin, a symbol of art which enables him to perceive harmony in the midst of a life full of meaningless confusion, and to embark 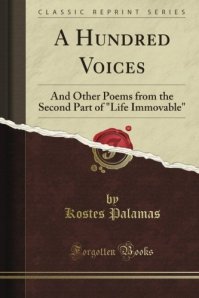 upon his creative ascent, which corresponds to the descent of the first eight words. On a personal level then, the poem is “the story of the salvation of the soul through art,” as Dhëmaras, the greatest of modern Greek critics puts it, or as the symbol of free thought, as other maintain. On the other hand, the poem is full of images symbolizing both the depressing decadence and the anticipated national  resurrection of modern Greece.” (Review by: Theofanis G. Stavrou, Slavic Review, Vol. 30, No. 2, June, 1971).

There is also another reason for which Kostis Palamas should be remembered; especially with the 2014 Winter Olympics in Sochi technically around the corner. In 1896, Kostis wrote the lyrics to the Olympic anthem, also called the Olympic hymn, to which the music was composed by his friend, Spyros Samaras. The Olympic anthem was first performed at the 1896 Olympic opening ceremonies, and then again in 1906. Thereafter, a variety of musical offerings provided the background to the opening ceremonies until 1960, when it was decided to make of the Palamas/Samaras hymn the official Olympic anthem.

Father of the true, beautiful and good

Descend, appear, shed over us thy light

Upon this ground and under this sky

Which has first witnessed thy unperishable fame

Give life and animation to these noble games!

Throw wreaths of fadeless flowers to the victors

In the race and in the strife

Create in our breasts, hearts of steel!

In thy light, plains, mountains and seas

Shine in a roseate hue and form a vast temple

To which all nations throng to adore thee