Home » Books » The Good Soldier Švejk: A Fool Against the System

The Good Soldier Švejk: A Fool Against the System

Posted by ArtLark on January 3, 2022 in Books, Literature | 2 Comments

“When Švejk subsequently described life in the lunatic asylum, he did so in exceptionally eulogistic terms: ‘I really don’t know why those loonies get so angry when they’re kept there. You can crawl naked on the floor, howl like a jackal, rage and bite. If anyone did this anywhere on the promenade people would be astonished, but there it’s the most common or garden thing to do. There’s a freedom there which not even Socialists have ever dreamed of.’” (Jaroslav Hašek, The Good Soldier Švejk)

On the 3rd of January 1923, Jaroslav Hašek, aged only 39, died of heart failure in Lipnice nad Sázavou, Czechoslovakia. The death of this bohemian Czech writer – controversial in his life as much as in his writing – came way too early and left an undeniable void in Czech literature. In fact, at the time of his passing, Hašek was about to begin the fourth volume of a dark humorous comedy about the adventures of The Good Soldier Švejk, out of the originally planned six.

The story of a coarse Czech, who willingly or unwillingly – through his feigned dumbness or genuine incompetence undermines the authority of the Austrian monarchy and exposes the stupidity of its military system, has been translated by 2013 into 58 languages, making of Švejk  one of the most explicit national literary heroes. The question of how much of Hašek is in Švejk or how much Švejk was in Hašek seems a natural one, as the writer’s colourful and hedonistic life was to an extent a dark comedy too. “Bigamist, closet homosexual, chronic alcoholic, disciplined revolutionary, intellectual parasite, mentor of the venerable Suke Bator, who was the Mongolian Lenin – these are a few of the many labels attached to [Hašek’s] name.” (Peter Steiner, The Deserts of Bohemia: Czech Fiction and Its Social Context). But Hašek was most of all an anarchist, who stood strongly against the Austrio-Hungarian Empire. Thus, Švejk’s words at the beginning of the novel: “Long live our Emperor, Franz Joseph I, gentlemen”, reveal a mocking tone of Hašek’s attitude towards the Austrio-Hungarian rule. And the sarcasm that shines through these words is reminiscent of Hašek’s political endeavours, such as The Party of Moderate Progress Within the Limits of the Law, set up by Hašek as a spoof of conservative political action under Austro-Hungarians. Therefore The Good Soldier Švejk, despite being judged by some as “not much of a work of art, as it is full of low humor and cheap propaganda” (René Wellek [in:] Steiner), has a much more serious, anti-authoritarian and anti-system message than it would seem at first glance.

The underlying political and, to some extent, ideological context of Hašek’s novel has been remarked by Karel Kosik in his essay Hašek and Kafka, in which he investigates on similarities (or differences) of Hašek’s Josef Švejk and Josef K. from Kafka’s Trial. Kosik wrote: “Švejk’s “odyssey under the honourable escort of two soldiers with bayonets” takes him from the Hradčany garrison jail along Neruda Street to Malá Strana and over Charles Bridge to Karlín. It is an interesting group of three people: two guards escorting a delinquent. From the opposite direction over Charles Bridge and up to Strahov, another trio makes its way. This is the threesome from Kafka’s Trial: two guards leading a “delinquent,” the bank clerk Josef K., to the Strahov quarries, where one of them will “thrust a knife into his heart.” Both groups pass through the same places, but meeting each other is impossible.” (Steiner).

These two escorts set in comparison are rather symbolic – the first one leading its “delinquent” to freedom, and the second one to death. Both characters are victims of the system and represent two different approaches to its supremacy. “Kafka’s man is walled into a labyrinth of petrified possibilities, alienated relationships and materialism of daily life, all these growing to supernaturally phantasmagoric dimensions, while he constantly and with unrelenting passion searches for 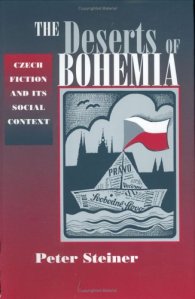 the truth. Kafka’s man is condemned to live in a world in which the only human dignity is the interpretation of that world; while other forces, beyond the control of any individual, determine the course of world’s change.” (Peter Steiner, Tropos Kynikos: Jaroslav Hašek’s “The Good Soldier Švejk”, Poetics Today, Vol. 19, No. 4, Winter, 1998). On the other hand Hašek’s character proves that “man, even in a reified form, is still man, and that man is both the object and the producer of reification… [That] man cannot be reduced to an object, he is more than a system.” (Ibid.).

It seems that in order to fight the system, Švejk’s method proved to be more effective than that of Josef K.’s. This is not to say that Švejk did not try to understand the system. However, by being ignorant of it, or approaching it under the guise of a fool, he managed to stay outside of its destructive mechanisms. Josef  Švejk, unlike Josepf K., by using precisely the system’s own means, caused its inner erosion and thus led himself to freedom. Therefore, following his own words it is justified to say: Long live the fool! Long live  Josef  Švejk!