Home » Books » The Awakening of Joyce’s Lust for Beauty 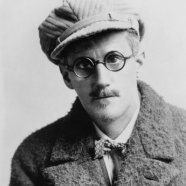 The Awakening of Joyce’s Lust for Beauty

For those soul-searching, here is an excerpt from  A Portrait of the Artist as a Young Man, the first novel of Irish writer James Joyce (1882 – 1941). This autobiographical Künstlerroman is unprecedented in literature for its use of free indirect speech prefiguring Joyce’s stream of consciousness technique. American modernist poet Ezra Pound had the novel published in book format for the first time by B. W. Huebsch in New York, on the 29th of December 1916. The following passage captures one of the Joyce’s best-known epiphanies, his youthful infatuation with beauty – the seed of creativity:

“A girl stood before him in midstream, alone and still, gazing out to sea. She seemed like one whom magic had changed into the likeness of a strange and beautiful seabird. Her long slender bare legs were delicate as a crane’s and pure save where an emerald trail of seaweed had fashioned itself as a sign upon the flesh. Her thighs, fuller and soft-hued as ivory, were bared almost to the hips, where the white fringes of her drawers were like feathering of soft white down. Her slate-blue skirts were kilted boldly about her waist and dovetailed behind her. Her bosom was as a bird’s, soft and slight, slight and soft as the breast of some dark-plumaged dove. But her long fair hair was girlish: and girlish, and touched with the wonder of mortal beauty, her face.

She was alone and still, gazing out to sea; and when she felt his presence and the worship of his eyes her eyes turned to him in quiet sufferance of his gaze, without shame or wantonness. Long, long she suffered his gaze and then quietly withdrew her eyes from his and bent them towards the stream, gently stirring the water with her foot hither and thither. The first faint noise of gently moving water broke the silence, low and faint and whispering, faint as the bells of sleep; hither and thither, hither and thither; and a faint flame trembled on her cheek.

He turned away from her suddenly and set off across the strand. His cheeks were aflame; his body was aglow; his limbs were trembling. On and on and on and on he strode, far out over the sands, singing wildly to the sea, crying to greet the advent of the life that had cried to him. Her image had passed into his soul for ever and no word had broken the holy silence of his ecstasy. Her eyes had called him and his soul had leaped at the call. To live, to err, to fall, to triumph, to recreate life out of life! A wild angel had appeared to him, the angel of mortal youth and beauty, an envoy from the fair courts of life, to throw open before him in an instant of ecstasy the gates of all the ways of error and glory. On and on and on and on!”

← How to Read a Book Guru Ramana Maharshi on Meditation →