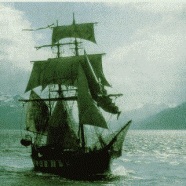 Posted by ArtLark on December 27, 2021 in Anthropology, Books | 6 Comments

Here is something for those explorers planning a new year full of exciting travels! On the 27th of December 1831, Charles Darwin (1809 – 1882) embarked on his first journey aboard the HMS Beagle, during which he began to formulate the theory of evolution. The trip lasted almost 5 years taking him from Plymouth to Rio, then around the world to Mauritius then back to Falmouth. The result of the expedition was his Journal of Researches into the Natural History and Geology of the countries visited during this voyage on the Beagle, under the command of Captain Fitz Roy, R.N. Its first edition was published May 1839: 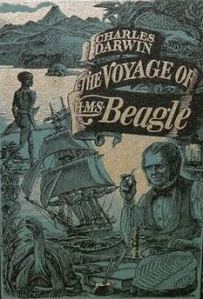 “July 5th, 1832.—In the morning we got under way, and stood out of the splendid harbour of Rio de Janeiro. In our passage to the Plata, we saw nothing particular, excepting on one day a great shoal of porpoises, many hundreds in number. The whole sea was in places furrowed by them; and a most extraordinary spectacle was presented, as hundreds, proceeding together by jumps, in which their whole bodies were exposed, thus cut the water. When the ship was running nine knots an hour, these animals could cross and recross the bows with the greatest ease, and then dash away right ahead. As soon as we entered the estuary of the Plata, the weather was very unsettled. One dark night we were surrounded by numerous seals and penguins, which made such strange noises, that the officer on watch reported he could hear the cattle bellowing on shore. On a second night we witnessed a splendid scene of natural fireworks; the mast-head and yard-arm-ends shone with St. Elmo’s light; and the form of the vane could almost be traced, as if it had been rubbed with phosphorus. The sea was so highly luminous, that the tracks of the penguins were marked by a fiery wake, and the darkness of the sky was momentarily illuminated by the most vivid lightning.”

“April 29th.—In the morning we passed round the northern end of Mauritius, or the Isle of France. From this point of view the aspect of the island equalled the expectations raised by the many well-known descriptions of its beautiful scenery. The sloping plain of the Pamplemousses, interspersed with houses, and coloured by the large fields of sugar-cane of a bright green, composed the foreground. The brilliancy of the green was the more remarkable because it is a colour which generally is conspicuous only from a very short distance. Towards the centre of the island groups of wooded mountains rose out of this highly cultivated plain; their summits, as so commonly happens with ancient volcanic rocks, being jagged into the sharpest points. Masses of white clouds were collected around these pinnacles, as if for the sake of pleasing the stranger’s eye. The whole island, with its sloping border and central mountains, was adorned with an air of perfect elegance: the scenery, if I may use such an expression, appeared to the sight harmonious.”

← Boxing Day Bonanza How to Read a Book →