On  the 14th of December 1824, the Symbolist painter Pierre Puvis de Chavannes was born in Lyon, France. Considered a ‘painter’s painter’, he was a great influence on artists, amongst which Matisse and Picasso and universally popular in his time. “Virtually all the artists and critics of the day admired Puvis de Chavannes. His admirers hailed from the political right, left, and center, from the avant-garde, the academy, and the state.” (Jennifer L. Shaw, ‘Imagining the Motherland: Puvis de Chavannes, Modernism, and the Fantasy of France’, The Art Bulletin, Vol. 79, No. 4, Dec., 1997). De Chavannes was considered the country’s foremost public painter, producing murals that decorated museums in Amiens, Rouen, and Lyons and important buildings in Paris such as the Pantheon, the Sorbonne, and the city hall. The artist finished all his works on canvas in his studio, then they were exhibited at the Salon after which they were taken to the chosen destinations and pasted onto the walls as murals. So in many ways, there was an element of collage to these large works which were finished in situ, although the artist had a predetermined plan of what he wished them to illustrate.

There was much controversy over the meaning of these murals. “His paintings were often deemed incomprehensible. They claimed status as high art in size and subject matter, and yet they flouted the norms of academic convention. Puvis’ drawing seemed to distort, rather than idealize, his figures. His canvases were dominated by large expanses of colour that had a rough and plastery look. Correct drawing, careful modelling, distinctions between figure and ground, respect for perspective – all of these were left by the wayside in his works, be they mural or easel paintings. For some, this added up to a naive incompetence, for others, a valuable poeticism.” (Jennifer L. Shaw, ‘Imagining the Motherland’)

In Dream States. Puvis de Chavannes, Modernism, and the Fantasy of France, Yale University Press (2002), the first and, so far, only comprehensive examination of Puvis murals, Jennifer L. Shaw wrote that they these works were commissioned  to embody a vision of France. What was unusual for conservative contemporaries was presumably the fact that they did not display any effusive symbolism, as in traditional patriotic painting. An illustration of the latter can be seen in Eugene Delacroix ‘s classic piece Liberty Leading the People (1830). In this work, a woman personifying Liberty, known as Marianne, the symbol of France, leads her people over the bodies of fallen soldiers, proudly holding the tricolore flag of the French Revolution. Puvis’ murals were nothing of the sort:  instead of providing an elaborate narrative or allegory of France, the artist invited the viewers to step into the atmosphere of his dreamy vistas and dream up their own idea of national identity, of what it means to be French.

Puvis’ technical approach was rather dumbfounding: he applied large areas of flat colour to render his subjects and the space they lived in. This put the newly emerging theories of modern painting into perspective, as here critics, artists and viewers alike saw a national icon, painting in what could only be described as a figurative style, yet the appearance of his works was unsettlingly novel. Shaw pointed out that in 1890, “When Maurice Denis made his celebrated assertion, ‘before it is a battle horse, a nude woman, or an anecdote, a painting is a flat surface covered with colours arranged in a certain order,’ he had Puvis de Chavannes’ work in mind. This statement appeared in ‘Definition of neo-Traditionism,’ an essay in which Denis attempted, in terms slightly different from Michel’s, to describe the ways in which ‘modern’ painterly form might rejuvenate the tradition of French art. Denis’ dictum was followed by a parody of an audience straining to see Puvis’ easel painting Poor Fisherman (1879) as trompe l’oeil.” (Jennifer L. Shaw, ‘Imagining the Motherland’). Poor Fisherman was unique in its time: it hinted at Biblical symbolism featuring a widower and his two children in a bleak coastal landscape, but its formal synthetism, the awkardness of the drawing, Puvis’ refusal to use any modelling, shading or perspective and its peculiar greenish hue puzzled the academia, as well as the lay audience.

These were clearly the beginnings of modernist formalism, elaborated by American critic Clement Greenberg in the 20th century. Nevertheless, Puvis’ art did not fit any of the canons set by Greenberg’s definition: he did not reject historical, cultural or political inferences in his work proclaiming the supremacy of form and colour. His formalism always overlapped with dream imagery, as analysed by Shaw in murals such as Summer (Paris, Hôtel de Ville, 1891). Here there is a to and fro between a sense of the flatness of the surface through in the decorative colour and design, and a sense of perspective through the diminishing size of the figures, which is chiefly an attribute of figurative/narrative painting. 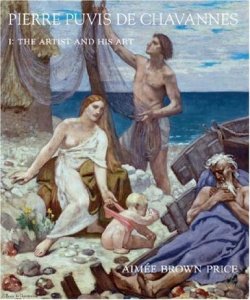 The figures in the foreground are rendered in painstaking detail while the background melts away in indistinctiveness. Areas of colour fields in Puvis’ murals preshadow Mark Rothko’s abstract works, defined by Greenberg in the 1950s as Colour Field Painting: floaty masses of colour seem to envelop a minuscule-feeling viewer in a space loaded with lyricism. There was a special magnetism about Puvis de Chavannes’s art. “Puvis’s unique pictorial mode, what the critic Alphonse Germain called his ipstisme (which we might translate as his “ipseity” or “thusness”), was responsible for the reverence that was paid to him. Germain was referring here to Puvis’s style-to its particularity, its power, and its absolute difference from anything else on offer in the 1890s.” (Jennifer L. Shaw, ‘Imagining the Motherland’).

← Wassily Kandinsky: Architect of the Future of Art Nero: Poet, Hedonist and Sadist →