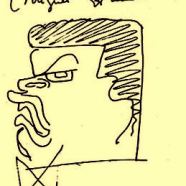 The Forgotten Caricatures of Miguel Covarrubias 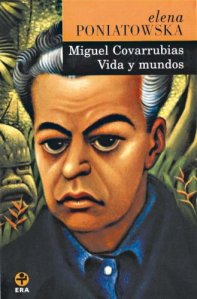 On the 22nd of November 1904, artist, art historian and anthropologist J. M. Covarrubias Duclaud (d. 1957) was born in Mexico City. Being offered a special government grant from his country at the age of 19, Covarrubias  was able to move to New York in 1924 where his talent was quickly discovered by his compatriot poet Tablada and the New York Times critic and photographer Carl Van Vechten, who introduced him to the N.Y. ‘smart set’, opening up avenues to a very successful artistic career in the media. The latter notably said that, “From the beginning I was amazed at [Covarrubias’ ability] to size up a person on a blank sheet of paper at once; there is a certain clairvoyance in this”. Many of his illustrations were celebrity, public figure or political satire caricatures for important magazines such as Vanity Fair, whose premier staff cartoonist he became within a short time, as well as the New Yorker, Fortune, Vogue and Screenland, his enlarged works often gracing their covers.

An even more interesting Covarrubias contribution has been pointed out by collector Cliff Aliperti within the Vanity Fair issues from 1932-6: The “Impossible Interviews” series were single page features with a large Covarrubias caricature of two or more incompatible famous personalities, ‘forced’ to have an imaginary encounter or conversation, amongst them: Chief Justice Hughes and  Al Capone, George Arliss and Cardinal Richelieu or the Duke of Wellington and Disreali. Beneath each of these caricature pairs the ‘interview’ text was written by Vanity Fair contributor Corey Ford. A significant collection of similar images, The Prince of Wales and Other Famous Americans, had been published in 1925, entitled after one of his famous caricatures of Prince Charles shaking hands with Hollywood actor Clark Gable: the appearance of the two men as far as their posture, clothing, expression or body language is concerned is so suggestive that a glimpse into the humorously awkward scenario can be instantly read into the subtext of the image. Most of the caricatures from this period can be seen on this blog: http://miguelcova.blogspot.co.uk/ . 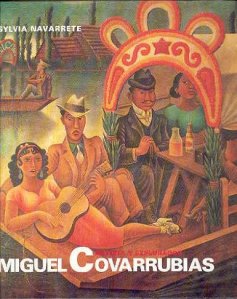 The famous Mexican muralist and close friend of Covarrubias,  Diego Rivera described his illustrations as “those caustic but implacably good-humored drawings which, fortunately for his personal safety, people have been misled into calling caricatures. In Covarrubias’ art there is no vicious cruelty, it is all irony untainted with malice; a humor that is young and clean; a precise and well defined plasticity.” In a later article about Covarrubias’ work, Adam Gopnik described the artist as “the most fashionable caricaturist of the Jazz Age, (who) employed a style whose streamlined physiognomies were openly derived from Picasso’s portraits of the teens. It is a response both mocking and affectionate, not simple hostility but something much more complicated and knowing: the tenement crowd observing, with mixed amusement and suspicion, the rise of an alrightnik [nouveau riche in Yiddish] to Park Avenue.” (‘High and Low: Caricature, Primitivism, and the Cubist Portrait’, Art Journal, Vol. 43, No. 4, The Issue of Caricature, Winter, 1983).

By likening his drawings to those of a young Picasso, it is easy to make further associations. At the beginning of the 20th century, the European cultural elite (Matisse, Picasso, Gauguin, Derain etc) were discovering African, Micronesian and Native American art, fascinated by the powerful simplicity of tribal masks and totemic iconograph. It is no surprise that Covarrubias, a versatile artist who had worked on projects as varied as stage design to book illustrations, suddenly quit his glamorous career in America to return to his roots and focus on research which was close to his heart. “His skill as a caricaturist seems somehow to have led him to an increasing fascination with a particular branch of art history: He gave up his career in New York to return to Mexico City-where he spent the rest of his life as the curator of the National Museum’s Department of Primitive Art.”(William Feaver, Masters of Caricature, 1981). 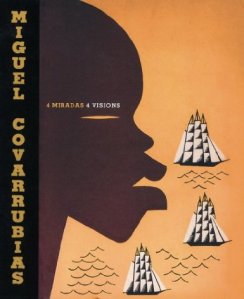 Earlier on, this inclination showed in illustrations in which he studied racial types in urban society. In time, his work evolved steadily towards an analysis of the pre-Columbian art of Mesoamerica, especially that of the Olmec culture, claiming that it predated the Classic era before archaeology even confirmed this. His views on the way in which Mexican culture was dissipated towards North America, i.e. to the Mississippian Native American Indian cultures is particularly well-documented. From 1930 to 1933, Covarrubias and his wife travelled to Asia which resulted in his best-known work Island of Bali (1937), cementing his role as a key contributor to anthropological and ethnological research. On the other hand, his caricatures have sadly been filed along with the old issues of the N.Y. magazines. These are, however, significant works which deserve further attention.

← Voltaire: The Father of Sci-Fi? Who is the Doctor? A Question of Identity in Doctor Who →