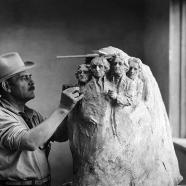 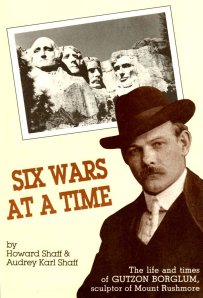 On the 4th of October 1927, Gutzon Borglum (1867-1941) began sculpting Mount Rushmore, a long project which ended unfinished in 1941, the year of the artist’s death. Borglum was a Danish-American  sculptor, son of a bigamist Mormon father who started off as a woodcarver, then moved with Gutzon’s aunt to New York to train as a doctor. Borglum’s education progressed remarkably well and he ultimately had the fortune to train in Paris at the Académie Julian. There, he came to know Auguste Rodin and was clearly inspired by the post- impressionist focus on light-reflecting clear-cut surfaces and a return to classical forms of beauty, which reflected inherent traits of the subjects’ characters. In 1906, Borglum famously had a group sculpture accepted by the MOMA, the first ever purchased from a living American artist.

Although having started as a painter, Gutzon seems to have steered towards sculpture as a way to rival the career of his sculptor brother Solon. After more or less monumental commissions and rubbing shoulders with several empowered statesmen and financiers, Borglum became famous for creating an enormous composition of presidents’ heads (Washington, Lincoln, Roosevelt, Jefferson) at Mount Rushmore in South Dakota in an area called Black Hills. This land was said to have been seized from the native Indians in 1877 following the discovery of gold there. His first attempt with one of the faces was blown up after two years. Dynamite was also used to remove large areas of rock from under Washington’s brow; actually 90% of the carving was carried out with dynamite.

Between tiring spells supervising the site, Borglum travelled the world, raising money, perfecting his personal reputation.  The scale at which he ended up working had a lot in common with his personality. He had abandoned his previous project at Stone Mountain, Georgia, due to the fact that the latter had merely regional support, whist Mt Rushmore had a potential to acquire national backing and significance. Whilst at Stone Mountain, he became associated with the Ku Klux Klan, who funded the white nationalist monument. It is believed that his interests were mainly mercantile, although the personalities in Mt Rushmore do coincidentally reflect the artist’s own image – a gathering of prominent white men, rather than the Native Americans who held the Black Hills sacred. The implications of Borglum leaving his mark on their ancient land and helping it become a gigantic national memorial for a New America and a commercial tourist site is a controversy in itself.

He was a megalomaniac, who wrote in his diary “I must see, think, feel and draw in Thor’s dimension.” He was said to have an unpleasant, arrogant nature and often disagreed with sponsors and organisers; the buffer between them was his son Lincoln who worked on the rock face itself along with the hired help. Borglum was a volatile perfectionist who fired good workmen, only to be rehired later by his son. The latter oversaw work at Mt Rushmore in his father’s absence and upon Borglum’s death in Chicago, he did a short stint on the sculpture which nevertheless remains in the original state projected by his father.