On the 28th of November 1904, photographer Gjon Mili was born in  Korçë, Albania. He came to the United States in 1923 at the age of 19 to study electrical engineering at the Massachusetts Institute of Technology where he met Prof. Harold Edgerton, who worked on developing electronic flash. In 1939, Mili landed a job as a freelance photographer for Life magazine where he was to work for 45 years until his death. He became famous as a lighting innovator and specialist in motion photography capturing pictures from dance shows, music gigs, sports performances and theatre but he also produced close-ups and covers for the magazine featuring powerful portraits of public and news figures he travelled worldwide to shoot, eg. Adolf Eichmann, Eisenhower, Pablo Casals etc. Mili recalled: “After graduating I took many photographs as an amateur while doing research in lighting to earn a living. It was 10 years before I was able to profit materially from my photographic efforts. With the advent of high speed electronic flash units, I turned professional. My generation came at a time when photography was advancing by leaps and bounds, creating the impulse to experiment and to seek new approaches.” (from Gjon Mili obituary by William R. Greer, Published: February 16, 1984 in The New York Times). Mili was one of the first to use electronic flash and stroboscopic light to create photographs that added a creative edge to their scientific purpose. Working with Edgerton, they used stroboscopic instruments which made a cyclically moving object appear to be slow-moving, or stationary in order to capture a sequence of actions in one photograph. 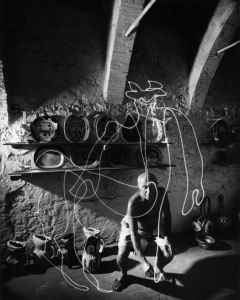 “It was with a series of flashes, called stroboscopic photography, that he created his version of the Duchamp’s painting ”Nude Descending a Staircase.” He made similar stroboscopic photographs of a pitcher letting fly a knuckle ball and of a ballet dancer in motion. (Gjon Mili obituary by William R. Greer, Published: February 16, 1984 in The New York Times). Mili’s association with famous artists continued as he became Edward Weston’s assistant in the mid-1940s. However, his best known collaboration happened when Mili visited Pablo Picasso in Vallauris, South of France, in 1949. He showed Picasso some of his photographs of ice skaters with tiny lights affixed to their skates, jumping in the dark, and the master was inspired. “Picasso gave Mili 15 minutes to try one experiment. He was so fascinated by the result that he posed for five sessions, projecting 30 drawings of centaurs, bulls, Greek profiles and his signature. Mili took his photographs in a darkened room, using two cameras, one for side view, another for front view. By leaving the shutters open, he caught the light streaks swirling through space.” (Pablo Picasso Draws With Light: The Story Behind an Iconic Photo | LIFE.com). So, Mili opened his lens in a dark room to reveal the now iconic images which Picasso had drawn using the flashlight as charcoal or brush. In this environment, the film would firstly show the lines produced by the flashlight. Once the light drawing was finished, Mili would trigger the strobes and close the lens, preserving both the light drawing and the artist behind the luminous design.

The origins of light painting photography go back to 1914 when Frank Gilbreth and his wife, pioneers of motion study, used small lights and the open shutter of a camera to track the motion of workers. They were advocates of scientific management studying the work habits of manufacturing and clerical employees in various industries to find ways of increasing output and simplifying  their jobs. Man Ray as well as Barbara Morgan used their discoveries, but Gjon Mili helped the century’s most creative minds make light painting memorable in art history.

← Bruce Lee: The philosopher and poet Thomas A. Edison: Invention as a Cognitive Process →