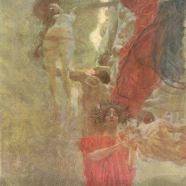 On the 14th of July 1862, Symbolist painter Gustav Klimt was born in Baumgarten, the Austrian Empire. In 1894, Klimt and his partner, Franz Matsch were commissioned by the Austrian Ministry of Culture and Education to create three paintings for the University of Vienna. The canvases were to be installed on the ceiling of the Graduation Hall in the new University designed by Heinrich Ferstel. Not completed until the turn of the century, they represented Klimt’s last public commission. Entitled  Philosophy, Medicine, and Jurisprudence, the murals were criticized for their radical themes and material, and were called “pornographic” by his contemporaries. This was due to the fact that Klimt used traditional allegory as a new form  of expression which seemed more sexual and offensive to some. The public outcry came from all quarters—political, aesthetic and religious. As a result, they were not displayed on the ceiling of the Great Hall, and all three ended up being destroyed by retreating SS forces in May 1945.

“Stipulations of the contractual agreement enumerated the essential requirements for the program and design of the ceiling: it should include a large central canvas allegorizing the Enlightenment theme of the Triumph of Light over Darkness while four encompassing pictures would personify the Faculties of the University: Philosophy, Medicine, Jurisprudence, and Theology. Altogether it was a conservative historicist program. The Academic Senate of the University (…) anticipated a group of Faculty Pictures of monumental scale, based on a Baroque design.” (Tina Marlowe-Storkovich, “Medicine” by Gustav KlimtAuthor, Artibus et Historiae, Vol. 24, No. 47, 2003). 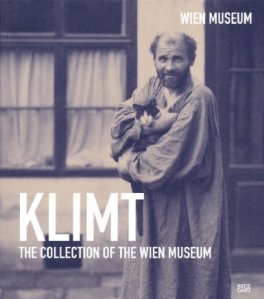 Of the available possibilities, Klimt chose to allegorize the secular Faculties of Philosophy, Medicine, and Jurisprudence and from 1899-1907 he executed paintings based on those themes. Medicine was the second painting, presented in March 1901 at the tenth Secession Exhibition. It featured a column of nude figures on the right hand side of the painting, representing the river of life. Beside it was a young nude female who floated in space, with a newborn infant at her feet, representing life. A skeleton represented death in the river of life. The only link between the floating woman and the river of bodies is two arms, the woman’s and a man’s as seen from behind. At the bottom of the painting Hygieia stood with the Aesculapian snake around her arm and the cup of Lethe in her hand, turning her back to mankind. “Medicine is testimony of a man’s struggle to break away from parturition and death – the suffering in life, the finality of death, and the unwillingness to accept the idea that every birth is merely a death sentence. The reaction of the Faculty in the School of Medicine to Klimt’s image was no less than hysterical, for these professors were engaged in a positivist search for truth and Klimt demonstrated in this image that science was no panacea for human suffering.” (Tina Marlowe-Storkovich)

At this stage in his career Klimt, like several Art Nouveau and Impressionist artists of his time, was exposed to and influenced by Japanese wood block prints or ukiyo-e. “The amazing patterns that characterize Hygieia’s mantle-patterns that break down the corporeality of the human figure-bear an affinity with the treatment of garments in Japanese prints.

The kimonos in Hideyoshi and his Five Wives viewing Cherry Blossoms by Utamaro are examples. Klimt’s contemporaries in France, including Bonnard and Vuillard, had also imbibed into their images this feature from Japanese prints. This may be seen in Vuillard’s Dressmaking Studio,c . 1892, both images dating from 1892. As with Utamaro, Bonnard, and Vuillard, so too with Klimt: patterned garments dematerialize the human figure and, if extended to the background, pattern flattens out the entire picture plane. It is worth noting that in 1903 the Secessionists staged an exhibition – The Development of Impressionism in Painting and Sculpture – in which the prints of Utamaro and Hokusai were shown with French Impressionist paintings and sculptures, including images by Vuillard and Bonnard.” (Tina Marlowe-Storkovich).