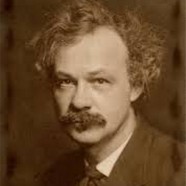 Jerome Myers: Painter of the Underdog

On the 19th of June 1940, American painter Jerome Myers died in New York. “For more than 50 years Myers, small of stature and bearing a striking resemblance to Paderewski, was a familiar sight on the streets of New York, which he made his special painting province.” His obituary in The Art Digest, read that, “The Lower East Side, with its crowded tenements and struggling immigrants, knew him best and was recorded in hundreds of sketches which were later transcribed onto soft-toned canvases. The poor seemed to bring forth Myers’ deepest feelings, but he did not paint them because they and their environment were ugly; he saw the beauty of their humble lives, and on his canvases he has caught that beauty…During those 50 years the cobblestones that Myers used to tramp were smoothed to asphalt pavements, the city’s center of activity crept northward leaving in its wake new, pristine skyscrapers; gas lamps gave way to neon, but the poor remained.” (The Art Digest, 1 July 1940)

Jerome Myers was among the first American painters who consciously abandoned the doctrines of academic art in favour of a style and themes that were closer to his personal sensibilities. Born in Petersburg, Virginia, in 1867, he grew up in poverty. This perhaps explains his affinity to the unpretentious lives of the urban poor. Practically abandoned by his father, Myers travelled around the country with the rest of his family to finally arrive and settle down in New York in 1886, at the age of nineteen. A year later he began his formal education taking up an evening course at Cooper Union and working at the same time as a painter of signs and interior scenes during day time. His first painting, Backyard (1888), was formative in terms of his artistic vision that would define his future career. “I went to the

gutter for my subject,” he admitted, “but they were poetic gutters.” (Jerome Myers, Artist in Manhattan). After one year at Cooper Union, Myers entered the Art Students League. There he studied under George de Forest Brush, a competent academician who opposed any forms of artistic experimentation. Whilst the school provided him with thorough technical
training, in time it became clear to Myers that academicism was way too restrictive for him. “If ever I was to create beauty I knew that it would not be by imitating the classical Greeks or Michael Angelo but by expressing what was in me, as they had expressed themselves.” (Wesley W. Stout, “Making the Grade,” New York Globe, September 28, 1922). Myers would often miss the classes and go around town sketching and painting various urban scenes instead. In 1895, Myers started working for the New York Tribune. Within a year he earned enough to travel to Paris in order to experience firsthand “the reputedly wonderful Mecca of art for students of the whole world” (Myers). Despite a great and fruitful time in Paris, which he spent visiting galleries and meeting interesting artists, he eventually came back to New York and refocused on his favourite subject: the life of the underdog.

“Although Myers painted many scenes of the marketplace throughout his career, he, like most of the city painters of the time, recorded the more leisurely moments of urban life. The innumerable city piers were often places of refuge, especially during the hot summer evenings. …Here, the children watch passing boats and play while their parents discuss various issues of the day or merely escape the turmoil of the city in quiet slumber. The glowing, muted colors and the emphasis on the horizontal planes of the canvases reaffirm the themes of tranquillity and silence. The palette, as well as the subject matter, indicates Myers’ interest in the work of Rembrandt, the one great master upon whom Myers relied for artistic and spiritual guidance. .. Myers stated, “It may be that Rembrandt’s Dutch courage has sustained me, even as his art has inspired. On faith and as an atavistic liberty, I have adopted him as an exemplar.” Rembrandt’s depictions of the Jewish ghettos of Amsterdam and his sympathetic portraits of old people were powerful stimuli for Jerome Myers who also painted the ghetto life of a major city and sought to capture the spirit and character of old age in his work. …In addition to thematic similarities, both artists painted with a palette limited to a few colors and almost always in low-keyed tones. A master of chiaroscuro, Rembrandt was able to create shadowy, suggestive depths of space in his tonal masterpieces. Myers often utilized a subdued palette in his early paintings; many of his figures are placed in a predominantly golden atmosphere and background forms merge with, and sometimes are lost in, the surrounding space. Certainly the evocative potential of shadow was mastered by both artists.” (Grant Holcomb, The Forgotten Legacy of Jerome Myers, (1867-1940): Painter of New York’s Lower East Side)