People say, live fast, die young. As vague as this may sound, by looking at the life of one of the greatest, if not the greatest, composers of all time, there seems to be some degree of relevance in it. On the 27th of January 1756, Wolfgang Amadeus Mozart was born in Salzburg, Austria. The utterly brilliant child prodigy turned utterly brilliant composer, who stunned 18th century audiences, including European royalty, was given to live a mere thirty-five years. Yet, during his short life he composed over 600 works.

Such a massive body of work implies the need of an early start in Mozart’s composing career. And indeed, his talent was spotted and ignited at a very early age by his father, Leopold Mozart. “Mozart the son was about three years old when his seven-year-old sister began to receive clavier lessons from her father. Already at this time the boy showed his extraordinary talent. He entertained himself often for long periods at the keyboard by hunting out the thirds, which he then always sounded, and showed his pleasure at having discovered this harmony… In his fourth year, his father began to teach him some minuets and other pieces, on the clavier… For a minuet he needed half an hour, and for a longer piece an hour, to learn it and then play it perfectly, cleanly, and with the steadiest rhythm.” (Alfred Einstein, Mozart, His Character, His Work)

Mozart wrote his first symphony at the age of eight, followed by forty more in just two decades. This early start in his professional career had probably some impact on his later development, as many of his contemporaries would refer to the composer as “immature and detached from reality”. “A number of Leopold’s letters contain severe judgements of what he perceived as his son’s immaturity. In his letter to his wife and son of 16 February 1778, he complains to Wolfgang that, whereas “as a child and a boy you were serious rather than childish,” now that he was an adult he was “hot-tempered and impulsive.”” (Piero Melograni, Wolfgang Amadeus Mozart: A Biography). Whether his light-hearted demeanour was the ‘product’ of a missed childhood or simply innate genius is hard to answer. But probably thanks to this particular trait of Mozart’s character, his music – an undeniable mixture of mature complexity and ‘childish’ playfulness – has attracted the attention of not only his fans but also psychologists, some of them claiming that Mozart’s music can significantly influence the working of the brain.

In 1991, a French researcher, Dr Alfred A. Tomatis, came up with the concept of the “Mozart effect”. In his book Pourquoi Mozart? (Why Mozart?) he wrote about his presumption that listening to Mozart at different frequencies helped the ear, and promoted healing and development of the brain. His idea was later picked up by Raucher, Shaw and Ky (1993), who investigated the effect of listening to Mozart on spatial reasoning. They conducted their experiments by exposing the research participants to three different listening conditions: a piece of Mozart’s music, verbal relaxation instructions and silence; then they asked them to do a test of abstract reasoning. The results of the test showed a temporary enhancement effect of spatial reasoning. However, the test was unable to answer whether a prolonged exposure to Mozart’s music could increase IQ in general. In a research report Arousal, Mood, And the Mozart Effect, William Forde Thompson, E. Glenn Schellenberg, and Gabriela Husain claimed that “the Mozart effect is an artefact of arousal and mood”: “If the Mozart effect is a consequence of arousal or mood, then similar increases in performance on spatial tasks should be observed following exposure to pleasant and engaging stimuli other than music. Nantais and Schellenberg (1999, Experiment 2) tested this hypothesis by asking participants to complete a spatial task after listening to music by Mozart or a narrated story by Stephen King. They also indicated which listening experience (music or story) they preferred. This alteration to the control condition (i.e., listening to a narrated story instead of sitting in silence) eliminated the Mozart effect. Moreover, a significant interaction between condition and preference revealed that individuals who preferred the Mozart music had improved spatial performance following the music, whereas those who preferred the story improved after the story.” (Psychological Science, Vol. 12, No. 3, May, 2001) 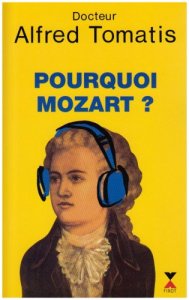 However, as much as scientists may disagree on the effect of Mozart’s music on human IQ, Anton Stucki, a chief operator of the sewage centre in Treuenbrietzen in Germany, has proved that it is possible to stimulate the activity of microbes breaking down waste by playing some of the most exquisite of Mozart’s tunes to ‘them’. “We think the secret is in the vibrations of the music, which penetrate everything – including the water, the sewage and the cells. It creates a certain resonance that stimulates the microbes and helps them to work better. We’re still in the test phase, but I’ve already noticed that the sewage breakdown is more efficient, “ he said. (Kate Connolly, Sewage plant plays Mozart to stimulate microbes, The Guardian, 2 June 2010). Thanks to the microbes’ good taste in music the  plant was expecting to save as much as €1,000 per month.

← Theatre and Morality: Synge’s Playboy of the Western World A Tale of Serendipity →