On the 21st of December 1937, the first full-length cel-animated feature film by Walt Disney Productions, Snow White and the Seven Dwarfs, premiered at the Carthay Circle Theatre in Los Angeles, California. The film, based on the German fairytale by the Brothers Grimm, was a great international success, earning $8 million following its initial release.

The premiere of the film was crowned with favourable reviews. For example, The Times claimed that, “The first and outstanding virtue of this film is that it plays no tricks with the story. It is an entertainment for men and children which is without equal, as entertainment, in the history of films.” (The Times, 19 September 1938; in: John Hanson Saunders, The Evolution of Snow White: A Close Textual Analysis of Three Versions of the Snow White Fairy Tale). Whilst the latter statement is undeniably true, as Snow White attracted audiences of all ages, the assertion that the film was a faithful revision of the original Brothers Grimm version was not true at all. According to Vigen Guroian, “…Disney has turned this popular fairy tale into a story about romantic love.” (Vigen Guroian, Tending the Heart of Virtue: How Classic Stories Awaken a Child’s Moral Immagination; in: Saunders). Furthermore, Wilkie-Stibbs pointed out that the film was to a certain extent a representation of American values at the time: “Disney adaptations of fairy tales are particularly interesting to an intertextuality of children’s literature because, as touchstones of popular culture, they reflect the way in which each generation’s retellings have assumed and fore grounded the dominant socio-linguistic and cultural codes and values at a particular moment in history: for example, Disney’s foregrounding of Snow White’s good looks alongside qualities of moral rectitude and goodness claimed for her by earlier written stories.” (Christine Wilkie-Stibbs, “Intertextuality and the Child,” in Peter Hunt, Understanding Children’s Literature; in: Saunders). 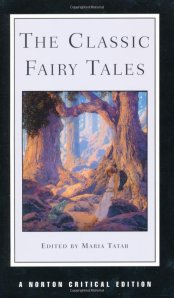 Also, Maria Tatar ascribed certain particularities to Disney’s film. She claims that, “The Disney version of ‘Snow White’ relentlessly polarizes the notion of the feminine to produce a murderously jealous and forbidding cold woman on the one hand and an innocently sweet girl accomplished in the art of good housekeeping on the other. “ (Maria Tatar, The Classic Fairy Tales). This argument has been also used by Sandra Gilbert and Susan Gubar (The Madwoman in the Attic) to support their feminist interpretation of the original Grimm version of the tale. “Having observed that “myths and fairy tales often state and enforce culture’s sentences with greater accuracy than more sophisticated texts,” Gilbert and Gubar choose to analyze “Little Snow White” as their primary example of a story which “dramatizes the essential but equivocal relationship between the angel-woman and the monster-woman”, those two extreme mythic masks which women (writers and readers) see when glancing into “the mirror of the male-inscribed… text.”… Gilbert and Gubar argue… that the metaphor of literary paternity is built into the very word “author”: “In patriarchal Western culture, therefore, the author’s text is a father, a progenitor, a procreator, an aesthetic patriarch whose pen is an instrument of generative power like his penis.”” (Cristina Bacchilega, Cracking the Mirror Three Re-Visions of “Snow White”, boundary 2, Vol. 15, no. 3 – Vol. 16, no. 1, Spring – Autumn, 1988). 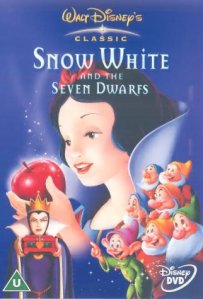 Following Gilbert and Gubar’s logic, it is justified to think of Disney as an “aesthetic patriarch” too. One can even say that his revision of the famous tale is more “patriarchal” than the original Grimm version, as entwined in the cultural contexts of the 1930s and supported by suggestive imagery, it acquires attributes of manipulative visual propaganda. The message in the film is quite straight forward: the bad girls are vain creatures glued to their mirrors, whilst good girls sit in their kitchens, talk to the birds and cook dinner for their multiple Dwarfs. Although, on the other hand, isn’t it a bit too biased to claim that Disney’s Snow White is an example of premeditated male chauvinism? After all, there are many revisions of various literary works which adopt the social values of the times they are created in. And so, modern revisions of the popular tale of Snow White are analogically different from that of Disney’s and highlight contemporary social attitudes. For example, Robert Coover’s  The Dead Queen (Robert Coover, A Child Again) or Diana Goldstein’s photographic project Fallen Princesses investigate the story beyond the boundary of the “happily ever after”, reflecting a common modern scepticism towards “happy endings”.