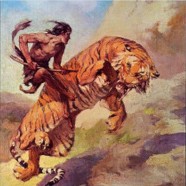 Posted by ArtLark on October 1, 2021 in Art, Literature, Painting | 2 Comments

On the 1st of October 1872, James Allen St. John, often referred to as ‘the godfather of modern fantasy art’, was born in Chicago, Illinois. His work set the spirit and rhythm for the important science fiction sub-genre of heroic fantasy illustration. St. John studied in Paris, Belgium and Holland and worked for most of his career in Chicago. Among his most active clients was the A. C. McClurg Company for which he illustrated many of the fantastic adventure novels of Edgar Rice Burroughs.

The collaboration between Burroughs and St. John began in 1916 with illustrations to The Beasts of Tarzan

. From then on Burroughs regarded St. John as the definite Tarzan artist for he was able to convey violent yet graceful, almost balletic movements in a manner that even today seems very fresh and dynamic. His illustration for the cover of Tarzan And The Jewels of Opar

depicts a scene that one could almost immediately place within Michelangelo’s The Last Judgement’s figures. Similar kind of romantic heroism characterises the illustration to The Jungle Tales of Tarzan 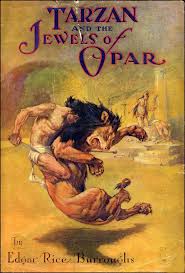 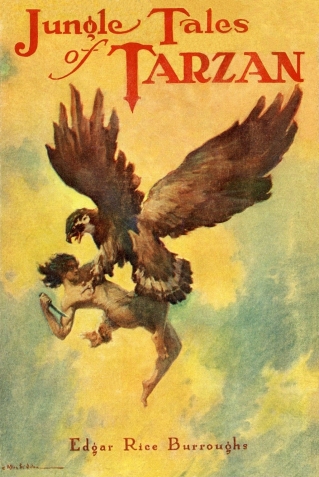 St. John’s unique style skilfully merged elements of Classicism, Romanticism, Mannerism and those from the edge of fantasy kitsch. His works have become an inspiration to many readers of Burroughs’ stories but also to generations of pulp fiction lovers. The term ‘pulp’ was derived from the kind of cheap wood pulp paper on which the late 19th century and the first half of the 20th century fiction magazines were normally printed. Their cover illustrations were initially targeted for specific marketing purposes, but eventually gained recognition for their unique artistic values. St. John did cover illustrations for various pulp magazines, among others – ‘Amazing Stories’, ‘Fantastic Adventures’, ‘Fate’, ‘Other Worlds’, ‘Mystic Magazine 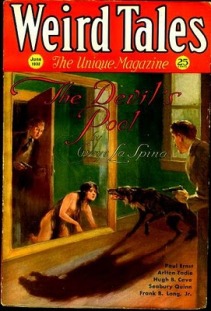 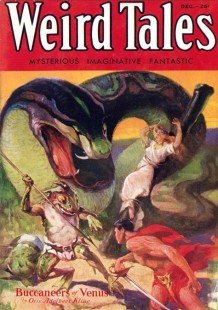 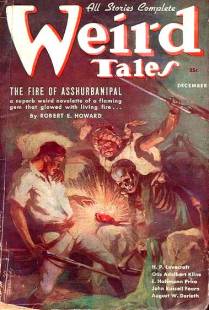 See also a flick-through edition of ‘Weird Tales’ from October 1936:

St. John’s other domain was portraiture. The influence came from his mother, who was a painter and a portraitist too. He perceived portraiture as a unique chance to tell a much in-depth story about a depicted person: “Portrait painting” he claimed, “appeals to me as one of the highest branches of the painter’s craft. So commonplace when stiffly and uninterestingly treated, but, on the other hand, presenting infinite possibilities when the idea of making it a work of art holds equal place with that of truthfully rendering the features. For instance, one should look at a portrait as something not merely a likeness or photographic copy of the face alone, but a thing that is the sitter himself, his personality, to the tips of his fingers, the wrinkle of his clothes; and the artist should draw all these in so broad and sympathetic a way that those who do not know the person may yet find pleasure in the counterfeit, the lighting and the harmony of colours. I have painted many portraits of widely different types, striving always for these points, and today I am completely fascinated by the exquisite pleasure of studying human nature and transferring it to canvas.”

In 1917 St. John began to teach Painting and Illustration classes at the Art Institute of Chicago, which he continued to do for the rest of his life. In 1928 he also taught a painting class at the Businessmen’s Art Association in Chicago, which was a private club for professional artists that worked for newspapers and advertising. Below – a very rare, if not the only footage of an art class during which James Allen St. John is demonstrating his unique painting techniques: