Home » Art » Body-Consciousness in the Art of Maria Lassnig

Body-Consciousness in the Art of Maria Lassnig

On the 8th of September 1919, artist Maria Lassnig was born in Kappel am Krappfeld, Carinthia, Austria and died in May 2014 aged 94. She is remembered for her daring self-portraits and her theories of ‘body sensation’ and ‘body awareness’ which she explored in her painting. Seeing the innovations of expressionism and surrealism in her youth left a lasting mark on the artist, especially meeting André Breton, and Yves Klein in 1950s Paris; she consequently developed a very personal signature style of anthropomorphic painting. By the 1960s, Lassnig moved further away from abstraction and began to focus more wholly on the human body and psyche. Later, however, as she settled in New York in the 1970s, she found that she had to experiment with new media such as video, as no one took her ‘deformed’ paintings seriously, in a period in which figurative art was seen as outdated.

Undeterred by artistic trends, Lassnig continued to pursue her quest of representing the naked body with startling honesty. As early as 1948, she had referred to this theme in her art as ‘body consciousness’ – it allowed the artist to depict the parts of her body that she could actually feel as she worked. She painted herself painting herself – as such, many of her self-portraits depict figures that are missing body parts or use unconventional colours. She was fascinated by exploring the sensations one has of one’s own body, as felt from within, rather than from observation or through anatomy and preconceived ideas of body image. These works “transformed figures into expressions of the artist’s physical sensations: “the only true reality is my feelings, played out within the confines of my body”. The type of distortion varies greatly: limbs are elongated, or truncated; noses turned into pigs’ snouts; mouths pulled into shocking grimaces. On other occasions Lassnig’s own strong features are recognisable, as she stares at us, while brandishing a pair of revolvers, or gapes blindfolded, with a cooking pot on her head.” (Christopher Masters, ‘Maria Lassnig Obituary’, The Guardian, Wednesday 7 May 2014). 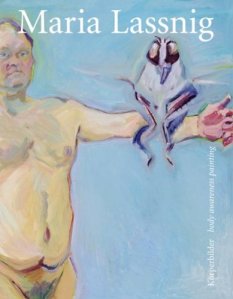 Her first solo exhibition in Britain was held at the Serpentine Gallery in London in April 2008. In the catalogue, Jennifer Higgie noted in Lassnig’s art a struggle between two worlds: “the surface (of the skin, of the painting, of paint), and the inner world (of the painter, of the person looking at the painting). The artist is at once herself, the body she inhabits, and the subject of her own creativity.” (Jennifer Higgie, ‘Too Few words,’ exh. cat., Serpentine Gallery, Koenig Books, London, 2008). Karen Lang, the author of Chaos and Cosmos: On the Image in Aesthetics and Art History (Cornell University Press, 2006) tried to decode the motivations behind  Lassnig’s self-portraits, claiming that they “also negotiate the separation between sensation and awareness inside the self, that fissure between feeling and articulation papered over by consciousness. Lassnig has in fact coined the terms Körpergefühl (body sensation) and Körperbewusstsein (body awareness) to describe her art. The use of these two terms reveals the rub: to sense and to be aware of sensation are two separate things nonetheless bound together. Her art is either body sensation or body awareness, and it is both at once.” (Karen Lang, ‘Maria Lassnig’s Body Sensation, Body Awareness’, Winter 2009, Volume 12, No 2, X-TRA Contemporary Art Quarterly, Los Angeles).

Charles Darwent wrote about one of the most striking works in the Serpentine show entitled You or Me (see the feature image to this article): “Lassnig’s apparently shaved pubic cleft marks the picture’s vertical axis, the line passing up between her breasts and eyes. This cleft is also one of three orifices dotted about the picture’s composition, the other two being the artist’s gaping mouth and the hole in the barrel of a gun. The last is pointed right at us, although Lassnig is pointing another gun, held in her left hand, at her own head. The piece is called Du oder Ich (You or Me), which suggests a relationship between viewer and viewed untypical of self-portraiture as a whole. Or is it? The most obvious way of reading Du oder Ich is via the good Doctor Freud, the artist’s guns being phallic compliments to her female genitals. They may be

killing her, but they may equally well kill us; the hole in the gun echoes Lassnig’s vagina, possibly the scariest passage in the work and certainly its most embarrassing. Lassnig painted this picture when she was 86. Old ladies’ pubes are not an allowable subject for portraiture, especially when painted by the old ladies themselves. In choosing to render herself powerless and vulnerable – naked, suicidal – Lassnig is taking on a power we do not want her to have.” (Charles Darwent, exhibition review of Maria Lassnig at the Serpentine Gallery, London, ‘All things considered, I take it you’re a little upset’, The Independent, Sunday 27 April 2008). Lassnig’s contradictory and confrontational works have been interpreted in various ways and she remains one of the best kept secrets of European modern art. It is perhaps time to see past Francis Bacon and his carefully studied backgrounds and photo potrait studies and attempt the much more challenging task of plunging the depths of Maria Lassnig’s inner world.