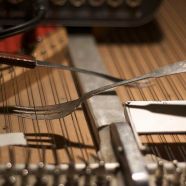 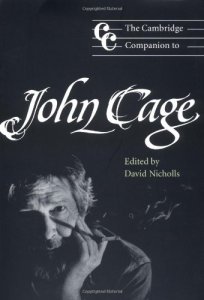 On the 5th of September 1912, American composer, theorist, writer, and the pioneer of indeterminacy in music John Cage was born in Los Angeles, California. After having studied piano in LA and Paris, he came under the influence of such musical innovators as Richard Buhling, Henry Cowell, Adolph Weiss, and Arnold Schönberg. By the late 1930s, Cage had established himself as a leader of the music world’s avant-garde movement, a position he solidified over the next five decades, expanding the influence of his ideas into art and dance. His fascination with rhythms and percussion instruments greatly influenced his early work, as did the music of Asia, especially India. His first work for “prepared piano,” a polytimbral instrument he developed, premiered in 1938, and he later became known as a pioneer of aleatoric composition techniques (indeterminate music) and for his free-form improvisatory performance pieces.

Cage’s idea of indeterminacy in music was born after reading the I Ching, also known as the Book of Changes, a Chinese classic text describing a symbol system used to identify order in chance events. Applied in music, the technique enabled Cage to explore “the activity of sound” rather than its general feeling. In a 1991 interview with Miroslav Sebestik (Listen, documentary by Miroslav Sebestik. ARTE France Développement, 2003) Cage described this as follows: “When I hear what we call music, it seems to me that someone is talking. And talking about his feelings, or about his ideas of relationships. But when I hear traffic, the sound of traffic—here on Sixth Avenue, for instance—I don’t have the feeling that anyone is talking. I have the feeling that sound is acting. And I love the activity of sound […] I don’t need sound to talk to me.” 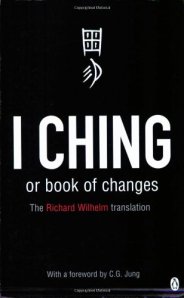 Generally speaking, “Indeterminate music is characterized by the use of random outputs, either during the compositional process or during its performance. … Indeterminate music, which has risen prominently during the second half of the 20th century mainly due to the works of John Cage, relies on aleatoric choice over the sensible parameters of sound, such as pitch, duration, rhythm, order, and so on. Aleatoric choice can be introduced by the composer while writing the piece: in that case, a fixed score is produced from random outcomes. John Cage’s Music of Changes is an example of such a score: random outcomes from the Yi-King [I Ching] were used to determine piano notes and the performer has no choice but to follow the final score. On the other hand, aleatoric choice can be introduced by the performer following instructions from the composer: the music is thus said to be indeterminate in its realization. Morton Feldman’s Projections series, for example, relies on the performer to choose the pitch of the notes according to a particular grid-like framework. Another example is Stockhausen’s KIavierstück XI in which the performer can choose the order of fixed sequences.” (Alexandre Popoff, Mathematics and Computation in Music: Third International Conference, MCM 2011)

Music of Changes, composed in 1951, is Cage’s earliest fully indeterminate instrumental work. “Music of Changes was a monumentally difficult work written using extensive chance operations. Highly regarded by the European avant-garde, at least by reputation, it was seen as a part of the compositional ideology they had been in the process of rebuilding after the war. A short excerpt from a letter by Pierre Boulez, written in December 1951 in response to a letter from Cage describing the composition of Music of Changes, con-firms this view: “Everything you say about the tables of sounds, durations, amplitudes, used in your Music of Changes is, as you will see, along exactly the same lines as I am working at the moment.”” (David Nicholls, The Cambridge Companion to John Cage) 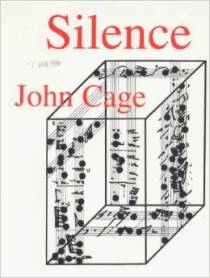 The impact of Cage’s new compositional method is also visible in his written and spoken language, mainly in his early 1950s essays and lectures. They represent a radical stylistic departure from his earlier writings, a departure that mirrored Cage’s simultaneous adoption of chance operations as the basis of his compositional technique, as manifested in, for example, Music of Changes. Below is a fragment of one of Cage’s 1958 lectures, constructed in this particular manner. Cage stated: “I decided to make a lecture within the time length of the Music of Changes (each line of the text whenever speech or silence requiring one second for its performance), so that whenever I would stop speaking, the corresponding part of the Music of Changes itself would be played. The music is not superimposed on the speech but is heard only in the interruptions of the speech – which, like the lengths of the paragraphs themselves, were the result of chance operations.” (John Cage, Silence: Lectures and Writings) 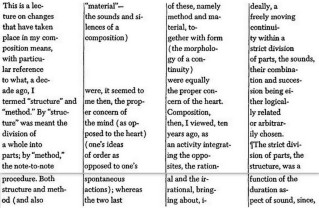