Home » Art » Peggy Guggenheim: The Woman Behind the Art 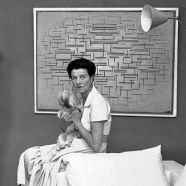 Peggy Guggenheim: The Woman Behind the Art

On the 26th of August 1898, American matron and collector of the arts Peggy Guggenheim was born in New York. “Peggy Guggenheim was one of ten children-the second of three daughters-born to Benjamin Guggenheim and Florette Seligman, both second-generation members of German-Jewish families that had built their wealth in America. Two of her uncles, Solomon and Simon, established the foundations supporting the famous museum and grant organizations, while Benjamin dabbled in largely unsuccessful businesses and took numerous mistresses in Europe. He was both a victim and hero of the Titanic’s fatal maiden voyage (the French singer traveling with him survived). Florette Guggenheim, already estranged from her husband and by all accounts a rather odd personality, placed her children in the care of governesses. A painting by Franz von Lenbach (c. 1903) of Peggy leaning against her older sister Benita shows poignantly their mutual dependency. Brought up in the trappings of wealth, the girls inherited $450,000 each from their father’s tangled finances. Peggy managed her money well and used it productively throughout her life. Although Peggy Guggenheim read voraciously and traveled widely, she gained her knowledge of art mostly from her husbands, lovers, and friends.(.. .) After six years of marriage she left her first  husband Laurence Vail for an English writer, John Holms, whose death from routine surgery in 1933 devastated Guggenheim. She had a brief marriage to Max Ernst a few years later and affairs with, among others, Samuel Beckett and Yves Tanguy, all of whom contributed to her unconventional education.” (Virginia Pitts Rembert, review of Peggy Guggenheim: A Celebration by Karole P. B. Vail and Thomas M. Messer, in Woman’s Art Journal,Vol. 21, No. 1, Spring – Summer, 2000).

She is chiefly known as the patron of the Abstract Expressionist school of artists in New York City. ‘The Mistress of modern art’, Peggy amassed one of the most important collections of early 20th century European and American art embracing cubism, surrealism and expressionism. Guggenheim was magnetically drawn to the avant-garde artistic community of Paris. She bought works by, and befriended, such artists as Picasso, Duchamp, Man Ray and Dali. In 1938 she opened her first gallery of modern art in London, followed by the ‘Art of this Century’ gallery in New York. “Guggenheim threw herself into collecting with enthusiasm. 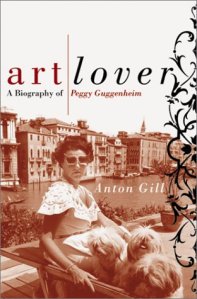 Aided by the uncertainty of war, which had depressed artists’ sales, she bought quite cheaply; her motto soon became “buy a picture a day.” Among her purchases in Paris were works by Brancusi (including Bird in Space), Salvador Dali, Alberto Giacometti, Giacomo Balla, Georges Braque, Georgio de Chirico, Robert Delaunay, Theo van Doesburg, Duchamp-Villon, Ernst, Albert Gleizes, Paul Klee, Fernand Leger, El Lissitzky, Magritte, Man Ray, Louis Marcoussis, Joan Miro, Piet Mondrian, Pevsner, Francis Picabia, Paul Delvaux, Schwitters, Gino Severini, Georges Vantongerloo, Jacques Villon, and Arp. (Pablo Picasso, who mistook her for a housewife with a shopping list, shooed her out of his studio).”. In New York, at her Art of this Century, [t]he Surrealist gallery was the most engaging area. Projected through its concave walls of laminated wood were baseball bat “arms,” each holding an unframed painting, thrust up, down, or out toward the viewer. Another gallery, painted white with transparent screens over the windows to soften the light from 57th Street, was used both for temporary exhibitions and as a place where viewers could study the paintings stored in open bins designed by Kiesler. A few of the paintings, furnishings, and objects, such as one of Vail’s collaged bottles that had been shown with other, similar ones in a theatrical niche in Art of This Century, were included in the exhibition.(Virginia Pitts Rembert)

In 1946, Guggenheim published the first of three versions of her memoirs, Out of This Century, which she revised in 1960 and again in 1979. So forthcoming was she about her sexual exploits that she received many harsh reviews; for instance, the art critic Katherine Kuh called it “vulgar.” Herbert Read was more sympathetic, writing her that it was “quite fascinating as an historical document” and that its author was “destined to be called the Female Casanova!” The writer Mary McCarthy characterized Guggenheim as a woman to whom “men were a continental commodity of which one naturally took advantage, along with the wine and the olives, the bitter coffee and the crusty bread.” (Virginia Pitts Rembert). Mary Dearborn’s colourful personal and cultural biography locates Peggy Guggenheim in an array of shifting and colliding cultures, providing a story of this complicated and talented woman and the culture that shaped her and that she went on to transform. Meanwile, Thomas Messer wrote how “Peggy could be–and often was—simultaneously generous and stingy, merry and sad, outgoing and withdrawn, simple and complex…. She had a warm and authentic relationship toward art and artists, but her collecting taste was never methodic and often not even attentive. She was neither a scholar nor an intellectual, although she 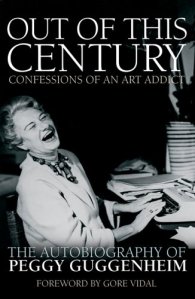 appreciated and admired the company of both and moved within such circles with ease and tact. She was nothing if not direct and outspoken, yet her straightforwardness…masked greater complexities of which she may or may not have been aware. Above all, there was something indescribably sad, even tragic, about Peggy…. In some strange way, she seemed troubled about her very existence, and her tendency to surround herself with men and women of quality was rooted perhaps in her need for attachments that would uphold her. Despite such constraints, Peggy was capable of great courage, style, and grandeur, and she translated these attributes into an admirable life. “ (Thomas Messer’s essay, “The History of a Courtship).