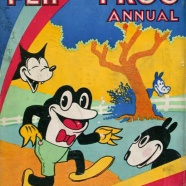 On the 16th of August 1930, Fiddlesticks, the first ever animated sound cartoon photographed in two-strip Technicolour, was distributed by Metro-Goldwyn-Mayer in America. The 6:12 minute clip was the first part of the Flip the Frog series directed and drawn by Ub Iwerks, produced by Celebrity Pictures, with music by Carl Stalling. This ground-breaking cartoon was the first of Iwerks’ works since he left the studio of Walt Disney.

“That cartoon was, ominously, a compendium of what had already become early sound-cartoon clichés. Fiddlesticks lacks both plot and gags, offering in their place lots of dancing, so to speak, and other synchronized action. There is casual vulgarity (a bird’s tobacco juice drips onto Flip’s piano keys), the characters squawk instead of speak (Flip quacks like a duck), the cast includes a Mickey-like mouse (he plays the violin, as Mickey did in just Mickey, released barely a month after Iwerks left Disney), and so on. Iwerks was locked in time. His first few cartoons presented synchronization as if it were entertaining in itself—as it had been, briefly, in his Silly Symphonies—rather than a way to strengthen already promising material. Flip the Frog was no help. Vague as a personality, made up of stock gestures and expressions like all of his animated contemporaries, Flip was awkward and unstable graphically, too. A frog, it turned out, could not be reduced to a crisp pattern as readily as a mouse or a cat. When translated into the sharp contrasts of cartoon formula, what made a frog a frog emerged as for one thing, the conspicuous lack of a nose.” (Michael Barrier, Hollywood Cart 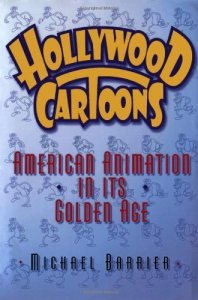 In spite of its shaky and unpromising start, Flip the Frog’s future started looking up. “However unsettled his anatomy in any given cartoon, Flip was being pulled steadily toward Hollywood animation’s center of gravity. By the time of The Village Barber (1931), the third cartoon in the series, he had begun wearing gloves, pants, and shoes in addition to the bow tie he wore in the first cartoon, and he was also losing the lanky, and more froglike, physique of the earliest cartoons. By 1932, Flip had become, like Harman-lsings Bosko, a creature of indeterminate species and variable habits, firmly anchored only in his makers’ awareness of Mickey Mouse’s popularity.” (Michael Barrier)

Iwerks’ cartoon brought something fresh, unprecedented which set him apart from Disney’s style. “Flip’s evolution took place in cartoons whose dominant comedy was cheerfully rude, to an extent rarely approached in the Disney or Harman-Ising cartoons. Even when the comedy was not off-color, the Iwerks cartoons still had a strikingly eccentric texture. At the beginning of The New Car, on a used-car lot, the anthropomorphic cars move rhythmically in their puppylike eagerness as Flip looks them over. O

ne car powders itself and applies lipstick, trying to attract Flip’s attention; it slinks toward him on its hind wheels; it blows a smoke ring and jumps back and forth through it; it licks Flip’s hand like a dog. Such arresting episodes existed only as bits and pieces. There was never any sense in a Flip the Frog cartoon—as there already was in some of the contemporaneous Disney cartoons—that lwerks was trying to construct a film with a distinct comic or narrative shape. Plausibility of any kind was the least of his concerns, thus, the chronic weightlessness of his characters, among other things, and the painfully slow timing.” (Michael Barrier, Hollywood Cartoons : American Animation in Its Golden Age). The characters Iwerks created were quirky and behaved in unexpected ways, they were loopy and weird-looking, which only added to their humorous potential and they were the more memorable for it.