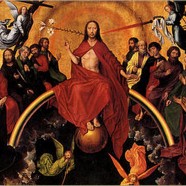 On the 11th of August 1494, German-born Flemish painter Hans Memling died in Bruges, the Netherlands, now Belgium. He was apparently first schooled in art in Cologne and then travelled to the Netherlands (c. 1455-60), where he supposedly trained in the workshop of the painter Rogier van der Weyden. He settled in Bruges in 1465, where he established a large shop and executed numerous altarpieces and portraits.

One of his most notable works is the triptych Last Judgement (1466-1473), now in possession of the Polish National Museum in Gdańsk.  Allegedly the triptych was commissioned by Jacopo Tani, a Florentine merchant, and is an eloquent example of the exchanges between Italian collectors and Flemish artists common in the fifteenth century. “In Memling’s striking portrayal of Christ’s judgement at the Second Coming, Christ stands in the top center, flanked by his apostles on either side with those who are being judged below, all in vivid color and contrast. The New Testament tells us the significance of each participant in the final judgement. First and foremost are the supplicants who will be judged according to their works that are recorded in the “book of life” (Revelation 20:12). They will also be judged by their words (Matthew 12:36-37) and their thoughts (Romans 2:15-16). Christ’s role in the judgement is to stand as the ultimate arbiter (John 5:22) but his apostles also share a role in the judgement and “shall sit upon twelve thrones, judging the twelve tribes of Israel” (Matthew 19:28; cf. Luke 22:30).” (Derek Jensen, The Science of the Stars in Danzig from Rheticus to Hevelius).

An eye-catching element in the painting is the centrally placed rainbow, raising the figure of Jesus Christ above the saved and the damned. Abstracted from the painting’s overall atmosphere of torment and suffering beneath it, the rainbow appears quite beautiful and peaceful. Seen as a metaphor of hope for eternal life in heaven or simply a decorative element, Memling’s rainbow reveals a few interesting things about his contemporaries’ knowledge of this magnificent natural phenomenon. “The naturalism of Memling’s rainbow is unprecedented in several ways. As with other natural elements in this unnatural scene, religious foreknowledge is no longer required to read the arc as a rainbow. The color order is entirely plausible, as is the fading of the bow’s innermost arc near the horizon – a disappearance that occurs near the bases of some natural rainbows. …What Memling knew about natural rainbow is a mystery, yet judging by the realism of his Last Judgement rainbow…, he may well have scrutinized rainbows in nature. …Even if Memling had a scientific bent, he would have encountered another difficulty. Although new theories of the rainbow had emerged in the preceding two centuries, their claims were conflicting and their dissemination was uncertain. Aristotle remained the dominant figure, as evidenced by the several books of Questions that Oresme and his learned University of Paris colleagues wrote on Meteorologica. On the seemingly simple matter of choosing rainbow colors, Memling faced a medieval smorgasbord: three, four, five, seven, and an indefinite number of colors had all been offered. The number of Memling’s rainbow colors (with careful scrutiny, approximately six) in his Last Judgement is less remarkable than their naturalistic blending.”  (Raymond L. Lee, Alistair B. Fraser, The Rainbow Bridge: Rainbows in Art, Myth, and Science.) 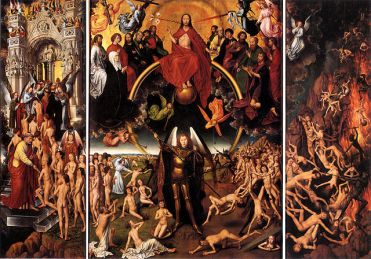 “Memling’s Last Judgement rainbow does depart from nature in one significant way. No less impossible than it is visually compelling, his Judgement rainbow forcefully swoops forward from its base at the horizon to Christ’s seat in the foreground. Like many later artists, Memling apparently (and understandably) assumes that the rainbow is bound by the rules of aerial and linear perspective, just as any other landscape element is. But because the rainbow is an image rather than an object, it cannot display any perspective foreshortening, regardless of the viewer’s position. Thus the rules of linear perspective applicable to objects do not apply to the rainbow, a distinction that many artists have either overlooked or simply rejected. …However, we should not take the rainbow’s curious placement to mean that Memling was not concerned with optical geometry. For example, Memling’s modelling of the reflections of objects in Saint Michael’s curved breastplate is both detailed and optically accurate. Only his rainbow departs from the optical rules of the everyday world, whether intentionally or not.” (Lee, Fraser)