On the 16th of June 1881, Marie Laveau, Louisiana Creole ‘princess’ of Voodoo, died in New Orleans, Louisiana, aged 79. “A nineteenth-century free woman of color, she is a founding figure of the African-American voodoo tradition. Little is known about Marie Laveau and her introduction to voodoo. Originally a devout Catholic, she “miraculously” transformed herself into a theatrical and flamboyant spiritual leader of the black community while still a young adult in 1830. Her presumed abilities as seer, spell weaver, and voodoo priestess made Laveau one of the most influential and politically powerful members of a racist and sexist New Orleans society. Today, New Orleans honors her each year during Mardi Gras and maintains her grave as a historical site. In popular legend, Laveau is still alive and conjuring in the city.” (Feminist Studies, Vol. 16, No. 2, Speaking for Others/Speaking for Self: Women of Color ,Summer, 1990).

Because of her prominence within the history of Voodoo in New Orleans, Laveau has inspired a number of artists, musicians and writers, such as the African American assemblage artist Renee Stout who often uses Laveau as a visual symbol; her personality inspired a number of fictional characters as well, the best known of which comes to life in Jewell Parker Rhodes’ novel Voodoo Dreams: A Novel of Marie Laveau (1993). The writer transforms Laveau into something of a self-styled feminist icon: “Interesting in that novel is the idea of the woman as a kind of trickster figure, with the awareness that the trickster figure has most often been represented as male. (…) women’s magical powers as means of survival are often denounced and called witchcraft, while

In Voodoo Queen: The Spirited Lives of Marie Laveau (University Press of Mississippi, 2004), anthropologist Martha Ward suggested that Laveau’s affliation with Voodoo was perhaps as much a result of growing up in a racist environment as it was an affirmation of African identity or a means of African religious endurance. Prewar white people were continuously plagued by the fear of retaliation and revenge by those they oppressed. Voodoo, with its large popular following, represented a way of rebellion for these exploited layers of the population, which was beyond any limits of their knowledge or control. Ward also implies that the origins of the demonization of Marie Laveau originate almost exclusively in white popular memory. She believes that they hail from postwar racism, particularly within the English-language press of the time, which could not relate on any level to Laveaus’ community of established, free black, francophone Creoles.

This was a society steeped in folklore, ritual, religion and myth. “For those who had the good fortune to grow up in an Afro-American community-whether north or south-our earliest memories include beliefs about man and nature that fascinated, and sometimes terrified, us. If you eat fish and milk at the same time, you’ll die. If you walk under a ladder, you’re sure to have bad luck. Step on a crack, break your mother’s back. (…) Perhaps there is something terr 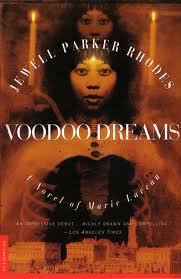 ibly right about this strong propensity for the supernatural in Afro-American life. After all, the “Grand Narrative” of the Western Enlightenment assumed that the mere fact of melanin confined all people of color to bestial irrationality. In that grand narrative, whiteness was written as the only hue that was both natural and rational. The marginal spaces left for color were the non- rational and the peversely supernatural. It is understandable, therefore, that, in the New World, African captives who had been stolen by enlightened Europeans would transform these spaces of color into the vivid, spiritual common sense called Voodoo. Voodoo-which is most elaborately practiced in the New World in Haiti-is indisputably a woman’s domain. Its West Coast African origins situate the religion’s agency in the Priestess too.” (Houston A. Baker, Jr. In African American Review, Vol. 29, No. 1, Spring, 1995). And no woman will ever be better remembered for her spiritual powers than Marie Laveau.