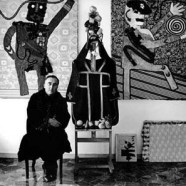 On the 15th of June 2003, Italian painter, sculptor, writer and anarchist Enrico Baj died in Vergiate, Italy. In his works he focused mainly on politically engaged themes such as the threat of nuclear war or the political situation in Italy under Berlusconi. Baj was one of the founders of the Nuclear Art Movement that made reference to contemporary fears about nuclear war and human annihilation. His “obsession with the atomic age even led him to apply the term “heavy water” to the emulsions of enamel paint and distilled water that he used in the late 1950s.” (Christopher Masters, Enrico Baj (Obituary), The Guardian, 9 July 2003). Baj’s artistic roots originate in Dada and Surrealism, which he came to know firsthand after meeting Marcel Duchamp, André Breton, and Max Ernst in Paris. It is probably from these acquaintances that he developed penchant for found objects and readymade materials, which he inventively incorporated into his collages. The occasional use of advertising in his works links him also to Pop art sensibilities.

Baj is perhaps best known for his baffoonish images of generals lavishly decorated with medals which, for him, represented empty symbols of honour and status. “Enrico Baj completed forty paintings in the late 1950s and early 1960s that feature a medal-emblazoned military figure. …These paintings are overtly topical, commenting on political oppression, the madness of France’s war with Algeria, and the generals that made a mess of it. While his painting is figurative and representative, pointing to particular themes rather than to the emotional subconscious, the thickly textured surfaces and rolling colors of Baj’s canvases show an affinity with expressionism.” (Emily Burke, Brian P. Kennedy, Modern and Contemporary Art at Dartmouth: Highlights from the Hood Museum of Art). The artist’s attitude to these personifications of military power is clear enough from the demented appearance they assume in his work, and this impression is confirmed by the commentary he wrote in 1966 for a short anti-war film by Raffaele Andreassi: “Wars, generals, decorations, wounds, amputations. As consolation the motherland gives you a few pretty coloured ribbons and maybe a medal that bears the inscription “smelted from the bronze of the enemy”. All madness. Total madness.” 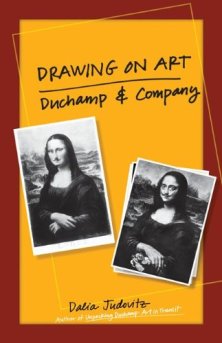 Another important feature of Baj’s art is his incorporation of the Duchampian idea of ‘collaboration’ which implied not so much the actual contact with other artists but rather appropriation of already existing works of art. Among his most distinguished ‘collaborative’ projects are Picasso’s Guernica and Duchamp’s version of the Mona Lisa, L.H.O.O.Q. His use of motifs from Guernica is most visible in his massive 1972 painting Funeral of the Anarchist Pinelli, which was banned after the murder of the police officer believed to be responsible for Pinelli’s death in custody. “In 1965, Enrico Baj collaborated with Duchamp on a new version of the Mona Lisa entitled Homage to Marcel Duchamp, which was shown at La Fête à la Joconde (Celebration of Mona Lisa) exhibition at the Mathias Fels Gallery in Paris in 1965. He borrowed and superimposed Duchamp’s features with eyeglasses on the Mona Lisa, thereby not only appropriating Duchamp’s L.H.O.O.Q. but also enlisting Duchamp in a deliberate parody of his authorship. …He presents Duchamp in the guise of an effigy, whose overbearingly mannish looks despite the female attire allude to the monumentalization of the artist’s image. The draped ribbons framing the image like a halo mock the sense of sanctity associated with both art and the artist. Baj redirected Duchamp’s gesture of exposing the assimilation of art and commodity in L.H.O.O.Q. to that of raising the spectre of the artist’s image as a commodity in its own right. …In a photograph of the show’s opening, Duchamp is shown smiling, enthroned in a chair right underneath Baj’s work, next to his wife, along with Baj and his wife, among others. The photo records not only his willing collaboration and complicity with Baj’s appropriation but also his artistic sanction of this act, insofar as his presence legitimizes Baj’s attempt to draw on his work.” (Dalia Judovitz, Drawing on Art: Duchamp and Company)

Indisputably, Baj brought an urgent, refreshing and unique voice to the art of his time, playing unashamedly with the wide spectrum of artistic forms and styles. He would go beyond set boundaries, with no need to be defined by any particular movement or trend. For example, his association with Surrealism can be easily contradicted by his collaboration with CoBrA, the European avant-garde movement which was known for its antipathy towards Surrealism. Baj’s works play interchangeably with Surrealism, Dada, Pop art, or even Tachisme. Despite this multiplicity of influences, there is one common denominator in Baj’s art – his anarchism and critique of state policies expressed in such works as Nixon Parade, Berluskaiser (a reference to the politician-crook Berlusconi), Apocalypse, or Monument to Bakunin (referring to anarchist Mikhail Bakunin). A good part of CIRA, the anarchist library in Lausanne, was constructed thanks to his generosity. He financed the first Russian translation and printing of Voline’s Unknown Revolution. Like other anarchist artists – Camille Pissarro, Paul Signac, Vlaminck and others – he gave away lithographs, objects and texts to comrades and allowed the free use of his works by them, as well as the use of his table and wine cellar!