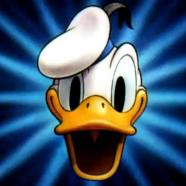 On the 9th of June 1934, Donald Duck debuted in Disney’s The Wise Little Hen, which was part of the Silly Symphonies series of theatrical cartoon shorts. The anthropomorphic white duck with a yellow-orange bill, legs, and feet, dressed in a blue sailor suit with a cap and a black or red bow tie, is one of the most popular characters in the Disney family, and probably, due to his distinctive semi-intelligible speech and mischievous personality, one of the most recognizable cartoon characters in the world.  His voice created by Clarence Nash and performed by him for almost fifty years, is distinctive both for its duck-like sounds and the fact that it is often difficult for anybody to understand. Yet, Donald’s explicit facial expressions and general behaviour, dominated by his positive outlook on life with occasional outbursts of rage, leave no doubt as to what the stories are about.

From ‘biographical’ facts on Donald Duck we know that he was supposedly born in 1920 in Duckburg, Calisota, where he lives with his three nephews Huey, Dewey and Louise. Donald’s Father is Quackmore Duck, his mother is Hortense McDuck, and his twin sister is Della Thelma Duck. Donald Duck is a descendant from both the McDucks and the Coots, and, according to the cartoon Back To Long Ago Donald appears to be the reincarnation of the sixteenth century sailor, Pintail Duck. Donald’s full name is Donald Fauntleroy Duck. His middle name appears to be a reference to his sailor hat, which was a common accessory for Fauntleroy suits. Donald is known for his cooking talents, with pancakes being his speciality. The love of Donald’s life is Daisy Duck, over whom he fights passionately with his own cousin Gladstone Gander. Donald Duck has tried various jobs throughout the years, with not too much success though. What he really is good at is shining coins for Uncle Scrooge McDuck. Donald is also known for his short-lived adventure with the Nazi movement, portrayed in the 1942 cartoon Der Fuehrer’s Face, a short anti-Nazi propaganda film.

Originally titled Donald Duck in Nutziland, the eight-minute cartoon features a German “oom-pah” band parading through a German town singing the “virtues” of The Fuhrer. They awaken Donald Duck, who regrettably has to work in a Nazi munitions factory. After a frantic workday of making bombs and saluting Hitler, Donald awakens from this nightmare to find that he is still living in the good old United States of America. Spike Jones’s title song, “Der Fuehrer’s Face,” was an instant hit, and the cartoon won an Academy Award for best short subject.” (Jonathan Petropoulos, John K. Roth, Gray Zones: Ambiguity and Compromise in the Holocaust and Its Aftermath). The film’s scriptwriters, Joe Grant and Dick Huemer stated that, “In this war, humor and fantasy have enlisted on the side of the united nations. They’re fighting, fighting hard – and their smash-Hitler weapon is the animated cartoon. No other weapon of propaganda can ridicule the Axis, expose its absurdities, as deftly.” (Petropoulos, Roth) 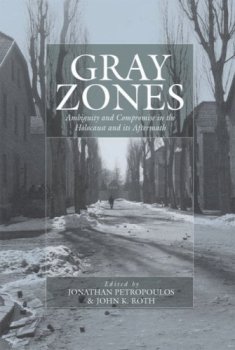 Der Fuehrer’s Face was intended, most of all, as a tool with which to poke fun at the enemy. However, via the use of the technique of contrast, it also enabled a different and rather uplifting outlook on the difficult war situation in the United States. “Donald’s audience would have been familiar with rationing and overtime at defense plants from their own experience. Der Feuhrer’s Face demonstrated humorously how much worse the situation was in Germany. Donald’s dream self is obviously motivated solely by fear rather than any sort of allegiance to Hitler, and any slight sign of resistance, such as grumbling on the assembly line, is met with instant threats of violence. Though the tone is light and made even more comic by the surreal hallucination sequence, the film nonetheless brings home its points about forced labor, shortages, and fear among those under Hitler’s rule and the corollary that Americans are (or should be) happy to work for their country’s war industries.” (A. Bowdoin Van Riper, Learning from Mickey, Donald and Walt: Essays on Disney’s Edutainment Films). Furthermore, the lack of narrator, replaced by diegetic voices of authority appearing as orders from either the marching band or loudspeakers at the munitions factory, reinforce the sense of a totalitarian environment.

Disney war propaganda was not limited exclusively to anti-German (or anti-Japanese, as in the case of Commando Duck (1944)) animations. The new medium was used for educational purposes too. In fact, Disney made films for every branch of the U.S. military and government. The government looked to Walt Disney more than any other studio chief as a builder of public morale providing instruction to sailors and soldiers. At least six major branches of the government had engaged Disney to reach the public, usually with the aid of Donald Duck or Pluto the pup. The majority of the films were created for training purposes. One of Disney’s best customers was the Navy, ordering more than 50 films on every war subject from bombing and gunnery to paratroop training. War propaganda became a serious business for Disney, 90% of his 550 employees being involved in the making of this kind of productions. 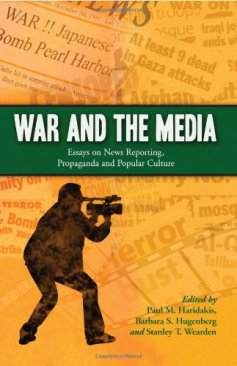 Funnily enough, the war propaganda opened a new chapter for the studio. In an article from 1945, Walt Disney wrote openly about its impact on the studio’s future plans: “The motion picture took a leading part in all phases of wartime education-propaganda and information, as well as training. It explained and supported ideas, it showed with impartial fidelity the course of events, it made hidden phenomena visible, and it demonstrated the way to control them. So successful was the motion picture in this task of education for war, that close attention was once more given to its capacity as a means for enlightenment and teaching in the work of peace. Educators, scientists, statesmen and prelates have led a chorus of enthusiastic interest in the use of motion pictures for formal instruction. It has been recalled that films were considered educational instruments long before the development of the entertainment industry.” (Walt Disney, Mickey as Professor, The Public Opinion Quarterly, Vol. 9, No. 2, Summer, 1945)

← The Feminine Side of Cubism: Marie Laurencin Psychic Hélène Smith and Surrealist Automatism →