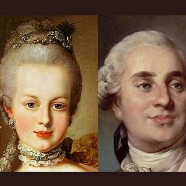 On the 16th of May 1770, the wedding of Marie Antoinette and Louis-Auguste was held at Versailles in the Chapel Royal. Following three centuries of rivalry, France and Austria had finally become allies in 1756, so in order to cement their fresh diplomatic ties, Louis XV and the Empress Maria Theresa arranged the marriage of their respective children: the Duc de Berry, Dauphin of France, aged 15, and Marie-Antoinette, Archduchess of Austria, aged 14. Historian Margaret Hunt pointed out that, until the late 18th century marriage was “the main means of transferring property, occupational status, personal contacts, money, tools, livestock and women across generations and kin groups” (The Middling Sort: Commerce, Gender, and the Family in England, 1680-1780, University of California Press., 1996). However, marriage was also often instrumental in laying claim to political power and reinforcing peace treaties, such as was the case of our young royals’ union. Politics drove their marriage, whilst their personal views and affections were hardly even considered.

Here is how Kathryn Lasky imagines some of the feelings experienced by the very young archduchess in her virtual diary entry from the 15th of May 1770, the day before the wedding: “The roadways were so choked with people to see me that the carriages crawled like snails. We were forced to stop this evening at this castle, La Muette, a few miles from Versailles. We had what the French Royal Family, the Bourbons, consider a “small family supper.” There were only thirty-five of us. I have met for the first time the Dauphin’s brothers, my brothers-in-law. They are both so handsome! What happened to Louis Auguste? However, one of the brothers, the Count of Provence, who is just my age, is quite conceited and terribly delighted with himself. The other brother, the Count Artois, who is a year younger than me, is completely charming. A bit shy, but ready to talk about books and horses and games. Both of them are so much better than their brother. It is not fair! Why am I set to marry the fat one with pimples, who never talks and has dirty nails? I noticed as we sat at the table that at the far end there was a somewhat coarse-looking young woman. Take away her powdered hair and her many jewels, and she would have had the look of the street about her. I inquired of the Count Artois who she was. He looked uncomfortable when I asked, but his brother chimed in, “Oh, the Countess du Barry!” He sneered and the people near us at the table fell silent. I think it is perfectly terrible that the King brought his mistress to this “family dinner.” (…)

It is odd but suddenly the King lost all his handsomeness for me. He seemed very common. I saw flaws. His chin sags a bit too much. His right eye droops and his mouth is much too fleshy. Later: I just went into my bedchamber. I found placed directly on the bed a leather casket about one foot wide and equally long and perhaps eight inches high. I undid the clasp and opened the lid. My eyes were dazzled. Inside were rubies, emeralds, and diamonds — necklaces, bracelets, and earrings. A note said simply, “These are the jewels of France worn by all her Queens. They are now yours. Affectionately, your grandfather-in-law, King Louis XV.” Tomorrow our party drives on to Versailles. Tomorrow is the wedding, the real wedding, where Louis and I shall together walk down a corridor to the famous Hall of Mirrors at Versailles and on to the chapel. The weather does not look promising. But what do I care if it rains on my wedding day? It would be an outrage for the sun to shine. I feel no happiness at all. Just dread and fear.” (Kathryn Lasky, The Royal Diaries of Marie Antoinette, Princess of Versailles).

The young couple made their appearance at the castle in the morning of the fateful day, Marie Antoinette wearing a wedding dress decorated with diamonds and pearls. “After entering the grounds of the Château through the ornamental gates around 10 am, she was installed in the grand apartment of the queen where she prepared for the official wedding in the royal chapel. At 1 pm she made her entry into the king’s study. The Dauphin, dressed in a suit of gold with the diamond of the Holy Spirit, took her hand.  Followed by the king and the princes of royal blood, the young couple crossed the grand apartment packed with people. In the chapel they knelt in front of the altar where the Archbishop of Reims officiated. The king and the royal family surrounded them on their prie-dieus. The dauphin placed the ring on the slender finger of his bride. After the ceremony came the signing of the marriage registry. In his apartment in the early afternoon, the Dauphine received her wedding presents from the groom: a splendid carved chest containing a profusion of jewellery and precious objects. ” (Chateau de Versailles)

“For thousands of years, marriage organized people’s places in the economic and political hierarchy of society. Whatever functions marriage served for the man and woman involved and for the children they produced, marriage was not primarily for their individual benefit. It was a way of raising capital, constructing political alliances, organizing the division of labour by age and gender, and deciding what claim, if any, children had on their parents, and what rights parents had in their children. Marriage served so many political, social, and economic functions that the individual needs and desires of its members (especially women and children, its subordinate members) were secondary considerations. In fact, for most people, whether rich or poor, marriage was as much about getting in-laws as about finding a mate and having a child.” (Stephanie Coontz, ‘The World Historical Transformation of Marriage’, Journal of Marriage and Family, Vol. 66, No. 4, Nov., 2004). While politics was responsible for uniting Marie Antoinette and Louis-Auguste, it also kept them estranged from each other as husband and wife. Just hours after they first met, on their wedding night, the young teenagers were expected to honour their vows and start producing an heir. They were escorted to the bridal chamber by the groom’s grandfather, King Louis XV, who, after after blessing their bed and dispensing some last minute private advice to Louis, gave both a kiss and left the two inexperienced children and relative strangers alone in the room. Unsurprisingly, nothing happened that night or any other night for the next seven years, allegedly due to a medical condition which rendered the duke impotent. Their four children came once his intimate ‘problem’ had been rectified. In spite of Marie Antoinette’s persistence in trying for an heir to satisfy both her parents and in-laws, one has to wonder whether a similar lack of sentiment as expressed in her imaginary pre-wedding diary, could have provided an equally insurmountable obstacle at the start of her married life with Louis.