Posted by ArtLark on May 2, 2021 in Feminism, Lifestyle, Society, Sociology | 14 Comments

On the 2nd of May 1885, Good Housekeeping magazine was founded by Clark W. Bryan in Holyoke, Massachusetts. Still owned by the Hearst Corporation, it has ever since featured articles about women’s interests, product testing, recipes, diet, health as well as literary articles. It has become an institution known for its “Good Housekeeping Seal of Approval”, which, although mainly referring to material goods and consumer items, could, theoretically, be extended to all aspects of its female readers’ lifestyle. Throughout the years, famous writers contributed to the magazine including Somerset Maugham, Edwin Markham, Edna St. Vincent Millay, Frances Parkinson Keyes, A. J. Cronin, Virginia Woolf, and Evelyn Waugh.

However, one of the most thought-provoking feature articles published by Good Housekeeping was Betty Friedan’s groundbreaking feminist article, ‘Women Are People, Too!’ which appeared in its September 1960 issue. Three years prior to this, Friedan had surveyed two hundred of her Smith College classmates during their 15th anniversary reunion and found that many of them suffered from “the problem that has no name”: supposedly happy homemakers in suburban paradises, which they shared with their working husbands and jolly children, these women were bored, frustrated, depressed and anxious. One reportedly said: “I used to think I was crazy to be so discontented, with a fine husband and children. But there’s more to grow up for than that!” In her article, Friedan wrote: “No woman knows where her search for self-fulfilment will take her. No woman starts that search today without struggle, conflict, and taking her courage in her hands. Maybe growth does not come without conflict. When every woman learns to listen without fear to the voice inside her instead of smothering it, it may lead — perhaps even more surely than rockets into space — to the next step in human evolution. This could come about when women begin to use the education, the freedom, the labour-saving appliances, the added years of life which have become available to them in recent decades.” Friedan’s article thus called for women to challenge and assert themselves outside their domestic cocoon.

While this may sound obliterated and naïve in current terms, Friedan’s piece caused a massive stir in reconfiguring ideological parameters in the United States as far as gender bias was concerned. It was the catalyst for her future book The Feminine Mystique, published in 1963, which was unprecedented in tackling unexpressed feminist ideas head on. In the following decades, though, we have learned that a more complicated vision of 1950s womanhood emerged in general readership magazines. Joanne Meyerowitz, a Yale historian, showed that that there was more to Friedan’s claim that 1950s magazines represented women in submissive and domestic roles – there were also many depictions of women as active and independent. There has also been abundant criticism of her book for it being classist as directed mainly at middle-class women. In Shaping Our Mothers’ World: American Women’s Magazines, Nancy Walker argued that “rather than presenting a “unitary, cohesive image” of American homelife and gender in mid-century American society, [women’s magazines] acknowledged differences among women, promoted social mobility, and responded to changes in women’s lives.” (Jessica Weiss, review of Shaping Our Mothers’ World: American Women’s Magazines by Nancy A. Walker, in The Journal of American History, Vol. 89, No. 2, History and September 11: A Special Issue, Sep., 2002). Walker wrote that the a great amount of instruction on clothes, domestic life, and manners and the varied content that celebrated women’s achievements indicate that editors assumed diverse female readers with aspirations to middle-class status, many of whom led lives outside the home. 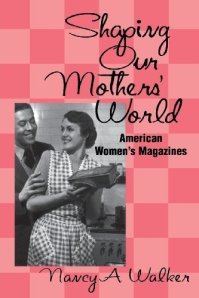 “How much women’s magazines “shaped our mothers’ world” is debatable, yet they remain an important window into the nation’s attitudes toward gender. Walker’s identification of the social aspirations they marketed in the 1950s, which she connects to mass culture and the Cold War and to magazines’ attempts as business enterprises to accommodate the changes in women’s lives, is significant. By making the homemaker the arbiter of taste and creator of style and luxury, magazines catered to the economic aspirations, creativity, and consumer appetites of homemakers and employed women alike. Selling social aspiration helped navigate a contested transition: as women expanded the definition of the domestic to include employment, how would middle-class status be defined? The women’s magazines placed their hopes with “Mrs. Consumer,” who kept that primary family role even as she supplemented the budget that sup-ported her purchases and through her purchases supported the “American way of life,” as they portrayed it , during the Cold War.” (Jessica Weiss)