Home » Art » Vogue: The Elitist Dream for The Masses

Vogue: The Elitist Dream for The Masses

On the 17th of December 1892, the first issue of Vogue was published in America. The popular fashion magazine, which has reached by now an average monthly print circulation of 11.3 million, was founded by Arthur Turnure as a weekly society publication. Vogue magazine became instantly the biggest competitor to another famous fashion magazine, Harper’s Bazaar, and combined “the three forces of the fashion industry in America – fashion journalism, ready-to-wear manufacturing, and fashion advertising…” (Daniel Delis Hill, As Seen in Vogue: A Century of American Fashion in Advertising).

The first cover with a black and white picture of a well-dressed debutante, made a clear statement to the targeted demographic social group as its readers – New York’s elite. Turnure had a very clear vision of what kind of lifestyle he wanted to promote in the pages of his magazine, “Life has in the highest degree an aristocracy founded in reason and developed in natural order. Its particular phases, its amusements, its follies, its fitful changes, supply endless opportunities for running comment and occasional rebuke. The ceremonial side of life attracts the sage as well as the debutante, men of affairs as well as the belle. It may be a dinner or it may be a ball, but whatever the function the magnetic welding force is the social idea.” (Emily Esfahani Smith, The Early Years of Vogue Magazine, acculturated.com). The name “Vogue” was an idea of the magazine’s editor, Josephine Redding. And the art director, Harry McVickar, “created the eighteen-century-style shepherdess with the V on her bodice that was used as a branding icon in advertising for Vogue. Quite possibly this trite representation was a reference to Marie Antoinette’s predilection for costume parties and fancy dress balls, one of which she and her ladies had attended dressed as shepherdesses.” (Hill) Both the magazine’s name and its brand mark were clear references to French culture, life style and fashion, linking the American elite to European influences.

The first articles were concerned with society, social events and fashion, but the later topic revolved around wardrobe advice rather than the promotion of the latest fashion trends. Despite the fact that throughout Vogue’s history there were only four men depicted on the magazine’s front cover, and the first one, Richard Gere, not until 1992, Vogue was initially targeted at female as well as male audiences. “For example, two regular feature stories were “Of Interest to Her” and “As Seen By Him.” In these columns, fashion of garment construction, fabrics, silhouettes, and accessories were usually generalized unless relevant to the social theme.” (Hill)

Almost straight from the beginning, Vogue placed a strong emphasis on art, reflecting developments of various art movements in consecutive periods of art history. When in 1905 Condé Montrose Nast became the second owner of Vogue, he “took particular interest in the cover designs. He encouraged his editors and art directors to seek out the finest illustrators and photographers in the world. He wanted artists with a contemporary vision about fashion that matched his own. Contributors included illustrators such as Helen Dryden, Georges Lepape, Eduard Benito, and George Plank. Modern-day masters such as Giorgio de Chirico, Salvador Dali, and Pavel Tchelitchew were also commissioned to create covers for Vogue. From the 1920s onward the list of contributing photographers was a who’s who in the field: Cecil Beaton, Horst P. Horst, George Hoyningen-Huené, Irving Penn, Clifford Coffin, and Helmut Newton.” (Hill). Overall Dali created four covers for the famous magazine. Also such artists as Joan Miró, Marcel Duchamp, Andy Warhol or Picasso contributed to Vogue in their own ways. For example, Duchamp’s The Large Glass, photographed by Erwin Blumenfeld, appeared on one of Vogue’s covers with a model posing next to it. 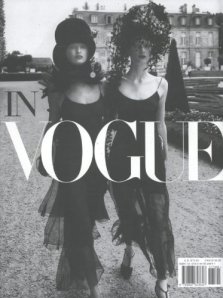 The association of Vogue with art and high society has been celebrated annually since 1971 at the opening of the Metropolitan Museum’s fashion exhibition – the Met Ball is hosted by Vogue magazine and attended by A-list celebrities, politicians, designers and fashion editors. Thus, despite the fact that Vogue magazine is nowadays accessible to almost everyone, its elitist character is strictly maintained. Its mission is not only to instruct the reader on the current fashion trends but to connect to narratives transporting them to certain “ideas about brand experience.” (Barbara J. Phillips, Edward F. McQuarrie, ‘Narrative and Persuasion in Fashion Advertising’, Journal of Consumer Research, Vol. 37, No. 3, October 2010)