Home » Architecture » Wassily Kandinsky: Architect of the Future of Art 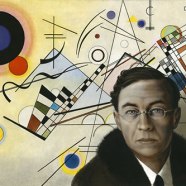 Wassily Kandinsky: Architect of the Future of Art

On the 13th of December 1944, Wassily Kandinsky, an influential Russian painter and art theorist, died in Neuilly-sur-Seine, France. He has been credited with painting the first purely abstract work in the history of modern art. In the summer of 1922 he began teaching at the Bauhaus in Weimar, where in the same year he created a portfolio of prints called Kleine Welten (Small Worlds). 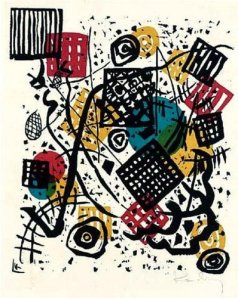 Composed in the abstract manner, typical of Kandinsky’s oeuvre, Kleine Welten are images of buildings and cities. At first sight, the compositions seem merely clusters of unrecognisable objects. But on closer and more thorough investigation they start revealing utopian visions of vibrant architectonic metamorphoses. Karen Koehler from the University of Massachusetts suggests that Kleine Welten are “Kandinsky’s personal response to the city of Moscow and the social and political changes he witnessed while living there during World War I and the Bolshevik revolution.” (Karen Koehler, ‘Kandinsky’s Kleine Welten and Utopian City Plans’, Journal of the Society of Architectural Historians, Vol. 57, No. 4, Dec. 1998).

During his stay in Moscow between 1914 and 1921 Kandinsky experienced firsthand the important social and political transformations which would stigmatise the future of the Russian nation for many generations. Living in an apartment in the centre of Moscow, Kandinsky found himself in the heart of those great historical events. And they had a great impact on him. This is how he perceived Moscow at the time:

“Moscow: the duality, the complexity, the extreme agitation, the conflict and the confusion that mark its external appearance and in the end constitute a unified, individual countenance; the same qualities in its inner life, incomprehensible to the unfamiliar eye… and yet, just as unique and in the end wholly unified – I regard this entire city of Moscow, both its international and external aspect, as the origin of my artistic ambitions. It is the tuning fork for my painting. …I have simply painted and am still painting, this same “model” with ever greater expressiveness, in more perfect form, more in its essentials.” (Ed. Kenneth C. Lindsay and P. Vergo, Kandinsky, Complete Writings on Art, 1994). 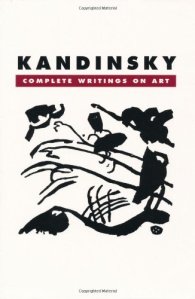 The key concepts of  “complexity”, “conflict” and “confusion” are reminiscent of Kleine Welten, utopian worlds which, in their final form, become “wholly unified”.  As for Kandinsky, he was not just a passive observer of the socio-political transformations in Russia; between 1918 and 1921 he became active in the areas of education, publishing and museum reform. He joined The People’s Commissariat for Education and, for over a year, was an editor of Isskustvo (Art). In April 1919, Kandinsky wrote an article for Die Freiheit, the newspaper of the Independent Socialist Party in Berlin, in which he mentioned Russian plans for new architectonic ventures: “The architects, who are holding a big conference at the end of March, are working on plans for the redevelopment of Moscow. These plans contain much that is new and interesting. Old Italian architectural ideas and mathematical principles are being revitalized and woven into these new plans.” (Die Freiheit, Kunstfrühling in Russland, 9 April 1919).

The new architectonic plan, especially Ebenezer Howard’s garden-city concept, implied redistribution of “both population and production from large cities like Moscow to small worker’s villages and satellite settlements…” Also, “the Mossovet plan for the Moscow area, developed under Zholtovsky’s leadership, … proposed a system of satellite cities that would relieve the congestion of Moscow. These smaller towns were conceived as dormitories for Moscow workers by some of the designers; others treated them as independent communities with their own economic base.” (Koehler). Therefore, it is rather obvious that Kandinsky’s concept of Kleine Welten (Small Worlds), found a great source of inspiration in these architectonic plans. Particularly Kleine Welten X reminds of an abstract urban plan in which the central area is surrounded by smaller satellite objects. “Less specific, although no less significant, are the emphases on the grid motif and the idea of mapping in general, as seen in Kleine Welten V, VII and IX. The grids and projected spherical forms in these compositions are obviously linked to Kandinsky’s personal language of shifting aerial and frontal vantage points. The artist’s preoccupation with mapping became stronger in his work throughout the twenties, as in his watercolour Zwei, painted at the Bauhaus in 1924.” (Koehler). 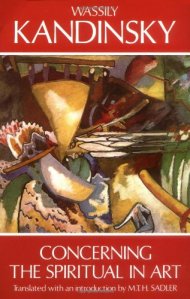 Whilst one should avoid a one-dimensional interpretation of Kandinsky’s work, it is undeniable that the effect of the Bolshevik revolution and the wind of social change it brought about, inspired Kandinsky as well as other artists, such as Malevich and Tatlin, to perceive the future as a space for imagination and intellect. They produced visions of vibrant abstract utopias, which according to Kandinsky, had the power to reinvent reality: “Art always goes in advance of all other realms of spiritual life. Its advanced role in the creation of nonmaterial benefits by comparison with other realms, derives naturally from that high degree of intuition that is essential to art. …What yesterday was a mad “idea” today becomes a fact, from which, tomorrow, will come material reality.” (Wassily Kandinsky, The Great Utopia (Essay), 1920).