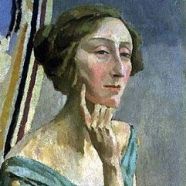 On the 9th of December 1964, Dame Edith Sitwell, a British poet and critic, died in London. Both as an artist and as a public personality, she was a provocative and controversial figure. Her poetry, influenced significantly by the French symbolist movement, was often experimental and multidimensional. In her early career she focused mainly on playing with different melodies and rhythms in her poetry lines. In the introduction to her 1949 poetry collection, The Canticle of the Rose, she wrote: “At the time I began to write, a change in the direction, imagery and rhythms in poetry had become necessary, owing to the rhythmical flaccidity, the verbal deadness, the dead and expected patterns, of some of the poetry immediately preceding us.” She was highly acclaimed for her war time poetry, and her 1940 poem Still Falls the Rain was set to music by Benjamin Britten as Canticle III: Still Falls the Rain.

It seems that in her work as much as in her private life, Sitwell went by different melodic and rhythmical patterns. Her early childhood was not an allegro at all. Her mother, who claimed her own descent through female lines from the Plantagenets, despised her daughter for her bodily imperfections; Sitwell suffered from a spinal deformation, which her father tried to ‘cure’ by locking her into an iron frame. These bitter experiences of childhood made Sitwell seek independence early on in her adult life. At the age of twenty-five she moved with her governess and friend, Helen Rootham, to a small flat in London, where she focused on her writing career and started engaging in social life within the bohemian circles of London. Among her numerous friends were Gertrude Stein, Virginia Woolf and Dylan Thomas.

In 1927, at a gathering in Gertrude Stein’s Parisian salon, Sitwell met the surrealist Russian painter Pavel Tchelitchew, who would become her most important, yet most unfulfilling love object. Tchelitchew approached Sitwell and charmed her instantly: “Staring at me again as if he had seen a ghost, he said to me, ‘You are Russian, are you not?’ ‘No, I am English.’ ‘But I am sure you are Russian.’ He then told me that I bore such an extraordinary resemblance to Father Zosimov, the saint in The Brothers Karamazov, (who was his father’s confessor and one of his greatest friends) that, hearing that Zosimov’s granddaughter had escaped from Russia and was living in Paris, he was convinced that I was the woman in question.” (Richard Greene, Edith Sitwell: Avant garde poet, English genius).

Pavel Tchelitchew, born to an aristocratic Russian family, forced to leave Moscow after the Bolshevik Revolution, joined at the beginning of 1920s an art academy in Ukraine, where he became a Cubist. In 1922 in Berlin he had his first exhibition, which got him positive public acclaim. Whilst still in Berlin he acquainted Diaghilev and Stravinsky, and got involved in a romantic relationship with a Chicago pianist Allen Tanner. The pair moved eventually to Paris. In 1924, Tchelitchew withdrew himself from the Cubist movement, which he thought “was disrespectful of human anatomy” (Greene), and set himself as a leader of ‘neo-romantics’.

In 1925 Tchelitchew was discovered by Gertrude Stein, who bought few of his paintings and took on him as her new protégé. “Stein’s companion, Alice B. Toklas, immediately decided Tchelitchew was a piece of work – malicious and ready to use Stein for his advantage. Although Toklas’s view of Tchelitchew cannot be taken at face value, others thought much the same. The American novelist Glenway Wescott who knew the painter for thirty years spoke of ‘his craziness – he has always been in a certain way insane, non-sane, psychopathological’ – and he told John Pearson that the painter was ‘a really terrible person’.” (Greene).

Despite being warned by Stein of the painter’s difficult and complex character, Sitwell was instantly drawn to him. Perhaps being a ‘rebel’ herself she thought that he was the only person who could understand her odd life. And in a way he did provide for her eccentricities. She loved him wildly, but the character of their relationship is difficult to define. Knowing of Tchelitchew’s homosexuality, it is justified to think that their relationship had more of a platonic character rather than a sexual one. However, Tchelitchew claimed that, “People like me who are sexually mad have absolutely no obligation to their lovers” (Greene). Therefore it is possible that a brief sexual liaison between the two sparked Sitwell’s hope for forming a more serious relationship with the painter.

To a certain extent Tchelitchew was also taken by Sitwell’s intelligence and her ‘Plantagenet look’. He painted her portraits and helped to reinvent her image, which would later become her brand mark. In the 1930s he designed  strange and original clothes for Sitwell, which she wore with pride. Dressed in gowns of brocade or velvet with gold turbans and a plethora of rings, she looked like a creation of the old masters of painting.

Throughout their lifetimes they exchanged hundreds of letters. But in none of them is there an indication that they were ever lovers. Sitwell was faithful in her heart to Tchelitchew until after the war, when the painter made it finally clear that he was not in love with her and put an end to her emotional torment. This broke her heart, but as any good poet would do, she turned her grief and sorrow into poetry.

Still falls the Rain—
Dark as the world of man, black as our loss—
Blind as the nineteen hundred and forty nails
Upon the Cross.

Still falls the Rain
With a sound like the pulse of the heart that is changed to the hammer-beat
In the Potter’s Field, and the sound of the impious feet

On the Tomb:
Still falls the Rain

In the Field of Blood where the small hopes breed and the human brain
Nurtures its greed, that worm with the brow of Cain.

Still falls the Rain
At the feet of the Starved Man hung upon the Cross.
Christ that each day, each night, nails there, have mercy on us—
On Dives and on Lazarus:
Under the Rain the sore and the gold are as one.

Still falls the Rain—
Still falls the Blood from the Starved Man’s wounded Side:
He bears in His Heart all wounds,—those of the light that died,
The last faint spark
In the self-murdered heart, the wounds of the sad uncomprehending dark,
The wounds of the baited bear—
The blind and weeping bear whom the keepers beat
On his helpless flesh… the tears of the hunted hare.

Still falls the Rain—
Then— O Ile leape up to my God: who pulles me doune—
See, see where Christ’s blood streames in the firmament:
It flows from the Brow we nailed upon the tree

Deep to the dying, to the thirsting heart
That holds the fires of the world,—dark-smirched with pain
As Caesar’s laurel crown.

Then sounds the voice of One who like the heart of man
Was once a child who among beasts has lain—
“Still do I love, still shed my innocent light, my Blood, for thee.”

← The Passions of Camille Claudel: Sculptor, Woman Beyond the Veneer: Charles Rennie Mackintosh →