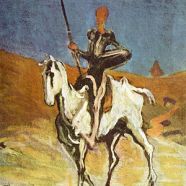 Posted by ArtLark on October 21, 2020 in Biography, Books, Literature | 2 Comments

. Its original title “Die Wahrheit über Sancho Pansa” was given by Max Brod, who later published the text in the volume “Beim Bau der chinesischen Mauer”.  The parable is composed of only two sentences, yet its meaning is very complex and not entirely clear:

The Truth about Sancho Panza

Without making any boast of it Sancho Panza succeeded in the course of years, by feeding him a great number of romances of chivalry and adventure in the evening and night hours, in so diverting from himself his demon, whom he later called Don Quixote, that this demon thereupon set out, uninhibited, on the maddest exploits, which, however, for the lack of a preordained object, which should have been Sancho Panza himself, harmed nobody. A free man, Sancho Panza philosophically followed Don Quixote on his crusades, perhaps out of a sense of responsibility, and had of them a great and edifying entertainment to the end of his days.

, Sancho Panza is a servant to Alonso Quijano, a retired country gentleman who, after suffering from a stroke of madness, turns himself into a chivalrous knight-errant and his servant into his squire. Yet, in Kafka’s parable the roles of the two characters are visibly reversed – Sancho Pansa is the creator of Don Quixote, who on the other hand becomes his ‘devilish’ projection. In Kafka’s text “Don Quixote’s prospective victim actually frees himself from his tormentor by means of an extraordinarily cunning contrivance: he nourishes his devil with romantic tales of chivalry and secedes in diverting him from his true object. Pansa is able to turn Quixote into a harmless idiot, whose deeds, moreover, provide an endless source of entertainment for Pansa till the end of his days.“

It is speculated that the character of Sancho Panza represents Kafka himself and that the parable is a kind of “commentary on Kafka’s understanding of his own literary production… According to this reading, the cunning of Kafka’s art is related to the cunning of Sancho Pansa, who cleverly splits off and fictionally objectifies a part of his own person, whom he calls Don Quixote, thereby freeing himself from the torments to which this “devilish” aspect of the self otherwise subjects the writer”

(Gray). This interpretation suggests that Kafka’s Don Quixote is Sancho’s alter ego, created for the purpose of the latter’s inner liberation.

Looking closely at Kafka’s life and analysing the traits of his personality it is justified to think that the parable may refer to the writer’s search for a comforting alter ego. In fact, his fear of being perceived as mentally and physically repulsive stood in opposition to how he presented himself in public. His close friend, Max Brod, described him as a composed and eloquent person: “Kafka had a very high reputation – simply by virtue of his personality, his occasional remarks, and his conversations – because no one at the time beyond myself knew his literary work. There was no need of his works, the man produced his own effect himself, and despite all the shyness of his behaviour, he was always quickly recognized by men of worth as someone out of the ordinary. At all periods of his life women felt themselves drawn to Franz – he himself doubted he had this effect, but the fact cannot be disputed.”

The split between Kafka’s inner and outer personas, yet a harmonious coexistence of the two, resembles the partnership of Sancho Panza and Don Quixote. One of these literary characters represents reality, the other – fantasy and, as noticed by Freud, as much as they discriminate against each other, they also form a durable partnership. One carries the other into the world of grand adventures, whilst at the same time being tamed by his companion. Perhaps Kafka felt this way about himself. Perhaps his inner Sancho was more of a master rather than a squire to his outer Don Quixote. Perhaps this parable refers to something completely different. But among so many ‘perhaps’ there is one sure thing – the parable is as ‘kafkaesque’ as any of Kafka’s writing could be.

← Princess Rákóczi by Nicolas de Largillière Sartre Vs. Nobel. The Arguments Behind the Refusal →