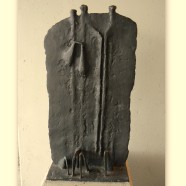 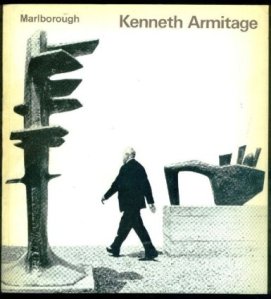 On the 18th of July 1916, sculptor William Kenneth Armitage was born in Leeds, England. He is remembered for producing semi-abstract works, still recognizably human, but sometimes merging into animal, organic or non-organic forms. Armitage’s mature style emerged in 1952 and reached its peak in 1958, when he won best international sculptor under age 45 at the Venice Biennale.

Before the War, as a student at the Slade School of Art, Kenneth Armitage worked in the direct carving method inspired by greats such as Brancusi, Moore and Hepworth. After being demobilised in 1946, he became an art lecturer at the Bath Academy and started carving local material, particularly Bath stone. “The move from direct carving to modelling was occasioned by a growing fascination with the structure of things, whether animal, vegetable or man-made. During his war service) Armitage had specialised in training soldiers to identify the shapes of aircraft and tanks, so that mistakes such as the loss of men and hardware due to ‘friendly fire’ could be avoided. After the War, as a frequent passenger on the Great Western Railway between London and the West Country, he became fascinated with the engineering structures created by Isambard Kingdom Brunel a century earlier, such as Box Tunnel, Saltash Bridge, and especially the Clifton Suspension Bridge. He admired Brunel’s dogged determination, his far- sightedness, and the truth to materials that characterised his bold use of iron. Armitage was also interested in modern architects who, like Brunel, made a virtue of the load-bearing 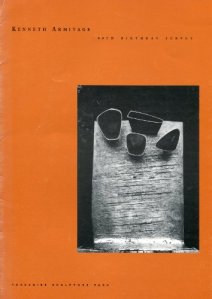 frame as an integral design element. Le Corbusier’s piloti [columns] found an echo in the spindly legs of the sculptor’s figure groups.” (Jonathan Benington, ‘Kenneth Armitage’s ‘People in a Wind’, The Burlington Magazine, Vol. 142, No. 1165, Apr., 2000).

In a 1952 review in Britain To-Day, Philip Hendy, the then Director of the National Gallery commended Armitage’s group figure sculptures for their strong structure and the humanity they exuded. He spoke particularly of one work entitled People in the Wind (1950): “The groups of people which have now emerged from his studio to battle against the wind have a strange and original dramatic charm. Their humanity and their struggle with nature are unmistakable; though each group is conceived as an almost abstract mass, tenuous as skins stretched and dried on poles, tense with the balance of strains and stresses. The simplicity of their conception, the directness of their feeling and the broad facets which they offer give them an unusual harmony with the contemporary architectural setting”.

Herbert Read was commissioned to write a text for the 1952 Venice Biennale catalogue, in which he coined the phrase ‘geometry of fear’ in order to ascribe a similar style and purpose to the artists he included in this group, i.e. Robert Adams, Kenneth Armitage, Reg Butler, Lynn Chadwick, Geoffrey Clarke, Bernard Meadows, Eduardo Paolozzi and William Turnbull. Read’s brief text has since become famous in all chronicles of modern British art: “These new images belong to the iconography of despair, or of defiance … Here are images of flight, or ragged 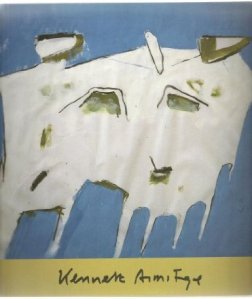 claws ‘scuttling across the floors of silent seas’, of excoriated flesh, frustrated sex, the geometry of fear … Their art is close to the nerves, nervous, wiry. They have found metal, in sheet, strip or wire rather than in mass, their favourite medium … The consistent avoidance of massiveness, of monumental, is what distinguished these epigoni from their immediate predecessor, Moore . . . Armitage is an expressionist: a degothicised Barlach, moving, in his latest work, towards a sardonic commentary on the stretched agony of human relationships, a master of the superficial intricacies of cast bronze.” (From the XXVI Venice Biennale, exh. cat., British Pavilion, Venice, British Council, London, 1952).

Some of Armitage’s sculptures.