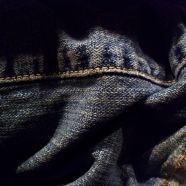 On the 20th of May 1873, Levi Strauss and Jacob Davis received a U.S. patent for blue jeans with copper rivets. In San Francisco, Levi Strauss, a Jewish-German immigrant, had established a profitable wholesale dry goods business importing clothing and fabric to sell in the small stores opening all over California and other Western states to supply the rapidly expanding communities of gold miners and other settlers. Jacob Davis, a tailor in Reno, Nevada, was one of Levi Strauss’ regular customers. In 1872, he wrote a letter to Strauss about his method of making work pants with metal rivets on the stress points – at the corners of the pockets and the base of the button fly – to make them stronger. As Davis didn’t have the money for the necessary paperwork, he suggested that Strauss provide the funds and that the two men get the patent together. Strauss agreed enthusiastically, and the patent for “Improvement in Fastening Pocket-Openings” was acquired. The rest is manufacturing, marketing and sales history, but apart from the commercial aspect, blue jeans became a powerful cultural phenomenon worldwide.

From Beverly Gordon’s essay ‘American Denim: Blue Jeans and Their Multiple Layers of Meaning’, published in Cunningham and Voso Lab’s Dress & Popular Culture (2006), we learn that since their patenting, “Blue jeans (…) have embodied many different messages, and functioned in different ways—as symbols of rebellion; outlets for personal creativity; emblems of up-to-date, fashionable awareness; and evidence of generational longing and insecurity. Changes in jeans styling, embellishment, and marketing are closely tied to changes in the society as a whole, and these changes serve as a subtle but accurate barometer of trends in contemporary popular culture.” 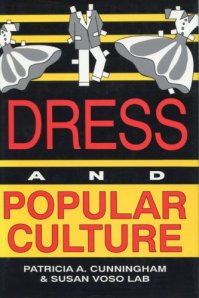 To start with, denim served as a practical, rather than fashionable form of clothing for farmers, the traditional attire we associate with the American cowboy. However, in the second decade of the 20th century, blue jeans suddenly gained a new function within the  Santa Fe Artists Colony: “Jeans were first adopted as a kind of anti-fashion—a conscious, pointed statement that goes against the fashion norm and says, “I am different, I am not like you”—by a group of artists in the Santa Fe area in the 1920s. Generally well-educated individuals of both sexes took to wearing jeans as a badge of their own group identity and special status. They were identifying themselves with the ruggedness, the directness, and the earthiness of the laborer, and were placing themselves as a part of the Western scene. They also adopted a unisex look long before it was the norm. This group of artists continued to sport jeans in the 1930s, but something of the same impulse was also promulgated in the mainstream fashion world. Levi Strauss executives began encouraging Easterners who were taking the newly popular “dude ranch” vacations to outfit themselves with jeans or overalls, and the garments even became available for the first time in up-scale New York stores. Levi Strauss ran an ad in the April 1935 Vogue: “true Western chic was invented by cowboys.” Although the bend did not really take off at this time outside the dude ranch context, this was perhaps the first instance where fashionable consumers were encouraged to take on the aura of a particular lifestyle by wearing jeans.” (Dress & Popular Culture ).

Throughout the history of American popular culture, denim pants or jeans were worn as a sign of anti-fashion or anti-norm by disenfranchised youths. In the 1950s, the era of the Cold War, subversive groups featuring a certain type of social outcast or ‘rebel without a cause’, such as those personified on the silver screen by Marlon Brando and James Dean wore it in nonchalant defiance of social norms. Jeans then became the underground trend of the bohemians and ‘beatniks’of the 1960s, who were, this time, intellectual rebels making a stand against consumerism. Valerie Carnes wrote in an article entitled ‘Icons of Popular Fashion’ (1977), that “Denim jeans became [in the 1960s] the ultimate no-fashion put-down style—a classless, cheap, unisex look 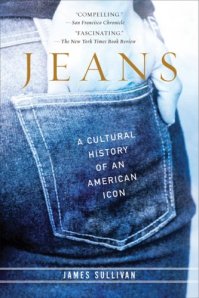 that stood for, variously, frontier values, democracy, plain living, ecology and health, rebellion a la Brando or Dean, a new interest in the erotic import of the pelvis, or, as Charles Reich suggested in The Greening of America, a deliberate rejection of the “artificial plastic-coated look” of the affluent consumer society.” There was a sense in which jeans were becoming a secret uniform in their own right, worn by people of the same values and convictions. They were also a sexless attire, blurring gender lines in an era of feminist upheaval. There was also something perennial about denim: as various ephemeral fashions wizzed past, people stayed loyal to the comfort, informality and durability of its material. It seamlessly molded to its wearer and acquired various idiosyncrasies in its tears, stains and discolourations, becoming an extension of the body and paradoxically, for such a mass manufactured garment, an individual ‘look’, typical for each person wearing it.