Home » History » The Wobbly Beginnings of Motoring in Britain

The Wobbly Beginnings of Motoring in Britain 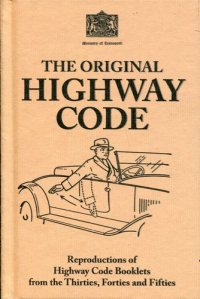 On the 14th of April 1931, the first ever edition of the British Highway Code was published, sold for one penny and containing only 18 pages of advice! Some of it was directed at drivers of horse drawn vehicles to ‘rotate the whip above the head; then incline the whip to the right or left to show the direction in which the turn is to be made.’ The more complete version appeared in print in 1934. In preparation of the code, the Ministry of Transport consulted ‘extensively’ with the Pedestrians Association, seeing as there were merely 2.3 million motor vehicles in Great Britain, yet over 7,000 people were killed in road accidents each year, almost 20 people died every day. Nowadays there are over 30 million vehicles on the road and half that number of fatalities due to improved safety rules and car manufacturer features.

British government policy on road safety in the early years of the car was unpredictable and often unsafe. A very basic rule of caution existed until 1896, requiring cars to be preceded by a pedestrian with a flag and to travel at no more than 2 mph in built-up areas. In later years, the drivers were given more and more freedoms as the pedestrians were the ones reprimanded. “The National Safety First Association (NSFA), with funding from the motoring lobby and industry, deflected responsibility for the rising death toll caused by motoring accidents away from motorists toward the pedestrians and cyclists who were their victims. Pedestrians made up 45 percent of those fatalities in the interwar years. When cyclists were included, the figure rose to between 6o and 70 percent. Drivers constituted less than 5 percent. Yet, pressure from organizations such as the NSFA induced public authorities to pursue policies that focused mainly on the education of the non-motoring population, including school children, and on the planning of roads and motorways to speed the traffic on its way.” (Peter T. Marsh, review of Sean O’Connell’s The Car in British Society in The Journal of Interdisciplinary History, Vol. 31, No. 1, Summer, 2000). In 1930, the motoring lobby achieved its most prominent success when Labour transport minister Herbert Morrison abolished the speed limit altogether for four years!

This first ever Highway Code, which, unusually contained quite a few advertisements within its reduced frame, urged all road users, as ever, to be careful and considerate towards others, putting safety first. However, most of the other aspects of the code have changed considerably since: mirrors were not even mentioned and drivers were advised to sound their horn when overtaking; only a very brief paragraph advised about the rules of crossing the road; it listed a multitude of hand signals the police and road users should use, seen today as an obliterated means of communication in traffic and reduced to a very few in recent codes. “All motor vehicles had to be registered, display registration marks and be licensed annually at a cost of 20 shillings (£1). The fee for the first driving licence, which was obtained over the counter at Post Offices, was 5 shillings (25p). Failure to sign your driving licence with your ‘ordinary signature’ could lead to a fine of up to £5. In 1921, there were only 1 million drivers in Britain. By 1939, this figure had risen to 3 million. But it was only during the 1960s, when cars became more affordable, that motoring really took off. In 1973 the number of drivers had risen to about 20 million and a centralised computer-based licensing system was brought in to cope with the huge increase in demand for both driver and vehicle licences.” (Driving Standards Agency)

In The Car in British Society: Class, Gender and Motoring 1896-1939 (Manchester University Press, 1998), Sean O’Connell deals with “The vexed question of whether the automobile heralded “progress” or “decline” (…) in his cultural history of motoring in Britain during the early decades of the twentieth century (…). In interwar Britain, the relatively slow growth of automobile manufacture and marketing certainly had a solid economic rationale: few outside of the upper and middle classes could afford even an inexpensive automobile. Yet cultural factors influenced manufacturing costs as well. Differing segments of the commercial and professional middle-classes gravitated towards specific car models as a way to signal subtle distinctions in taste and social status, encouraging most pioneering car manufacturers to tailor their car design and manufacture to the upscale market.” So, the progressive adoption of the automobile as a primary means of transport in Britain was based both on the needs and values of the middle classes, and basic utilitarian reasons. Equally, “motoring was gendered primarily as a male activity, and the proportion of women receiving licenses in Great Britain remained low through the early 1960s. The automobile extended the physical mobility of many but by reinforcing gender stereotypes it may have restricted women’s status mobility.”

As always when new inventions are introduced, they were welcomed by contradictory arguments in society: “While many among the

urban middle-classes worried that automobiles were leading to the despoliation of the countryside, they nevertheless embraced the car precisely because it afforded them greater opportunities to escape the city. (…) rural residents, while annoyed at the noise, rudeness, and recklessness of weekend urban travellers, also capitalized on the increasing presence of cars by erecting garages, gas-stations, hostels, and advertising signs. Romantic city-dwellers were usually in the vanguard of rural preservation efforts, which in turn were undercut by the savvy rustics they were trying to save.” (Michael Saler, review of Sean O’Connell’s The Car in British Society in  Albion: A Quarterly Journal Concerned with British Studies, Vol. 32, No. 1, Spring, 2000). The first years of the motorcar were thus instrumental in shaping the cultural and economic future of the Brits in ways which had not been expected.

← Quote Week Returns: Life After Death? The Mystery of The Shroud of Turin →