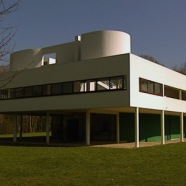 Brinkman and The International Style in Architecture

Posted by ArtLark on March 22, 2020 in Architecture | Leave a comment 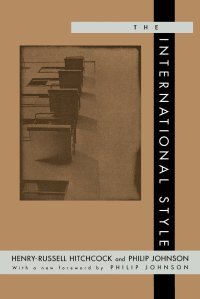 On the 22nd of March 1902, Dutch architect and exponent of Nieuwe Bouwen, (modern architecture in the Netherlands), Johannes Andreas Brinkman was born in Rotterdam. He is perhaps best known for the design of the former Van Nelle Factory, a prime example of the International Style, which his architectural office, Brinkman & Van der Vlugt, drafted for the site on the Schie river in Rotterdam.

Whilst the Van Nelle Factory shows the influence of Russian constructivism, it also bears all the fundamental characteristics of the International Style, a major architectural style that emerged in the 1920s and 1930s, the formative decades of modern architecture. The term originated from the title of a 1932 book by Henry-Russell Hitchcock and Philip Johnson that identified, categorized and expanded upon characteristics common to Modernism across the world and its stylistic aspects. At the request of Alfred Barr, the then director of the MoMA, Hitchcock collaborated with Philip Johnson (and Lewis Mumford) on ‘Modern Architecture: International Exhibition’ held in 1932 at the Museum of Modern Art, showcasing the innovative International Style architecture of Europe to an American audience. Their accompanying book starts with a very precocious quotation from an Apollo magazine article by Salomon Reinach written three decades before, in 1902:

“The light and airy systems of construction of the Gothic cathedrals, the freedom and slenderness of their supporting skeleton, afford, as it were, a presage of a style that began to develop in the nineteenth century, that of metallic architecture. With the use of metal, and of concrete reinforced by metal bars, modern builders could equal the most daring feats of Gothic architects without endangering the solidity of the structure. In the conflict that obtains between the two elements of construction, solidity and open space, everything seems to show that the principle of free spaces will prevail, that the palaces and houses of the future will be flooded with air and light. Thus the formula popularized by Gothic architecture has a great future before it. Following on the revival of Greco-Roman architecture which prevailed from the sixteenth century to our own day, we shall see, with the full application of different materials, a yet more enduring rebirth of the Gothic style.” 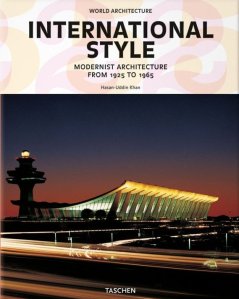 The authors went on to identify three principles: the expression of volume rather than mass, the emphasis on balance rather than preconceived symmetry, and the expulsion of applied ornament. The International Style buildings should be similar through a predilection for “rectilinear forms; light, taut plane surfaces that have been completely stripped of applied ornamentation and decoration; open interior spaces; and a visually weightless quality engendered by the use of cantilever construction. Glass and steel, in combination with usually less visible reinforced concrete, are the characteristic materials of construction.” (Britannica)

The aim of Hitchcock and Johnson was to define a style that would encapsulate this modern form of architecture by the inclusion of specific architects and their work. In their view, further characteristics of the International Style include: a strong simplification of form, the elimination of ornament, and employment of glass, steel and concrete as preferred materials. The transparency of buildings, construction (referred to as the honest expression of structure), and use of industrialized mass-production techniques contributed to the international style’s design philosophy. The machine-automated aesthetic, and minimal design choices would create building function and the look of these erect structures would obliterate any existing historicism. The ideals of the style are commonly summed up in three slogans: ornament is a crime, truth to materials, form follows function; and Le Corbusier’s description of houses as “machines for living”.

In the foreword of a more recent edition of the defining book on the International Style, Philip Johnson, reflects on its legacy: “The idea of style, which began to degenerate when the revivals destroyed the disciplines of the Baroque, has become real and fertile again. Today a single new style has come into existence. The aesthetic conceptions on which its disciplines are based derive from the experimentation of the individualists. They and not the revivalists were the immediate masters of those who have created the new style. This contemporary style, which exists throughout the world, is unified and inclusive, not fragmentary and contradictory like so much of the production of the first generation of modern architects. 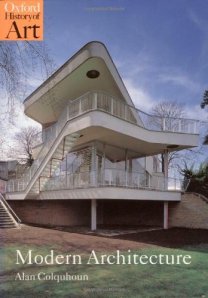 Although nowadays, in spite of the movement’s claim to transcend style limitations, the International Style has been obliterated by various diverse multi-referential forms of postmodern architecture, which go against modernist principles of formalism. Eminent examples of International Style buildings can be seen all over the world; to mention just a few: the Villa Savoye by Le Corbusier in Poissy, France (1931), The Glass Palace by Frits Peutz in Heerlen, Netherlands (1935), the Seagram Building (1958) by Mies van der Rohe and Philip Johnson and Lever House (1952) by Gordon Bunshaft and Natalie de Blois, both in New York City.

← The Beginning of the World According to James Ussher John Lennon: James Joyce’s Illegitimate Son? →