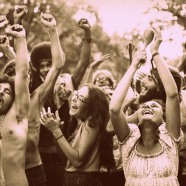 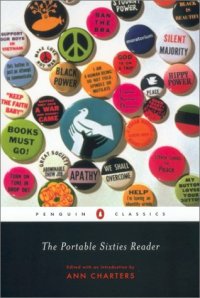 On the 14th of January 1967, The Human Be-In, an event in San Francisco’s Golden Gate Park signalled the beginning of the Summer of Love, which turned the city’s Haight-Ashbury district into the centre point of American counterculture; the world that came to characterise this suburban union was “psychedelic”. Tens of thousands of people gathered for a spectacle which surprised the national media by sheer public enthusiasm. The festival’s organizers, artist Michael Bowen and poet Allen Cohen (also the co-founders of Oracle newspaper), called the event a Be-In, a word-play on the sit-in protests of the civil rights movement, as well as those held at colleges and universities, sometimes referred to as teach-ins.

The Oracle announced on the cover of its 5th issue “A Gathering of the Tribes for a Human Be-In”, a joyous, all-inclusive occasion: “A union of love and activism previously separated by categorical dogma and label mongering will finally occur ecstatically when Berkeley political activists and hip community and San Francisco’s spiritual generation and contingents from the emerging revolutionary generation all over California meet for a Gathering of the Tribes for a Human Be-In. …Music will be played by all the Bay Area rock bands, including the Grateful Dead, Big Brother and the Holding Co., Quicksilver Messenger Service, and many others. Everyone is invited to bring costumes, blankets, bells, flags, symbols, cymbals, drums, beads, feathers, flowers…The Human Be-In is the joyful, face-to-face beginning of the new epoch.” (The San Francisco Oracle, Vol. 1, Issue 5, p. 2)

The Human Be-in was a manifestation of the 1960s American counterculture – on one side were the Berkeley university radicals, who were leaning  towards increased militancy in response to the U.S. government’s Vietnam war policies, and, on the other side, the non-political Haight-Ashbury hippies, who urged peaceful protest – different means but similar goals: personal acceptance, cultural and political freedom, communal ecological living, reaching a higher level of consciousness (with the help of psychedelic drugs), legalization of drugs and liberal politics. 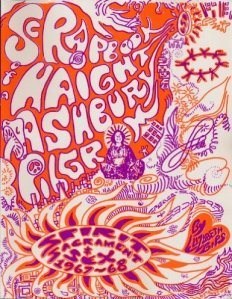 The hippie movement grew from the dissatisfied student communities around San Francisco State and Berkeley and the beat generation poets and jazz hipsters, who both welcomed creative spontaneity and rejected phony middle-class ‘morality’. The eccentric poet Allen Ginsberg bridged the gap between the beat and hippie generations, while Bowen, the main organiser, created the poster, organized the city permit, invited the speakers (e.g. Ginsberg, Snyder, Kandel, McClure, Leary) and scheduled the rock bands (e.g. Grateful Dead, Jefferson Airplane, who played for free). Bowen said that, “The people who were arriving could see that those “famous” individuals, whose work they had read directly, or read about in the media, had also journeyed to the Be-In to simply sit and be with them as equals.” Bowen seems to have considered the Human Be-In as his best performance art creation on a grand scale. The Hells Angels provided security in the venue, and a flatbed truck with amplification driven by a gas generator was donated to create a stage.

“It was not the speeches of Ginsberg, Suzuki Roshi, Leary and the other speakers on the platform or even the music that touched us with mystic wonder. The wires were cut, and for a long while there were no speeches, no music. Only the murmur of 25,000 people, most of them on LSD, grooving with each other, with the sunshine which had come in the midst of a rainy month, and with the manifest presence of Spirit. It was so quiet. Women in lace table cloths, long dresses of oriental fabric, fantasies from every age and place moved gracefully through the silent crowd. Men in pied patterns smiled at the sky. The Diggers gave out turkey sandwiches. Everybody shared marijuana, apples, LSD and love. We knew that we were witnessing a massive blossoming of a new religion in the literal sense of being tied together again. This religion would never have churches or temples; this was a religion based on individual freedom and respect; we “dug each others vibes” and felt the coming together of an ancient family. Time dwindled to a no-point. Heart reached to heart in an almost soundless outpouring of love.” (Elizabeth Gips, Scrapbook of a Haight Ashbury Pilgrim, 1995). 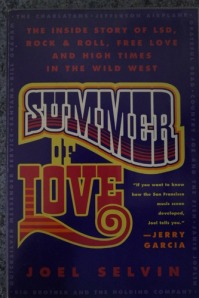 As much as the focus was on deep human connection and selfless togetherness, the Human Be-In was also a heartfelt protest against a new California law banning the use of the psychedelic drug LSD that had come into effect on October 6, 1966. The Golden Gate Park hippies might have been on to something. More recently, researchers from the University of Alabama at Birmingham and Johns Hopkins University School of Medicine, Baltimore, conducted new research which proved that psychedelic drugs could help to keep ex-offenders out of prison. Drugs such as LSD and magic mushrooms could be used to help reform criminals under community correction supervision. Theories that LSD could be used to treat alcohol addiction existed before. Scientists found that criminals diagnosed with a hallucinogen use disorder were less likely to fail the rehabilitation programmes and reoffend compared to those who were non-addicted.