Posted by ArtLark on December 24, 2019 in Christmas, Literature | 2 Comments

We dedicate the festive winter holiday week to inspirational quotes which mark cultural or historical landmarks from around the world.

To keep the  Holy Eve excitement of our childhood alive, here is an excerpt from A Christmas Memory (1956), an autobiographical short story by classic American novelist Truman Capote (1924 – 1984) which has become a literary staple at this time of year: 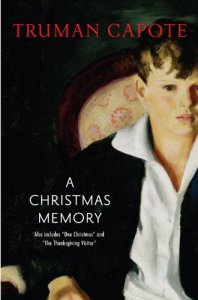 “A trunk in the attic contains: a shoebox of ermine tails (off the opera cape of a curious lady who once rented a room in the house), coils of frazzled tinsel gone gold with age, one silver star, a brief rope of dilapidated, undoubtedly dangerous candylike light bulbs. Excellent decorations, as far as they go, which isn’t far enough: my friend wants our tree to blaze “like a Baptist window,” droop with weighty snows of ornament. But we can’t afford the made-in-Japan splendors at the five-and-dime. So we do what we’ve always done: sit for days at the kitchen table with scissors and crayons and stacks of colored paper. I make sketches and my friend cuts them out lots of cats, fish too (because they’re easy to draw), some apples, some watermelons, a few winged angels devised from saved-up sheets of Hershey bar tin foil. We use safety pins to attach these creations to the tree; as a final touch, we sprinkle the branches with shredded cotton (picked in August for this purpose). My friend, surveying the effect, clasps her hands together. “Now honest, Buddy. Doesn’t it look good enough to eat!” Queenie tries to eat an angel.

After weaving and ribboning holly wreaths for all the front windows, our next project is the fashioning of family gifts. Tie-dye scarves for the ladies, for the men a homebrewed lemon and licorice and aspirin syrup to be taken “at the first Symptoms of a Cold and after Hunting.” But when it comes time for making each other’s gift, my friend and I separate to work secretly. I would like to buy her a pearl-handled knife, a radio, a whole pound of chocolate-covered cherries (we tasted some once, and she always swears: “I could live on them, Buddy, Lord yes I could—and that’s not taking his name in vain”). Instead, I am building her a kite.”