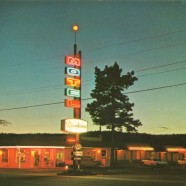 On the 12th of December 1925, Arthur Heineman opened the first recorded motel along Highway 101 just north of San Luis Obispo, California. As he couldn’t fit in the full name ‘Milestone Motor Hotel’ on the sign, he left it as ‘Motor Hotel’, which then came to be abbreviated as mo-tel. This first example of a functional inn-type respite for motorists featured the easily recognisable single building made of connected rooms with doors facing a parking lot. Heineman chose original Spanish missionary architecture for the façade, which together with its bell tower and sign are still standing, although used for a different purpose.

The invention and popularity of the automobile in early 20th century America drove many motorists to venture beyond their hometowns. The early bad roads and poor vehicle speeds and reliability required two or more days all-day driving for 400-mile trips such as Los Angeles to San Francisco. Heineman’s auto camp was ideally situated midpoint between the two. Later, during the Great Depression, the sole travellers remained those on business journeys and salespeople, forced by their employers to reduce costs. So, instead of trains they used cars and stayed at cheap roadside motels, where there was no need to pay for service.

Motels slowly crept into public awareness as small, locally owned businesses which popped up along main roads, two-lane highways going through towns. These roads became populated with orange or red neon signs announcing VACANCY. The symbol of the motel came to define Americanness and nothing could make it more notorious than the cinema. Its transient role as a chance stop-over for weary travellers, the cheap quality of its offerings and dubious background of the isolated communities which usually ran them, presented an intriguing subject for the movies, chiefly thrillers and horrors. 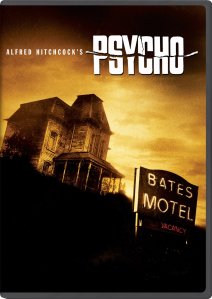 The Bates Motel was an important part of Psycho, Robert Bloch’s 1959 novel. The book was adapted to the silver screen by Alfred Hitchcock’s 1960 Psycho, its sequels and various TV adaptations. The Bates Motel was owned by Norman Bates, a middle-aged bachelor, and his domineering mother, presented as a vile, puritanical old woman who possessively clings onto her son and refuses to let him live his life. The running of this small motel in Fairvale seems to be forced on him by her, but business is slow since the state relocated the highway. “Norman operates a motel no one can find (on a road relegated to nowhere by patterns of postwar highway construction). His management of the motel is weirdly parodic, performing tasks for guests who will never arrive, repeating portions of a welcome speech for the few who do.” (Cynthia Erb, ‘Have You Ever Seen the inside of One of Those Places?  Psycho, Foucault, and the Postwar Context of Madness, Cinema Journal, Vol. 45, No. 4, Summer, 2006). In the middle of yet another argument with his mother, a young customer, Mary Crane, arrives to Bates’ motel, after accidentally turning off the main highway. Exhausted, she ends up dining with Bates and overhears his mother screaming with jealousy that she is going to kill her. Mary questions Norman about his lacking social life and suggests putting his mother into an asylum, but he defends her. Mary says goodnight and returns to her room. A few takes later, in the shower, the outline of a figure resembling an old woman attacks her with a butcher’s knife, beheading her.

The scenario of the isolated motel being run by an inbred weirdo turned deranged serial killer has since been used in a number of other modern horror films, such as Motel Hell (1980), Mountaintop Motel Massacre (1986),  Mayhem Motel (2001), Murder Inn (2005). Amongst the main themes in motel horrors is that of voyeurism, as well as sexual violence. One of the better known recent horrors set in a motel is Vacancy (2007), directed by Nimród Antal and featuring Kate Beckinsale and Luke Wilson. Once again, it starts with a couple taking a wrong turn, on a remote mountain road and coming across this place off the beaten track. The tension and foreboding is intensified by them being cut off from modern communication through the loss of mobile signal. Once the creepy manager Mason directs them to their bleak room, they discover that the videos on offer are snuff movies filmed in the room they just rented, a taste of things to come. 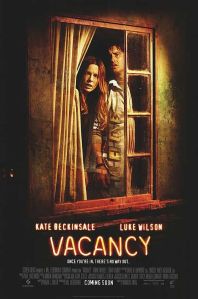 The frights are carefully dosed and psychological in nature and the seedy setting of the isolated, rundown motel where unspeakably sordid events occur is very effective in creating a terrifying atmosphere. Loud bangs coming from adjacent rooms, masked men running to and fro in the forecourt preventing the protagonists from escaping, hidden wall tunnels which lead them to the owner’s voyeurist hub of webcams – capture an interminable cat and mouse chase within the confines of the motel.

On a lighter note, a parody of the urban typecast of the motel appears in the animated series The Simpsons, the Sleep Eazy Motel lighting sign losing some of its neon segments, now reading ‘Sleazy Motel’, a shady stopover promising cheap hourly rates and adult movies. Other labels such as ‘cockroach motel’ and ‘no-tell motel’ feature in some more of The Simpsons episodes, such as Happy Earwig Motel and Worst Western, cementing the notoriety of the motel as an icon of popular culture.