On the 19th of September 1854, English photographer, and a proponent of pictorial or impressionistic photography, George Davidson was born in Lowestoft, Suffolk, England. He is noted as one of the most important figures in the development of Pictorial photography at the end of the nineteenth century. Born into a comparatively modest family – his father was a shipyard carpenter – he was the only one of his siblings who was lucky enough to receive a secondary education. Davidson first took up photography in about 1885 and joined the Camera Club when it opened in November that year, becoming honorary secretary the following year. He first exhibited his work in 1886, showing six pictures at the Photographic Society of Great Britain Exhibition. He became a member of the society in November 1886.

An advocate of naturalistic photography, Davidson experimented widely with different techniques and processes in his efforts to achieve the impressionistic effect which he desired in his work. In actual fact, he was one of the first to use a pin-hole camera for pictorial photography. In 1890, one of his pin-hole images, An Old Farmstead (later retitled The Onion Field) was awarded a medal at the Photographic Society of Great Britain’s annual exhibition. A prime example of the ‘fuzzy’ school of photography, this picture provoked considerable comment and discussion. “Impressionistic photography aroused fierce controversy, just as Impressionist painting had done before. The most vituperative attacks came from P. H. Emerson [British writer and photographer], for Davison had not only gone too far in his interpretation of naturalistic photography; he had dared, Emerson claimed, to lecture on ‘Impressionism and Photography’ without giving credit to the master’s fundamental theo

ries on which impressionism was based. Emerson was enraged by Davison’s assumption of leadership, and his renunciation of naturalistic photography in January 1891 in a black-bordered pamphlet entitled ‘The Death of Naturalistic Photography’—Emerson was always inclined to theatrical gestures-was largely the outcome of violent egotism and offended vanity.” (Helmut Gernsheim, Creative Photography: Aesthetic Trends, 1839-1960)

The emergence of the impressionistic trend in photography changed the overall attitude towards the medium. Whilst advocates of impressionist painting defended rapid brush work as the means of recording transitory phenomena, the photographer could hardly argue this necessity, for the camera could instantaneously capture a scene with detail and precision.  “Some photographers were content with ‘Impressionism’ as defined by George Davison. Blurring the image by optical means (a ‘pinhole lens’, a simple spectacle lens, or a specially constructed soft focus lens such as that designed in 1896 by T. R. Dallmeyer at the suggestion of J. S. Bergheim, a painter) and printing or enlarging it on coarse papa, was indeed still defensible as photographic technique. The erroneous notion, however, that even this failed to give an absolutely satisfactory rendering of nature led for the first time to a new conception of creative photography: modification. The painter, it was argued, is not bound by representation, he gives a free translation of the original, omitting or altering whatever impairs his design. A photographer striving to be an artist in his medium needs similar freedom. He must overcome the limitations of his instrument which restrict his powers of expression. Breaking up of the smooth halftones of the photographic image began to be considered inadequate in overcoming the ‘unnaturalness’ of photography. The required control, it was felt, could be brought about only by modifying the image through manual interference, which would rid photography at the same time of the
never-ceasing reproach that it was a mechanical art. Hand-work, moreover, had the merit—so it was argued—of 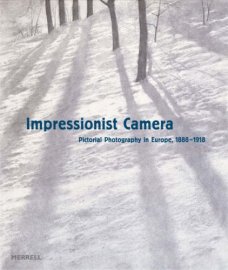 distinguishing the creative photographer from the ever-increasing tribe of thoughtless snap-shooters.” (Gernsheim)

Pictorial photographers considered themselves serious amateurs—motivated by artistic forces rather than those of financial gain. In Europe they formed salons and clubs like The Linked Ring Brotherhood, The Royal Photographic Society (of England) and The Photo-Club of Paris. And in America in 1902, Stieglitz established the group called the Photo-Secession. He chose the name “Secession” because of its use by some societies of avant-garde artists in Germany and Austria to denote their independence from the academic establishment.