Posted by ArtLark on June 20, 2019 in Philosophy, Sociology | Leave a comment

On the 20th of June 1723, Enlightenment philosopher and pioneering sociologist Adam Ferguson was born in Logierait, Perthshire, Scotland. “Ferguson is chiefly remembered for the Essay on the History of Civil Society (1767), an intellectual history that traces humanity’s progression from barbarism to social and political refinement. In his philosophy Ferguson emphasized society as the wellspring of human morals and actions and, indeed, of the human condition itself.”

Alongside fellow Scottish philosophers Adam Smith and David Hume, Ferguson supported the concept of spontaneous order claiming that coherence and even harmony can ensue from the uncoordinated actions of a group of individuals. In his writing, he was visibly sympathetic to traditional societies, in which courage and loyalty prevailed and made a case against commercial society for producing weak, dishonest  men, disinterested in the greater well-being of their community. He put a strong emphasis on social interactions and thoroughly criticised the abandonment of civic and communal virtues brought on by commercial growth. He feared that the latter could ultimately lead to a collapse in society similar to that suffered by Rome.

A great religious Presbyterian believer, Ferguson held that a higher power could coordinate progress and human free will, but also that humanity would eventually gain sufficient knowledge, through its own actions, to govern itself. Ferguson believed that civilization is largely about laws that restrict our individual freedom but provide liberty in the sense of security and justice.  His opposition to social chaos and popular demonstrations is consistent with his overall conception of social progress. He dreaded social rebellion because he thought that it may destabilize lawful government – in his view, social unsettlement usually leads to one ruler abusing power (despotism). He wrote at length about the importance of what we perceive today as empathy, referring to it as “fellow-feeling” which he saw as an “appurtenance of human nature” and as a “characteristic of the species.” His friend and fellow philosopher Adam Smith referred to this concept as mutual sympathy. 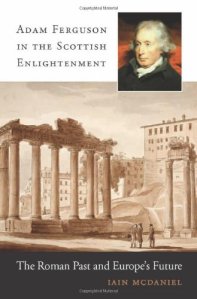 critique of personal relations before the rise of commercial society is similar to many later made of capitalist culture by its hostile critics: “In societies where men are taught to consider themselves as competitors, and every advantage they gain as comparative to that of some other person, the conscientious [man] may be faithful and true to his engagements . . . ; but . . . interested and sordid (men) make no allowance for good or ill offices that neither empty nor fill the pocket.” Such societies do not offer the possibility of disinterested relations, insulated from the clash and calculation of interests; the development of the market does so (…) Where vital resources are not created and distributed impersonally by markets and bureaucracies, one has no choice but to be, in Ferguson’s disapproving phrase, “interested and sordid” in all interactions, concerned only with whether they “empty [or] fill the pocket,” because in such settings it is largely by what modern culture and theory consider personal relations that vital resources are obtained, friendship becomes a virtue that contributes to the public good of civil society.” (Public and Private in Thought and Practice: Perspectives on a Grand Dichotomy, University of Chicago Press, 1997).

Thomas Reinert wrote how, interestingly, Ferguson believed that, in history, this much needed public spirit survived and was propagated through stories and fiction. He claimed that the 18th-century philosopher viewed society in an aesthetic light, as a kind of imaginative work, such as a poem, or a novel. Ferguson wrote: “Fiction may be admitted to vouch for the genius of nations, while history has nothing to offer that is entitled to credit. The Greek fable accordingly conveying a character of its authors, throws light on an age of which no other record remains. The superiority of this people is indeed in no circumstance more evident than in the strain of their fictions, and in the story of those fabulous heroes, poets, and sages, whose tales, being invented or embellished by an imagination already filled with the subject for which the hero was celebrated, served to inflame that ardent enthusiasm with which this people afterwards proceeded in the pursuit of every national object. (Ferguson, An Essay on the History of Civil Society).

“Fictions document the “conceptions and sentiments of the age in which they were composed”, but they are not merely a record. Ferguson suggests that there is a cyclical process: in Greece, public spirit showed itself in the 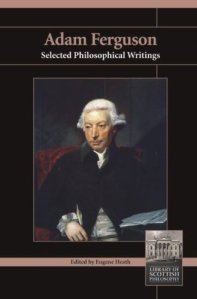 imagining of “fabulous heroes” who in turn inflamed the people’s enthusiasm. The fiction was part of the larger social effort of imaginative self-constitution in which the community itself was a kind of poem. Ferguson elsewhere acknowledges critics who complain that Greek fiction distorts and conceals real history, but he insists on the value of fiction’s social role. It is a proof of the “superiority” of the Greeks, he urges, that they attributed so much authority to their own imaginative promptings, for these promptings consolidated the feeling of group solidarity.” (Thomas Reinert, ‘Adam Ferguson’s Aesthetic Idea of Community Spirit’, Studies in English Literature, 1500-1900, Vol. 48, No. 3, Restoration and EighteenthCentury, Summer, 2008).

← Jerome Myers: Painter of the Underdog Jacqueline Livingston: Male Nudity Against the System →