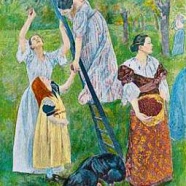 On the 14 of June 1926, American Impressionist expatriate Mary Cassatt died in Château de Beaufresne, near Paris, at the age of 82. Usually remembered as a painter of sentimental images of mothers and children, Cassatt is not generally considered as an artist of radical beliefs. In Eve’s Daughter/Modern Woman (University of Illinois Press, 2004), academic Sally Webster reframed Cassatt’s work through the prism of a 58 x 12 foot mural entitled Modern Woman. She created this as a result of a commission for the north tympanum over the entrance to the Gallery of Honor in the Woman’s Building at Chicago’s 1893 World’s Columbian Exposition. “Cassatt was not widely known in the United States in 1892, and her decision to accept the commission was made in part to help promote her work in her home country. The challenge also intrigued her. In a letter to her friend, the collector Louisine Havemeyer, she wrote: “When the Committee offered it to me to do, at first I was horrified, but gradually I began to think it would be great fun to do something I had never done before…”. That is one of the most intriguing aspects of the commission. Cassatt had never painted a mural; moreover, she was not a painter of symbolic subjects or allegories. She was, like her Impressionist colleagues, a painter of modern life, capturing in particular the domestic realm of family and friends in which she lived and worked.” (Caroline I. Harris, review of Eve’s Daughter/Modern Woman: A Mural by Mary Cassatt by Sally Webster, in Woman’s Art Journal, Vol. 27, No. 2, Fall – Winter, 2006).

Unfortunately, after the Women’s Building was later pulled down, Cassatt’s mural was lost. However, some photographs were taken and artificially coloured prints (see feature image) were made of the images. The aim of the Women’s Building was to exhibit the progress of women throughout history. In the only comprehensive evaluation of the mural thus far, Webster proved that Cassatt was more than successful in meeting this goal and more than apt in working in the predominantly male-dominated, physically challenging medium of large-scale mural painting.

Cassatt designed her mural as an allegorical triptych, with the central panel and the core of it titled Young Women Plucking the Fruits of Knowledge or Science. This middle part featured contemporary women picking fruit from a contemporary “tree of knowledge” and passing it on to the younger generation. The left panel was an image of Young Girls Pursuing Fame and the right panel displayed young women engaged in activities associated with the Arts, Music, Dancing. In a typical Impressionist fashion, Cassatt worked from nature and it is said that she was directly inspired by the orchard behind her summerhouse at Bachivillers. Webster pointed out that all the figures in the mural wear uncorseted French-style day dresses perhaps reflecting the health concerns of the women’s dress reform movement. Interestingly, in the mural’s left panel, young girls recklessly race after fame, refusing to be bound by domestic  responsibilities or to accept a submissive stance in life. Their flight is, however, exaggerated and perhaps Cassatt uses the opportunity to poke fun slightly at the fervour of some of her young female contemporaries’ revolt against the social constraints of their time. 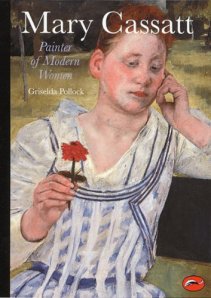 In a Woman’s Art Journal review, Caroline I. Harris  wrote: “Any Western image of women in a gar den picking apples resonates with the long history of representations of the fall of man in the Christian tradition. Such works illustrate the serpent’s temptation of Eve with the forbidden fruit of the knowledge of good and evil. Eve in turn convinced Adam to taste of the fruit, and in punishment God expelled them from paradise. Webster points out that the iconography in this panel was unique. Cassatt subverts the traditional story, reinterpreting the role of woman. No men appear in her idyllic garden, and the knowledge passed from one person to another is not forbidden or given in shame, but rather is a generous sharing among equals. Cassatt’s reinterpretation, Webster argues, can be understood in relation to discussions of the role of Eve taking place within the debate about women’s education and role in society in the late nineteenth century.”