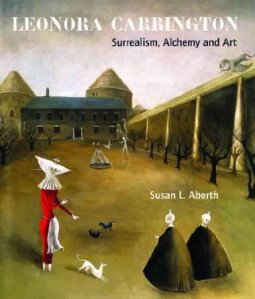 On the 6th of April 1917, the Surrealist painter Leonora Carrington was born in Clayton-le-Woods, Lancashire, England. The artist and writer lived most of her adult life in Mexico City, and was one of the last surviving participants of 1930s Surrealism. Carrington had a famous love affair with the German artist Max Ernst whose work she discovered at the 1936 International Surrealist Exhibition in London.

The two artists met at a London party in 1937 and Carrington returned with him to Paris where he promptly separated from his wife to be with her. They settled in the south of France and even started working together. However, trouble was brewing with the outbreak of WWII when Ernst got arrested, first by the French authorities for being a German, later by the invading Nazis for what the Gestapo censored as decadent work. Ernst managed to escape to America assisted by the wealthy art patron Peggy Guggenheim, whom he married a couple of years later. Carrington was left behind heart-broken and fled to Spain, where she suffered a terrible nervous breakdown while staying at the British Embassy in Madrid. Her parents had her institutionalized, and she was given “convulsive therapy” with cardiazol, a powerful anxiogenic drug that was eventually banned by the authorities. Much of this she recorded in a subsequent book. 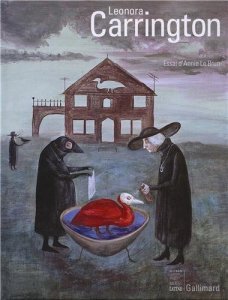 “The events described — brutal institutional therapies, sexual assault, hallucinatory drugs and indescribable filth — are horrifying, but it was never clear what was real and what surreal. In the earlier version she describes a sexual assault by a gang of Spanish soldiers whose attempts at rape she fends off heroically until they finally give up, exhausted; in the amended version, the soldiers rape her “one after the other” before casting her out alone. Some have suggested that at least some of the stories should not be understood literally but as magic realism — a response to her own mental state and events at the time. The sense of a hybrid world (half recognisable, half fantasy) was characteristic of her playful and vividly coloured paintings as well, many of them populated by strange and slightly menacing figures — elongated women in big cloaks, many-armed lizard-snakes, creatures half-human-half-wolf, people turning into birds, faces within bodies — often combined with arcane occult or religious symbols.” (The Telegraph, 26 May 2011).

After being released into the care of a nurse who took her to Lisbon, Carrington ran away and sought refuge in the Mexican Embassy.  Ernst and Carrington had experienced so much misery that they were unable to reconnect. Three years after being released from the asylum and with the encouragement of André Breton, Carrington recorded the events of her psychotic experience in her memoir, Down Below (1944, revised 1988). She also concentrated on creating art which would capture her experiences. This is evident in works such as Portrait of Dr. Morales and Map of Down Below. “Carrington’s short story “Down Below” (published in New York in 1944 in the Surrealist periodical VVV) contains an account of her experiences during the next months, the harrowing story of the collapse of her world and her mental breakdown.” From the cardiazol, a powerful, shock-inducing drug, she was filled with images of pain and violence. 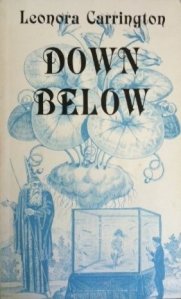 In the language of the alchemist’s journey to self- knowledge, Carrington also tells the story, in “Down Below,” of a psychic quest for autonomy. Drawing heavily on the symbolism of the alchemical laboratory, she attempts to structure her understanding of psychic reality by using the language of alchemical lore. Carrington had never shared Surrealism’s interest in Freud and the Freudian language of the dream and the unconscious; her earliest paintings rely on a magical realism based on autobiographical detail, legend, and personal symbolism. The use of alchemical imagery enabled her to establish more profound connections between individual perception and cosmic unity.” (Leonora Carrington: Evolution of a Feminist ConsciousnessAuthor(s): Whitney Chadwick urce: Woman’s Art Journal, Vol. 7, No. 1 (Spring – Summer, 1986)

← The Art of Swinging According to Jean-Honoré Fragonard Was El Greco Astigmatic? →